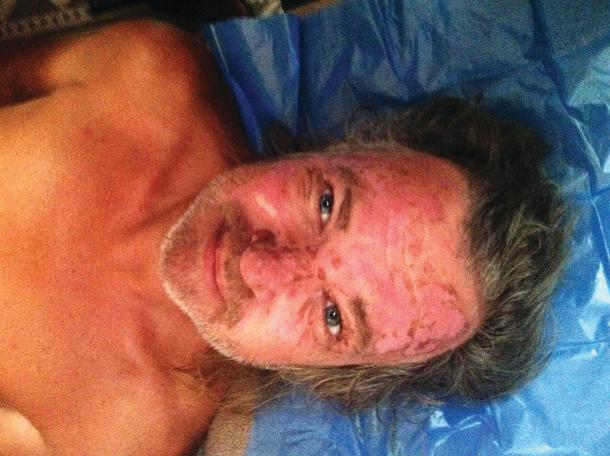 Over sundowners one evening a topic of discussion debated the safety of gas stoves versus kerosene stoves on board. Of course, one could argue the negatives and positives of both.

Helmet and Cornelius, aboard Panta Rai, had a kerosene stove on board and were adamant it was the only way to go as they believed that gas on board was very dangerous. It goes without saying that a gas explosion would have the most devastating outcome.

My husband Bryan and I witnessed a gas explosion when we were anchored off Kudat, in Sabah Malaysia. Local fishing boats were all tied together near the shore. Crew off one of the boats was cooking with gas when all of a sudden it exploded in a boiling liquid, expanding vapour explosion (BLEVE).

Screaming and panic could be heard from the shore as the flames leaped into the sky. Boats were rapidly pulling up their anchors from the shore and heading out into the harbour. The spectacular fire travelled out to sea from the fuel spill and we were forced to move our boat out of its path. The explosion resulted in loss of life, serious injuries and two boats burnt to the waterline.

Much later, we were tied up to a dock in a marina in Kuala Terengganu on the east coast of Malaysia. Helmet and Cornelius had travelled in company from Singapore to Kuala Terengganu, they were anchored off in the bay.

It was early morning and I was busy doing my washing on the dock when I heard the familiar sound of Helmet and Cornelius’s dinghy. It was always recognisable as Helmet knew two speeds only: stop and flat out.

As their dinghy pulled up to the marina Cornelius jumped out and came up to me saying “Glee I have had an accident” I took one look at his face and it was immediately evident what the accident had been. His face was black, his eyebrows missing and parts of his hair burnt as result of fire. His hands were covered in large blisters.

As I led him into the air-conditioned comfort of our saloon the story unfolded. He had been about to make morning coffee for himself and Helmet. Cornelius had placed some jelly alcohol, which they had purchased in Kuala Terengganu, into the recess of the kerosene stove and lit it to prime the kerosene stove.

Still only half awake he thought the alcohol had not stayed alight, so he squeezed some more onto the stove. With this action, due to the fact the alcohol was already alight, there was an explosion with flames leaping out at him, onto the curtains and ceiling of the boat. He quickly called for Helmet, who at that time was still in bed, screaming “Fire! Fire!”

Cornelius then dove into the water to put out the flames on him and to cool the burning. He stayed in the water for about 30 minutes while Helmet put out the fire.

Before retiring from the workforce I worked as a paramedic and, as a consequence, always keep a stocked first aid kit on board. It includes management for burns, in the refrigerator is a selection of various Burn Aid sterile gel burn dressings, which I quickly applied to Cornelius’s face and hands to continue the cooling process and aid in pain management.

When the skin was cool to touch I examined the burnt area to determine the degree of burns. Most of the burns to his face appeared superficial, but the burns to his hands were consistent with partial thickness burns with large blisters encompassing the back of the hands and the webs of his fingers.

After approximately one hour with the Burn Aid gel dressings in situ I removed them, cleaned the area with saline, applied Silvazine cream and redressed the burn areas. I advised Cornelius he would need to seek further medical advice since any burns to the face should always be referred for medical attention; burns to the face may affect the airways.

Burns to the hands can cause muscle contracture if not treated correctly and any burn larger than a twenty cent piece all require medical attention. Cornelius had all these factors, but declined to seek medical attention.

The Burn Aid gel dressings had assisted with pain management and Cornelius advised he had some tablets on board for pain relief during the night if required. Helmet had also sustained a burn to his ankle, which had blistered but he refused any help stating “I will be okay”.

The following morning Cornelius returned for me to assess the burns. His face was quite swollen and blackened further, partly from the Silverzine cream. I gently cleaned the burnt area with saline and this time I was more insistent he seek medical attention due to considerable swelling of his face. He was not keen to do this but, with further discussion and gentle coaxing, we were in a taxi and on our way to a medical centre.

On arrival Cornelius was reviewed by a doctor. The doctor photographed the burns and sent off the photos to a specialist who advised he would require to be admitted to the hospital. Cornelius was most adamant he would not stay, so the staff cleaned the burns, redressed them and we left the clinic.

The blisters were burst, dead tissue cut away and Silvazine cream applied to the area. Cornelius returned to me daily for dressings until the area was such that I could apply dressings that would stay on, allowing for the bodies normal healing process to take place.

Within two weeks the area was healing well, Helmet on the other hand who had refused any treatment was suffering with the burn to his ankle, healing was slow and it took quite some time before he was pain free. Helmet was left with a scar on his ankle as a reminder of the ordeal.

As for Cornelius I am very pleased to be able to report that he was left with no scarring and no restriction of movement in his hands.

Cruising is not just all about fair winds, calm seas and sundowners. It is also about being prepared for accidents that can happen at any time. Sometimes as cruisers we are miles from medical help, knowing what to do and having the resources aboard could make a huge difference to the outcome of the ill or injured person.

If you are embarking on a life as a cruiser the first thing that should be a ‘must’ is a first aid course. Remember what we do in those first minutes could save a life or limb.

When setting up my first aid kit on board I looked at possible scenarios that we may encounter. Fire was up there on the list.

The basic treatment for burns, if you do not have a first aid kit to hand: running water for approximately 20 minutes to cool the burn and cling wrap once cooled. Cling wrap keeps the burn clean and it also keeps water in the wound but, as well as that, a lot of the pain you feel is from superficial exposed nerve endings. When you put cling wrap over the top, it covers it up.

Further management for burns aboard our vessel includes various sized Burn Aid gel dressings, non-adhesive sterile burn dressings, bandages and Silvazine cream. Aboard we have four fire extinguishers and a fire blanket and of course a water bucket.

Chance of a fractured limb is another high risk, so we have a selection of moulded splints and triangular bandages to secure them in place and pain management.

For those every day cuts and grazes we have a good selection of bandages and band aids as my experience aboard has been that these are used the most.

Accidents can happen at the worst possible time and it is not always just to someone else. Be safe, be prepared. ≈