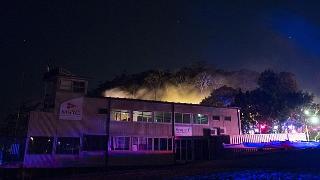 A fire on Sunday night at the Middle Harbour Yact Club in Sydney has caused an estimated $500,000 worth of damage.

According to a report by Matt Bamford in the Daily Telegraph, the blaze is believed to have started in the restaurant at about 11pm. It spread to the ceiling and caused damage in adjacent rooms.

Police were unsure of what caused the blaze but were treating it as suspicious.

The Australian Sailing Team are tenants at Middle harbour Yacht Club and we are using parts of the offices for our performance staff and also have equipment stored at MHYC.

A spokesperson for the AST said: “As tenants at MHYC, we have spoken with MHYC management about the fire this morning and our staff are onsite and awaiting permission to access. As per the newspaper article, police and emergency services have closed off the area and are currently investigating so we don’t know at this stage to what extend our rooms have been affected. At a minimum we expect water damage as the fire was on the upstairs level where the club has its dining area and kitchen. We hope to get access to the premisses later today to assess the situation. ”