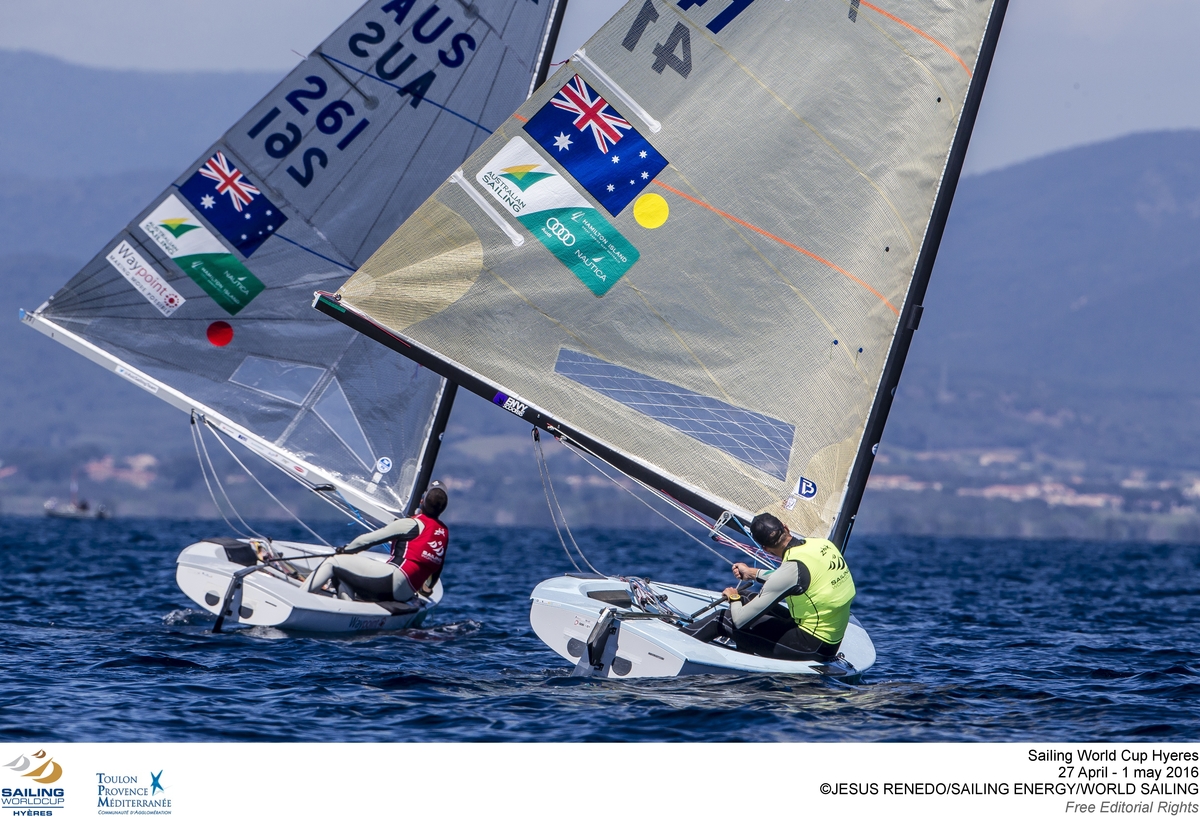 With just two days to go until the start of the Hempel Sailing World Championships 2018 in Aarhus, Denmark, the Finn fleet is making final preparations and controlling its excitement as the first race day approaches on Thursday.

The result of years of preparation and practice will be realised over the next 10 days as nearly 100 Finn sailors from more than 40 nations compete for just eight country places at the Tokyo 2020 Olympic Games. Also at stake is one of the most sought after prizes in dinghy racing – The Finn Gold Cup – which comes with more than 60 years of heritage and prestige.

It is the second most important regatta for Finn sailors in the quadrennium and the field is the deepest that the class has seen at a world championship since the 2014 event in Santander. With one notable exception everyone is here to try and win one of those elusive places, or gain the necessary experience to qualify at a later date.

As many sailors have discovered while training in Aarhus over the previous weeks and months, the conditions can be very tricky. Most are expecting a high-scoring regatta, so there will be a high emphasis on minimising mistakes and sailing consistently throughout the 11 race series. The six race qualifcation series will be followed by a four race final series and then the all important medal race, scheduled for Thursday 9 August.

The fleet includes 16 sailors who competed in Rio in 2016, as well as sailors with three Finn world titles, three Finn European titles and one Olympic Finn bronze.

So far this season there have been several sailors finding good form, and one of these is the 2013 world champion, and current World No 1, Jorge Zarif, from Brazil, who recently started working with a new coach, Robert Scheidt. Zarif won in Hyeres and at the World Cup final in Marseille.

He said, “It’s been a long season, sharing time with the TP52, with a lot of changes in the mast and sails, and with Robert Scheidt coaching me…I have a shot at qualifying the country now and that’s the main target.”

“It’s gonna be really tough, it’s only eight nations qualifying for the Games, and in my opinion almost 20 countries have the chance to do it now. It’s the second most important event of the cycle after the Olympics, because qualifying now gives you more time to think about the conditions in Enoshima.”

“Clearly people are getting into better racing and physical shape. Some guys are coming back strong after a season off. It’s gonna be really close like it was in the Rio Olympics between 3rd and 11th.”

On his own preparation, “Nothing really different, I spent 20 days training in Aarhus in June-July, and that was good because it is such a hard place to sail with currents, wind shifts, waves, clouds… Then I went home for some days of rest; I was 100 days straight in Europe, and I miss the caipirinhas!”

All of the top 30 world ranked sailors are competing except the current Olympic champion Giles Scott, who won in Miami and Palma, but pulled out of Aarhus to focus on his America’s Cup campaign with INEOS Team UK. He leaves potential British qualification in the hands of a very strong squad that includes World No 6, Ben Cornish and current European champion Ed Wright.

Cornish said, “I’m excited about the worlds. Of course this is the event of the year for everyone. I love Aarhus and I am sure that the event will be run in a fantastic manner. There is no question this event will be the pinnacle of the year. The chance to leave Aarhus with the Gold Cup is the reason everyone will be fighting for every inch over the week.”

On his preparation, “It’s all gone according to plan. This event was outlined last year as a peak target and I have certainly done all I can to be in the best place. I made some clear equipment calls with a good period of time to become comfortable with what I will race with. We have also had some really good training camps in Aarhus now and have experienced a lot of conditions that the venue offers.”

“However, I am sure for many guys it’s a huge opportunity to qualify their nation. The competition will be intense and I don’t doubt that everyone will be at the top of their game. I am coming into the Worlds hungry for competition and excited about racing. That’s always a good place to start.”

Wright was also looking forward to the start of racing.

“It’s been an interesting year with lots of performing athletes; many sailors are going fast. It’s also the worlds so tension will be high as everyone needs a needs a good result. I always love to see how high the levels goes.”

“It’s a very shifty venue so probably consistency will prove strong and split fleets always has its victim. The great thing about Aarhus is we should get all wind conditions but generally flat water.”

Anders Pedersen, from Norway, finished disappointing 17th in Rio, but is now looking to qualify for his second Olympics, and has had a good 12 months with many top 10 finishes.

“This worlds is going to be challenging. The fleet has never been stronger, the challenging conditions in Aarhus bay, and the dividing into two fleets. It will be great fun racing, and I am really looking forward to start racing.”

“I think many guys have got to an extremely high level now that everybody peaks for this main event of the year. Everyone seems focused and in the ‘zone’.”

“The conditions in the bay are really challenging. Both directions is hard, so it will be important to keep the head out of the boat and have eyes open.”

On his own build-up, “The final weeks have gone to plan. We stayed here for training, and just had a week off at home, so we have come back fresh and ready to fight.”

The Australian team has brought a very strong group that includes Rio Olympian Jake Lilley, Oliver Tweddell and 2012 Laser gold medalist Tom Slingsby in his first Finn championship. Slingsby took part in a few domestic events in Australia earlier in the year and then started full time in May. How he will perform here is a matter of some discussion. The team is coached by Rafa Trujillo, a former silver medalist.

From France, the 2017 European champion Jonathan Lobert is sure to figure near the front. He has been training with several youngsters who are showing increasing promise, which bodes well for the future of the French Finn squad.

Croatia’s team consists of the 2017 Europeans bronze medalist Milan Vujasinovic, who narrowly missed selection to Rio, as well as Josip Olujic and Nenad Bugarin, who have both put in notable performances over the past year.

And then there is Zsombor Berecz, back from six months off since breaking a finger doing a good deed just before the European championship in Cádiz in March. He says he is back to full health, looks fit and ready to take on the world. Only time will tell if the enforced break has slowed him down, but it would seem unlikely.

The fleet also includes eight sailors who have taken part in the World Sailing Emerging Nations Program in conjunction with the Finn class. The class has brought sailors from Bermuda, Cuba, Iran, Hong Kong, Namibia, Serbia, South Africa and Venezuela and they have just taken part in a clinic funded by Aarhus 2018, the Finn Class and World Sailing, along with a partnership with North Sails UK to provide discounted sails through the International Finn Association. The coaching was undertaken by former Finn sailor Mads Bendix, with help from Paul Hobson of North Sails. It has been a very successful initiative from the class to bring several emerging and new nations to the Finn fleet.

Part 2 of the Finn class preview will be published on Wednesday when we look at some of the other contenders.