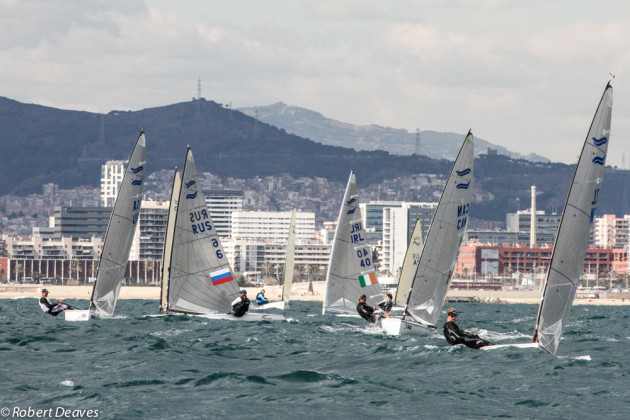 The 2016 Finn Senior and Junior Open European Championship was opened Saturday night in a cozy ceremony on the balcony of the Barcelona International Sailing Centre overlooking the blue waters of what will become this week's race course. On Sunday the sailors completed last minute preparations and measurement before the practice race in what could well be the best wind of the week.

The weather so far has been good for the sailors with challenging, offshore moderate to strong winds and blue skies. However some forecasts for the coming week show a different kind of challenge with light winds moving in. The practice race was held in near perfect conditions with the impressive sailing centre structure as a backdrop. Max Kohlhoff (GER) led round the top mark in an onshore and cold 10-12 knots but as usual the fleet only did the first lap before heading in. Josh Junior (NZL) showed some good downwind speed to lead the fleet back to the club.

At the close of the day 90 sailors, including 21 Juniors, had registered to compete in what will be one of the most intense weeks racing of the year. Many nations are using the week as part of their Olympic trials process and many also also using it as a final warm up to the last Olympic qualifier in Palma at the end of the month.

Racing begins Monday with ten races scheduled until next Saturday when the final race and the medal race will be sailed. The first race Monday is scheduled to start at 12.00.