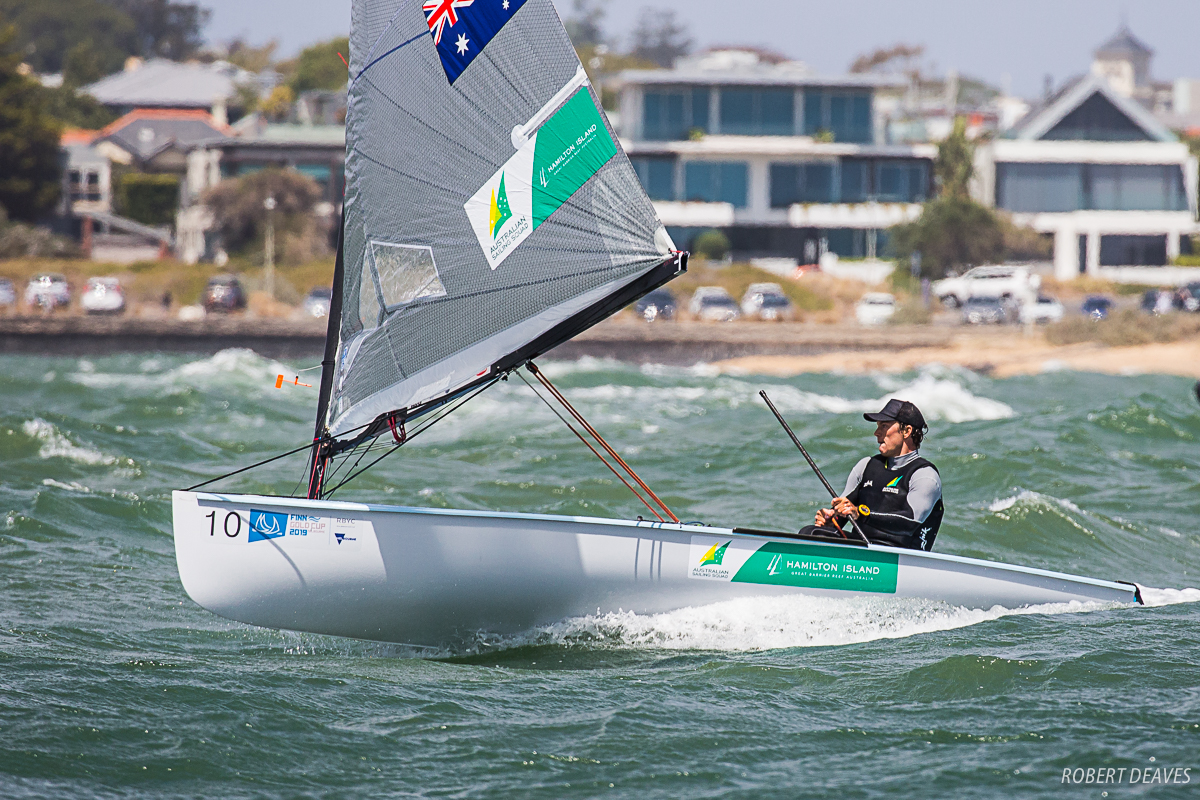 The 2021 Open and U23 Finn European Championship gets underway in Vilamoura, Portugal, on Monday with around 49 sailors from 29 nations completing measurement and registration over the weekend. Over the coming week 10 races are scheduled up to Friday 16 April.

The furthest travelled for this event and taking part in his first major Finn event since 2019, is Jake Lilley, from Australia.

“It’s really nice to re-connect after an extended period away. It was great action when we were all together for the Gold Cup in Melbourne, so I’m really looking forward to more racing at the Euros and Gold Cup in Portugal this year,” Lilley said.

While he has not been racing in world quality fleets as usual, he has been able to train in large fleets in Australia

“Training in Australia has always presented its blessing in the Finn. We have beautiful conditions year round and the fleet is really thriving Down Under. My home club (RQYS) has 40 boats alone. It was amazing to be racing weekends with 30+ guys when the rest of the world was in lockdown. So it’s a bit of a disconnected feeling to what everyone else has had to go through.

“I’m also super lucky with coach Rafa [Trujillo] and Finn legend, Anthony Nossiter, throwing their righting moment around for the long upwind slogs in domestic training. I think having the old school smarts and the help from two heroes is a beautiful thing and puts us in really good stead with speed and preparation. So it’s just up to me to put it all together on the racetrack now.”

Two of the British sailors have come almost direct from the America’s Cup in New Zealand. While Giles Scott, is preparing to defend his Olympic title in Tokyo in August, INEOS Team UK grinder, Ben Cornish, is also back in a Finn for a while, though he says it’s not a comeback.

“Giles asked if I could come and do some training with him, in his compact build-up the Olympics this summer. Of course I couldn’t say no.

“It’s certainly not a comeback for me, but it’s a rare opportunity to compete in the Finn for pure enjoyment. Having been on the grinding wheel with the America’s Cup at INEOS Team UK for the past three years it’s refreshing to be thinking about ‘conventional’ racing and decision making, and of course with so many people I enjoyed racing over the past years.”

Cornish, who dropped out of his Olympic campaign and joined INEOS Team UK after the decision to drop the Finn from 2024 is expecting a very high standard of competition. “It’s clear to see that people have spent a lot of time training this winter and beyond through lockdowns. As we know people are looking to find form in Olympic year so I expect to see some strong results within the fleet.

“I hope the venue delivers some good racing conditions and everyone can have an enjoyable week out on the race course.”

Norway’s Anders Pedersen has already qualified for Tokyo and is happy with his progress over the winter.

“Winter training has been really good, one of my best. Sailing at Lanzarote has given us amazing condition all winter, and I’ve been lucky to have been part of a strong training group pushing every session.

“Vilamoura has shown its light side over the past days. It’s a nice club with helpful and friendly people, so I really like it here, although I prefer a bit more breeze. Next week looks like a bit more wind so fingers crossed for that one.

“It is really great to be back racing, and seeing many of the competitors for the first time since Palma last year. I am really looking forward to getting into racing again. It’s an Olympic season with the last qualifier coming up next month, so you can feel some tension building up.”

One of the favourites in Vilamoura is Nicholas Heiner. After a string of podium places in recent years, including runner up at the 2019 Finn Gold Cup, he is still looking for that first major win, but says the priority at the moment is just to get back racing.

“I’m really looking forward to getting into some high level fleet racing again with everyone back in the fleet again except the kiwis. It feels like a big reunion on the harbour at the moment with some lost boys back in town, so good to see everyone again and I think it will be amazing to have some proper racing again.

“For us we’ve had a really good winter and of course had a lot of boats down in Lanzarote so we did quite a lot of small races and training with other teams. I think we are pretty happy where we are and how we came out of the winter but we’ll see how that goes in some proper racing and see who did well over the winter and who does well at the Euros and worlds. But of course we have a little bit of time left before the Games.

“We’ve only been training here three days and it’s been fairly typical Vilamoura with light winds and an underlying swell, though yesterday we had an amazing day with a really nice swell, 10-16 knots and nice waves.

“I’m looking forward to quite a diverse week that is forecast at the moment with some different conditions, so looks like we’ll have a nice all round event and I think it will be good.”

With registration and measurement now completed, the first races are scheduled to get underway at 12.00 Monday, with two races per day through to Friday.