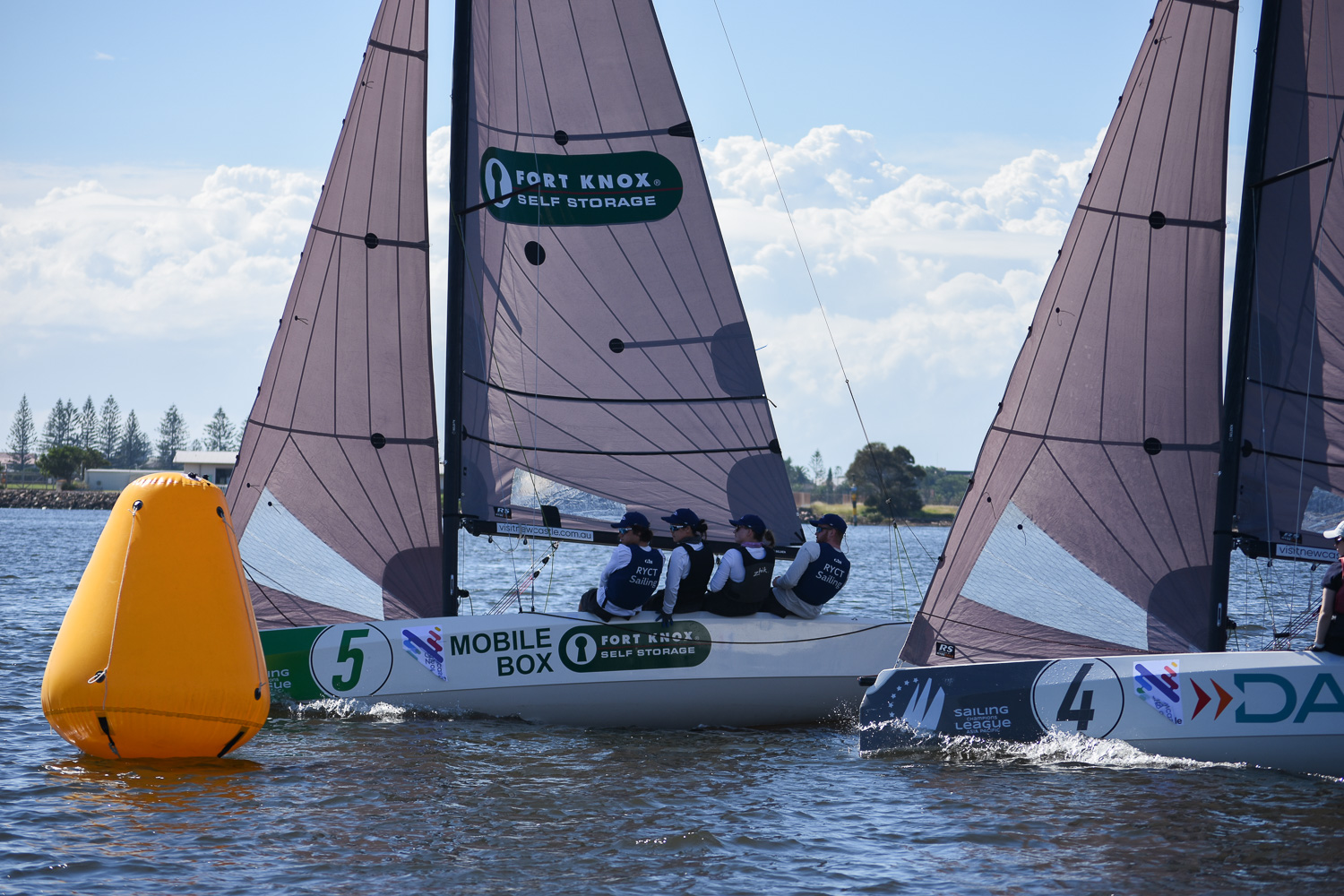 The Royal Yacht Club of Tasmania in action at the SCL Asia Pacific Final. Photo Down Under Sail.

The Royal Yacht Club of Tasmania has claimed the ‘best sailing club’ crown, their exemplary crew work in gusty westerlies and ability to strategise under pressure landing the young team the Sailing Champions League: Asia Pacific 2021 open win in Newcastle.

Winning skipper Sam King was inundated by calls from home immediately after their victory was broadcast live. “I’ve had so many calls from our yacht club and all the family. I just got a call from my grandma, she is stoked for us,” said the grinning skipper, a second year naval architecture student.

From the series outset on Friday morning to the deciding race on Sunday afternoon, April 11, RYCT’s King, Chloe Fisher, Alice Buchanan and Charlie Zeeman quietly went about getting the measure of the nine other club teams.

RYCT’s qualifying series top result earned them a precious one point advantage going into the first-to-two wins final that was delayed when the wind funnelling down the Hunter River climbed to 25 knots on the racetrack adjacent to the viewing platform at the waterfront Honeysuckle Hotel.

Royal Sydney Yacht Squadron’s youth team of Jed Cruickshank, Aiden Mansley, Brooke Wilson and Emily Keg produced the first win, levelling the score with the Taswegians who were able to cast aside their first result and come back with a vengeance in race two.

“We had a nice start for the second race and it was super straight forward after that,” King said. He is keen to do more events with the same teammates: “I really love sailing with these guys; they are amazing and I was lucky to get them – they were in hot demand.”

RYCT has qualified for the Sailing Champions League: World Final in Porto Cervo in October and King promises they will take on the European might. “If we are allowed to travel, we’ll be at the final.”

The RSYS collected trophies for top youth team (U22) and second overall. “We are very happy; that’s what we came here to do,” Cruickshank said. “We gave the RYCT a good run for their money. It’s been so much fun; I really don’t want to sail with anyone else… I’ve been spoilt!”

This season organisers mandated 50/50 male and female crew and the decision has the support of competitors. Mick Babbage from the Newcastle Cruising Yacht Club team that finished third overall said at the dockside presentation, “It’s a great dynamic having mixed crews.”

Principal Race Officer Ian Humphries was happy to share his last thoughts: “It’s been a fantastic three-day event and the RYCT’s last run down to the finish under kite with the rooster tail out the back was one of the most spectacular sailing sights you’ll see anywhere in the world.”

The SCL: Asia Pacific Final linked up with NCYC’s SailFest regatta for the first time and given the success of the joint venture, the venue will be strongly considered for the 2021-2022 season when league directors hope teams from New Zealand, New Caledonia and Asia will send their best club teams to fleet race against the Aussies.