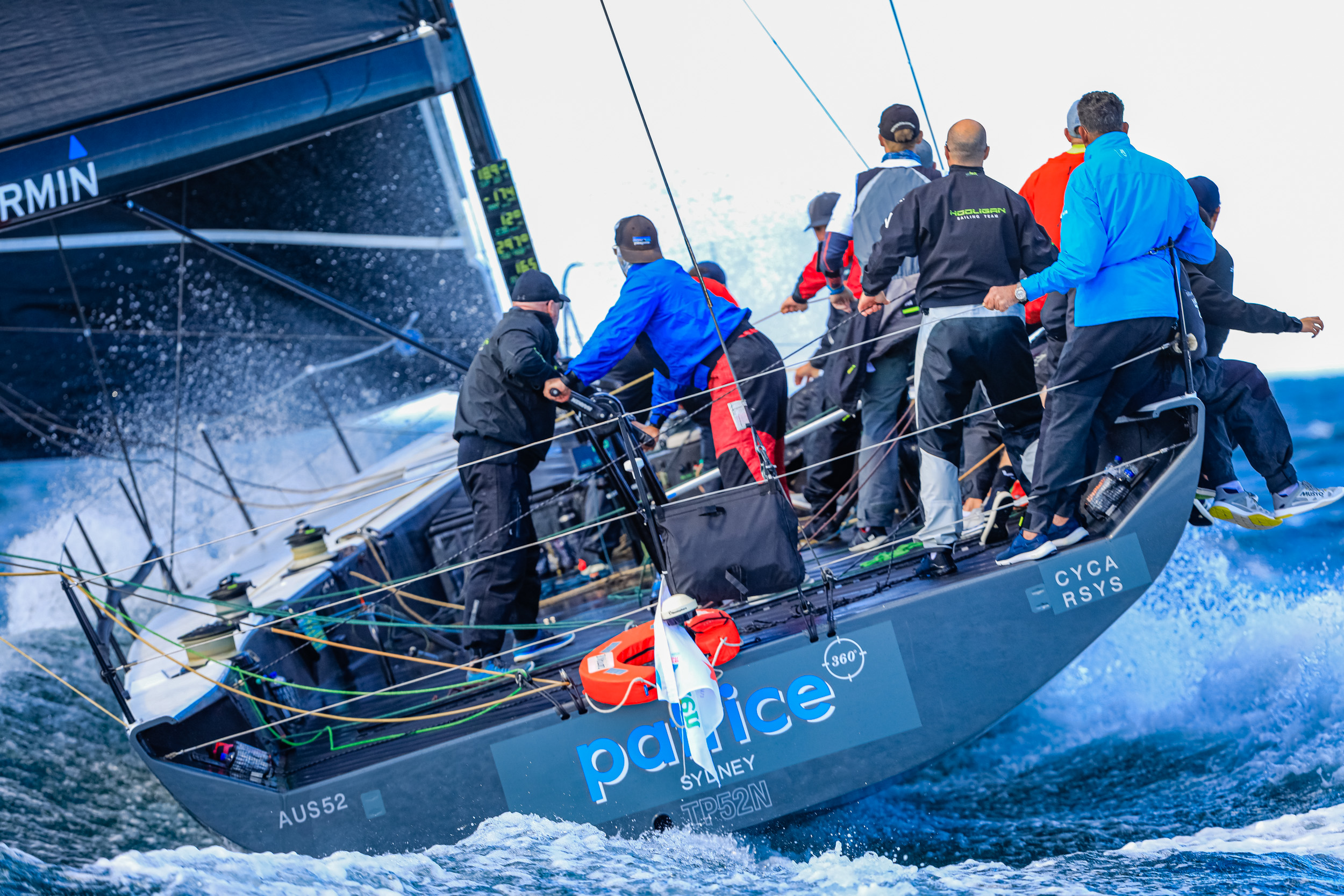 Newcastle Harbour has hosted sailing regattas for over 175 years, but never has it witnessed a sight more exciting or nail-biting than this – eight grand-prix TP52s planing across the line under spinnaker, fanned by 25 knots of wild, wild sou-westerly.

It was the perfect start to the closing day of Sailfest Newcastle 2021, especially for spectators and probably the crews – not so much for the guys writing the cheques, nor the winches that were audibly groaning under the load.

That said, the well-oiled machines and racing teams displayed remarkable control and faith as they accelerated to 20+ knots within metres of each other’s gunwales and further confined by breakwall rocks, shipping marks and the Queens Wharf pub, where punters watched in awe.

Ultimately it was Tony Kirby’s Patrice that got the jump, the black stallion holding windward advantage and galloping 150 metres ahead on the run to the port’s entrance. From there, the Botin-designed 52 stretched its legs in clear air over the 24 nautical mile passage course, beating Matt Allen’s Ichi Ban by a sufficient margin to win overall IRC honours via countback.

Tony Kirby: “We got a great start and were just able to skim past the port marker. We hit the lead then extended it. Downwind we were hitting the high 20s – they’re awesome boats in these conditions, just so fast.”

Matt Allen lamented a few lost chances for Ichi Ban but was rapt with its performance and the regatta format.

“It was one of those days when you had to execute cleanly, and we didn’t quite manage to do that,” he said. “We had a problem with a jammer at the start and got caught up in the pack. I guess we made too many mistakes overall, but we’re really pleased with how the boat’s going.

“Sailing out there in that sort of breeze is incredibly exciting. Also, everyone’s so welcoming and relaxed up here. We love coming.”

“It’s such a great event to have so many TPs here and, as far as the start goes, I’m not sure about 175 years but it was the most exciting I’ve been involved with,” owner Craig Neil said as he held his trophy aloft.

“Yesterday was tough with the shifting breezes but today really suited us – a strong breeze and a course that provided a mix of upwind, reaching and running. It had everything. Our boat was designed for offshore racing so we were really in our element.”

“That was heart-in-the-mouth stuff,” he said. “As soon as the gun went, a gust of 25 to 30 knots came through and we were absolutely flying down the harbour. We had Ichi Ban and Matador above us, and Quest and Celestial below us, so it was fairly intense but great fun.

“Once we gybed out of the harbour and worked upwind it became pretty full-on. We saw a gust of 38 knots. We had some kite issues and blew up our A4 [gennaker], then it became touch and go under our A2 in those conditions.”

Celestial withdrew with gear damage, while Denali’s owner, Damien Parkes, retired once the breeze increased: “We did the first run and clocked 25 knots, which is plenty, but it was gear-breaking stuff on the second work and we decided it wasn’t worth it for a weekend of fun,” Parkes said.

In the Offshore series run in conjunction with the Gold Cup, PHS honours went to Newcastle Cruising Yacht Club’s Summer Salt, helmed today by Peter Sinclair, ahead of Anger Management and Mako. Overnight leader Little Nico retired from the race, as did NCYC Commodore Steve Rae aboard Marta Jean.

Next year’s Sailfest Newcastle Regatta is tentatively set for March 25-27. Sponsors for 2021 included the City of Newcastle, Transport NSW, Bolle, Musto and Heineken.

The final series of this world-class match-racing series also concluded today, with the Royal Yacht Club of Tasmania being crowned Asia Pacific Champions.

The crew of Sam King, Chloe Fisher, Alice Buchanan and Charlie Zeeman finished first in the qualifying round and fittingly prevailed in the finals.