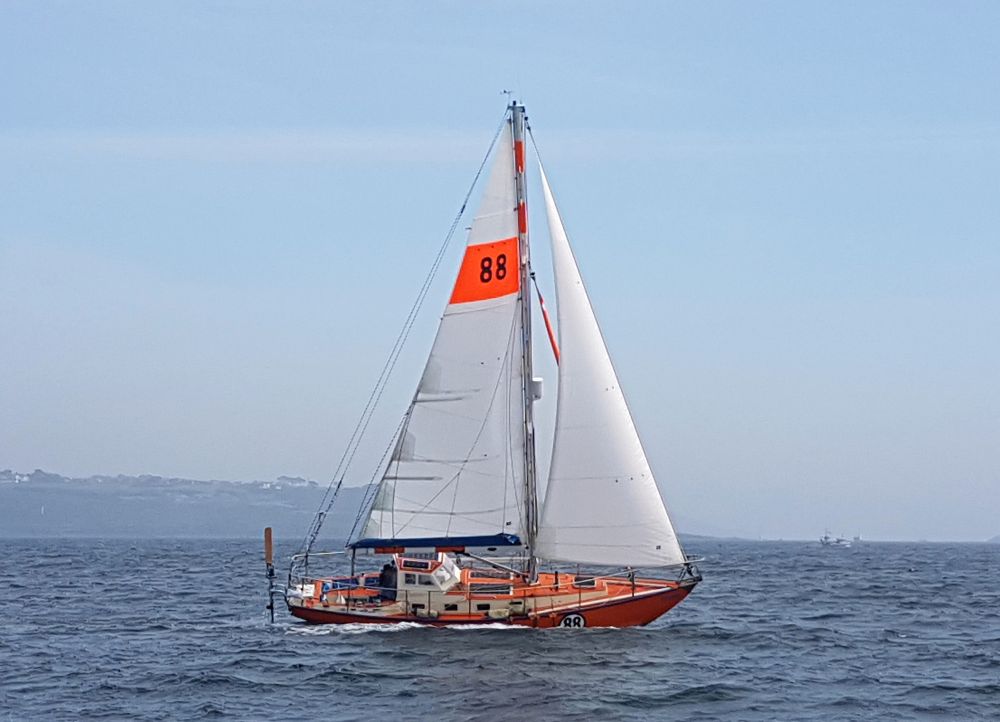 With less than month to the start of the Golden Globe Race from Les Sables d’Olonne on July 1st, skippers are working feverishly to complete their preparations ready to take part in the Suhaili 50 Falmouth Parade of Sail celebrations between 11-14th June to mark the 50th anniversary of Sir Robin Knox-Johnston’s departure from the port to start the original GGR back in 1968.

Sadly, Cornish-born solo circumnavigator Robin Davie has been forced by lack of preparation time to postpone his entry until the next Golden Globe Race in 2022. “We were just running out of time and two weeks ago, I had a ‘come to Jesus’ discussion and concluded that there was little time left for proper preparation of the boat, and even less time for race prep.” Admits Davie. “I remembered how I truly struggled to get to the start line of the 1998 BOC solo round the world race and I did not want my GGR effort to be a repeat.  Stress levels have been rising rapidly, and it is time to say ‘enough is enough’ and to focus towards 2022 ­– wealth and health permitting.”

Don McIntyre says:  “This is very sad. Robin has put his all into preparing for this race working 18-20 hour days to get his boat restored and in good shape for circling the globe. He is hugely experienced and very practical, and it is a measure of the man that he has taken stock of the situation rather than press on in blind faith and run the strong risk of failure. We are all sorry that he will not be on the start line this year, but applaud his decision and will welcome him to join us for the 2022 Golden Globe Race.”

All other bows are now headed towards the Cornish Riviera port with the exception of Francesco Cappelletti’s Italian yacht 007. Delayed by last minute hitches to final preparations, he has been given special dispensation to ship his Endurance 35 overland directly to Les Sables d’Olonne while he flies in to Falmouth for the compulsory skipper’s safety conference on 12th June.  There is also a question mark over which way Nabil Amra’s campaign is going. The Palestinian entrant has to complete his 1,000 mile solo qualifier before the skipper conference, and though he is allowed to use his engine, by yesterday his satellite tracker showed he had covered little more than 125 miles in two days and lay stalled all night.

Better news from Finland’s Tapio Lehtinen.  His Gaia 36 Asteria was off-loaded from a ship in Zeebrugge on 3rd June and two riggers have arrived to step the mast and sail with Tapio directly to Falmouth. He expected to set sail on the 340 mile leg to Falmouth on June 6 in some sort of company with Mark Slats (Ohpen Maverick) and Indian competitor Abhilash Tomy who has been preparing his Suhaili replica Thuriya in Holland

First to tie up at Falmouth Haven Marina, is Britain’s Ertan Beskardes Rustler 36 Lazy Otter. He arrived in port last week at the completion of his 2,500 voyage from Fertilia Marina in Sardinia

Mark Sinclair (Aus) now has his Lello 34 Coconut sailing out of Plymouth Haven Marina where he has based his preparations, while fellow Australian Kevin Farebrother, who chose Les Sables d’Olonne as his base, plans to set sail for Falmouth on June 6, possibly in company with French rivals Antoine Cousot (Métier Intérim) Jean-Luc Van Den Heede (Matmut), Loïc Lepage (Laaland) andPhilippe Péché (PRB)