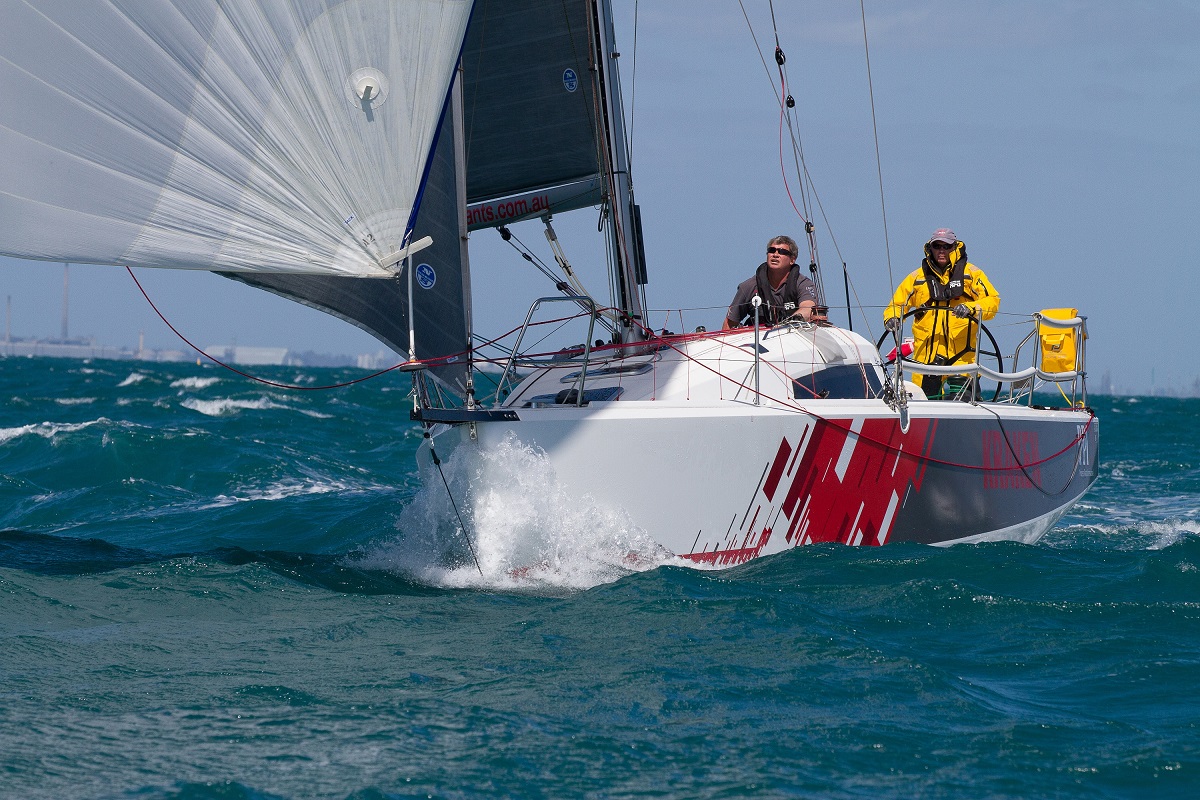 As preparations for the upcoming Sundance Marine Melbourne Osaka Cup 2018 get into full swing, up to 11 crews will practice their double-handed skills when they take part in the Ocean Racing Club of Victoria’s (ORCV) Melbourne to Hobart (Westcoaster) Yacht Race starting Wednesday 27 December – and some are battling the clock to make the start.

The 440 nautical mile race is a testing final offshore shakedown, taking the yachts from the start off Portsea Pier (also the starting point for the Melbourne Osaka Cup) out of Port Phillip, across notorious Bass Strait, down the west coast of Tasmania, passing Sandy Cape, Point, Low Rocky Point and South West and South East Capes at the southern tip, before sailing around Bruny Island to the finish in Hobart.

Among those heading to Hobart are sister and brother, Annette and Andrew Hesselmans (Red Jacket) and friends Todd Giraudo/David White (Kraken).

Annette Hesselmans is a remote nurse currently working in the Northern Territory while others work on Red Jacket at Hobsons Bay Yacht Club. She admits getting ready to start the Melbourne to Hobart is a little daunting.

“It’s a challenge trying to help from interstate. My husband, brother (who lives in Victoria) and others are helping out. I’m trying to do as much as much as I can – I will be down next Tuesday for a week and hope we can get ready to do our qualifier then,” she says.

Their Radford 12.2 metre is currently undergoing the works: “The boat’s been out of the water since late September – we’ve just put new mast in – it still has to be tuned. We’re installing a new electrical system, new exhaust in the engine and new water tanks are in process of being installed.”

Of the bigger picture in March, she says: “I’m really excited, but it’s been stressful trying to get boat ready. I can’t wait to get underway – I’m also looking forward to cruising back – it’s still quite surreal. Neither of us has been to Japan before, so that’s also exciting.”

Hesselmans has done little racing in recent years, but cruised 1500 miles from Vanuatu to Australia, “which I think gives me a good idea. I did that two-handed, and it was an idyllic passage. I was enjoying it so much, I was sorry it came to an end, as we were in rhythm.”

On racing with her brother: “We have spent a little time racing together and it was always mutually respectful. He’s older so it does present its challenges at times, but we always seem to resolve differences.”

Todd Giraudo’s Kraken was the first Jeanneau Sunfast 3600 off the production line. Officially launched at the 2014 Sydney International Boat Show, the West Australian yachtsman took delivery then sailed her home to Fremantle where he regularly sails two-up.

“This is our first go at the Melbourne Osaka,” he says of his and regular sailing partner David ‘Dubbo’ White’s race entry. “Time money and opportunity is how we got here.

“We want to do it for many reasons – it’s the longest offshore race to start in Australia. It’s a bloody long way. I’m looking forward to finally getting to the start – it is more than a relief, when you think of all the preparation,” Giraudo says.

“Dubbo and I were the first out of WA to do all the blue water races double-handed. We get on really well. We split the chores fairly evenly. All the fun stuff like admin and catering falls to me, Dubbo is a sailmaker, so he does that.

“There are three Jeanneaus in the Melbourne Osaka – we can judge performance from each other. The Edge (a Jeanneau Sunfast 320 entered by fellow West Australians David Kenny/Paul Schulz) is my former boat, so I know how it goes,” Giraudo ends.

Melbourne Osaka committee chair, Martin Vaughan, is also taking part in the race two-up aboard the comfortable Beneteau 45f5 Magique with Maurice Contessi.  This will give Vaughan a taste of what lies ahead for competitors and a preview of who may have the edge for the longer race ahead.

In other news, entrants continue to arrive and berth at Sandringham Yacht Club, co- host of the Melbourne Osaka Cup with the ORCV and Japan’s Hokko Yacht Club. Japanese entry, Bartolome, a Dehler 38 crewed by Keiichirou Morimura and Masakazu Omote, departed Osaka for Melbourne last weekend.

To start off Portsea Pier, the race has a starting window starting 18 March 2018, with the main start on Sunday, 25 March and a third start for the faster boats on 1 April. Entries represent Victoria, Western Australia, South Australia, Queensland, NSW, Tasmania, Hong Kong and Japan.