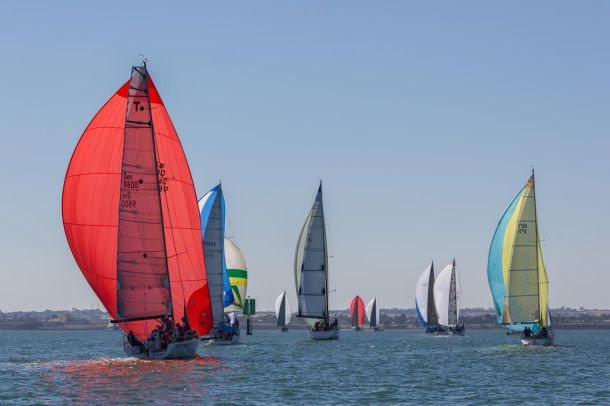 The Festival of Sails’ main act begins this Friday when the spectacular 9.30am start of the Melbourne to Geelong passage race off Williamstown for most of the 260 plus boat fleet marks the traditional opening of the Southern Hemisphere’s largest annual sailing regatta.

Entries close at midnight tonight, Tuesday January 20, 2015. The host, Royal Geelong Yacht Club in partnership with the Victorian State Government, the City of Greater Geelong and associated supporters are delighted to have the opportunity to welcome another wide-ranging fleet from Victoria, Queensland, New South Wales, South Australia, Western Australia and Tasmania in a few days’ time.

Sports boats open the calendar of events this Thursday on the main arena, Corio Bay. The three-day contest for the bulk of entries nominated for the cruising division and its derivatives begin with the shortened passage race and end on Sunday January 25, giving those crews the Monday free to enjoy Geelong city’s Australia Day shoreside and on-water entertainment program.

The Rating Series, Performance Racing and One Design divisions are running a four-day program that wraps up on Australia Day, January 26th.

Principal Race Officer Denis Thompson is onsite at the RGYC this week overseeing the Australian Multihull Championship which dovetails into the main event. He says everything is organised and the club and its large-scale team of volunteers are ready for the huge influx of sailors plus their families and friends.

“It’s terrific to see the sports boats division on the build and the reliable turn-out of Sydney 38s for their one design competition,” says Thompson. “Plenty of gun boats are entered in the Rating Series so there’s the usual grand prix professionally-crewed line up. Ever-increasing is the turn out from the cruising fleets with big numbers in the Cruiser Racer division and over 80 in the Cruising with Spinnaker.”

Chairman of the RGYC’s organising committee Paul Smart says the club is proud to have the quality of sponsors who have signed up this year, including Major Sponsor Rex Gorell Land Rover, who are setting up an exciting experience with the Land Rover Terrapod onsite over the weekend.

In addition, the event has been buoyed by confirmation that Sir James Hardy will be joining in the festivities at the event.

“We are honoured by the attendance of Sir James Hardy and his son William,” said Smart.

Let’s take a look at some of the fleet highlights from the entry list.

Rating Series
Incorporating the Victorian IRC and AMS Championships, this is where the latest lightweight and most slippery ply their trade. Expect a four-day ding-dong between Rob Hanna’s local favourite, the TP52 Shogun just back from the Pittwater to Coffs Race, and Ray Roberts’ OneSails Racing, Michael Hiatt’s former Living Doll.

Other easily recognised names in the 45-55 foot size bracket include Bob Cox’s vintage DK46 Nine Dragons sailing for Middle Harbour Yacht Club and the current Audi IRC Australian class B champion. Humble in their predictions of a final result a boat spokesperson says, “We have no great expectations in Geelong. We know the competition will be strong, particularly with the benefit of local knowledge. We will do our best, but most importantly we will have a great time!”  Nine Dragons will square off against a second DK46, the local Extasea, and Nicholas Bartels’ Cookson 50 Terra Firma.

Defending division 3 winner, David Ellis’ Penfold Audi Sport is absent from the starter’s list – Ellis is downsizing to a Shaw 650 this time around and mixing it up in the racy sports division – and based on past form Thompson expects one of the Adams 10s to step back into the winner’s circle.

Coming all the way from Western Australian to contest its first Festival of Sails is the Runnalls 39 called Jaffa based in Fremantle.

Cruiser Racer and Cruising
It’s an all-Victorian roll call in both divisions, which add up to half the total fleet. Beneteaus, Archambaults, more Adams 10s, sports boats, X Yachts and Bavarias dominate these divisions where the starts and first mark roundings provide plenty of fodder and quirky language for the photographers.
Sports boats

Sydney 38s
Ten Sydney 38s, nine Victorian and one from South Australia, will do battle from Friday to Monday’s Australia Day public holiday. Many of those are using the Festival as the final grease up for the class’ national title next month, February 20-22, 2015, at the RPAYC in Sydney.

Multihulls
Coming straight off their Australian championship also organised by RGYC, the multihulls will be finely tuned by the time the rest of the Festival fleet arrives.