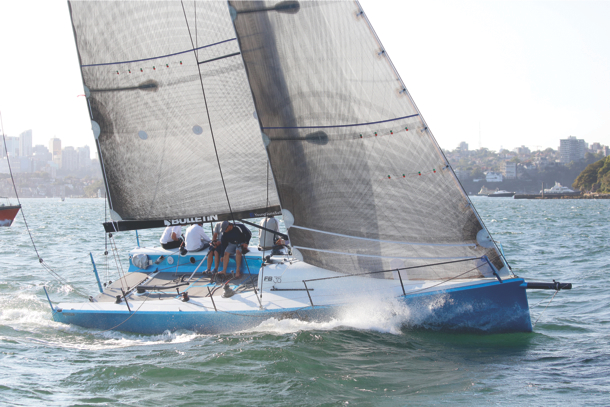 Young Guns out for a spin on Sydney Harbour. Photo Michael Chittenden.

Screaming downwind under an enormous logo emblazoned spinnaker on an Australian 35 foot sport yacht on an empty Sydney Harbour is a rare privilege. This has got to be the marine equivalent of driving a Porsche 911 GT3 on the famous Nurburgring. Indeed, the comparisons between the Van Munster Boats FB35 and exclusive sports cars are many. From the bright electric blue paint job to the impressively large cockpit, deep keel and tall rig, this yacht is all about performance and looking good!

The FB35 is a 35 foot, offshore racing, sport yacht built by Brett Van Munster and his team at Van Munster Boats in Morrissett, NSW. Designed by Fred Barrett from Hobart, the brief was to produce a fast, fun offshore yacht with capability for offshore and overnight outings. The client for this first FB35 is an experienced New Zealand sailor with two young sons who are mad keen sailors and top performing racers in their chosen dinghy classes, hence the name Young Guns!

Sighting the boat from afar this sunny Saturday at Rozelle Bay, it’s the distinctive paint job that strikes you first. The electric blue metallic carries into the large cockpit which is also covered in large panels of highly grippy non-skid material. Stepping onto the deck of the FB35, the layout will be familiar to anyone who has sailed on TP52s or other high performance yachts lately. The primary winches and sail controls are all centred around the forward end of the cockpit, while the mainsheet runs forward from the traveller aft of the rudder stock to the winches forward of the steering position. For the helmsman, a Spinlock tiller extension connects to a beautifully finished carbon tiller.

Heading under the Anzac Bridge to our sailing area (racetrack?) for this test, Brett Van Munster excitedly espouses the virtues of the pre-preg carbon fibre and nomex-cored hull and deck. He explains that “we wouldn’t consider any method other than pre-preg for building our skiffs so it really does not make much sense to use an inferior construction process on larger structures”. The high-tech build method results in a 3,000kg displacement, with 1,600kg deployed from a carbon fin with an overall draft of 2.65m. Couple this “chassis” with the “engine” consisting of an NZ Rigging two spreader, twin backstay rig setting a de rigueur square top main, non-overlapping jib, and an enormous spinnaker (let’s talk about that later!), and I reckon calling this yacht a Maserati or Aston Martin on water would not be an exaggeration.

With a crew of seven mustered for this test we are just about on the money where personnel is concerned. Two crew tend to the runners, the main trimmer sits forward of the helmsman and three crew man the foredeck, and jib and spinnaker trimming, leaving plenty of room for non-sailing friends to come along for the ride. Hoisting the Norths square top mainsail on the 2:1 halyard emerging from the companionway is easy with assistance from the primary winch. Once the jib is quickly hanked onto the forestay, we are ready to sail.

After watching the start and first lap of race one of the 2016 JJ Giltinan 18ft Skiff Championship in a 20 knot north-easterly, we set off upwind. Van Munster Boats have built the majority of the 18s fleet and with the skiffs getting rough treatment week in week out and still performing spectacularly,
it is pretty clear that Brett and his team build a durable product.

We settle into a groove doing about 7.5 knots. With the 3:1 topmast backstay cranked up the forestay is impressively straight and the structure feels really stiff. What strikes me most about our short sail on Young Guns is the ease of use of all the rig and sail controls. The jib luff tension and jib clew position can be adjusted from the windward rail with rope purchases while the mainsail trimmer responds to the gusty breeze by playing the traveller and mainsheet with ease. The helming position is highly ergonomic with solid carbon fibre foot chocks and a high quality tiller extension. There’s no argument: the FB35 is a pleasure to drive upwind, with a balanced helm, although performance potential would probably increase with a hiking crew and more time on board to play with rig settings.

Going below to grab the Norths A4 spinnaker, I quickly check out the interior. It is pretty spartan, but there is ample room for everything you could need for a short coastal race or an overnighter. Young Guns had recently competed on the 240nm Pittwater Coffs Race and is thus equipped with a small galley and four proper sea-going bunks. The rather large coach-roof increases space down below and as an added bonus protects the crew when the salty stuff is cascading across the deck at pace downwind! The bow is dominated by a retracted bowsprit which extends back to the mast but there’s still plenty of room for sail and rope storage. Under the cockpit an inboard diesel drives a standard sail drive so there’s not much room aft.

Up on deck again and it’s time to set the 186m2 A4 kite. Pulling out the enormous retractable pole is the first task; it’s seriously long! The pit is set up on the starboard side of the coachroof while the companionway is to port, primarily to allow access to the interior while the keel is raised for transportation. Of course, having the crew to windward while hoisting at the top mark is useful too! Utilising Ronstan constrictors for the tack lines and bowsprit controls and having halyard locks means there are no conventional clutches in the pit. It’s tricky getting used to initially, but it’s soon evident that while also being lighter, the setup would in the long term reduce wear on halyards and control lines. Flying downwind under the big chute, all the crew bar the spinnaker trimmer are stacked at the transom. The 18ft skiff camera crew have come to take photos of us and they’re enjoying seeing the Guns screaming downwind in a ball of spray! The boat planes nicely with her bow up, and we have plenty of control from the large rudder and righting moment gained by the wide stern. Downwind in this sort of breeze the FB35 feels like a big skiff, albeit with substantially more power and no time for the helm or trimmer to get complacent.

After a messy kite drop and another hectic, fast lap of the harbour, the light is fading and it’s time to head back in. That’s when the FB35 showcases yet another spectacular feature: a gargantuan ice box smack in the middle of the cockpit from which cold, wet beers are extracted. Chatting with the crew about this rocket-ship of a boat on the way in, it is clear that the FB35 has delivered on its “fast and fun” brief. There is no doubt that the FB35 is an impressive template for yachts of varying capabilities, and just as this model is set up for PHS racing, the next FB35 will be oriented towards IRC racing. I for one can’t wait to see more of these proudly Australian designed and built yachts on the water. ✵

NOTE: To keep up to date with all things Young Guns head to younggunsailing.com and for more information on the FB35 contact Brett at brett@vanmunsterboats.com.