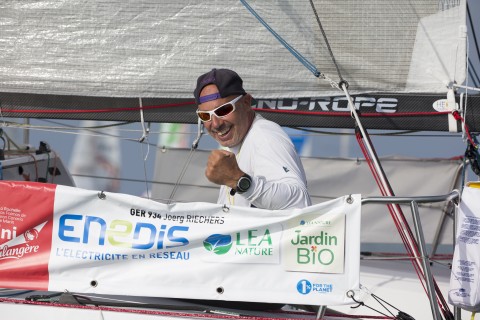 Jorg Riechers is a favourite for the Mini Transat. Photo © Christophe Breschi .

Forecasts are made to be challenged… or not. Nevertheless, just days before the start of the Mini-Transat La Boulangère, the feelings voiced in an informal survey of the fleet give us an initial picture of the opposing armies, be they actual or perceived. Though the rankings for the pre-season have some bearing, other criteria are also put forward to justify the different choices.

“Favourites, I have so many… It’s impossible to isolate a top three, particularly among the production boats. How do you choose?” It’s a recurring theme among the competitors, who are just completing the last little jobs a few days before the start. It is a judgement to be qualified however, given how clear the hierarchy looks in the prototype category, where Ian Lipinski (Griffon.fr) appears to be the very firm favourite. “He’s dominated everything for the past two seasons and he has perfect control over his boat. It would almost be an injustice if he didn’t win this Mini-Transat,” says Jörg Riechers (Lilcenthal), one of the few racers likely to hold out on Ian.

Prototype, one trio and some outsiders

Though Ian Lipinski holds sway with the votes, the forecasts are a lot more open the minute discussions turn to designating the podium for this 2017 edition. There are three skippers who share the votes for the two remaining places on the podium, though certain outsiders are worth considering. Despite the fact that his boat was launched very recently, Jörg Riechers is often cited as a potential runner-up to Ian Lipinski. To his credit, the German skipper boasts a stellar hull and vast experience across the board.

Erwan Le Méné (Clôtures Rousseau) is set to round off the podium. Indeed, his tough reputation, his technological ease and the prospect of sailing on the winning boat from the 2015 edition, really work in his favour in relation to his rivals.

Finally, Simon Koster (Eight Cube) logically has a number of votes in his favour too. This will be the third participation for the Swiss sailor, following on from the Mini-Transat in 2013 and 2015. The work to simplify his prototype since the Mini-Transat 2015 has borne fruit and Simon boasts a level of consistency now that was apparently lacking on certain points of sail. All Simon’s talent, demonstrated in 2013 when he finished on the podium of the production boat category, can finally be expressed once more.

For all that, we mustn’t forget the other competitors who get a regular mention from everyone and who could well shake up this theoretical hierarchy.

Romain Bolzinger (Spicee.com) or Charlotte Méry (Optigestion – Femmes de Bretagne) may well pull off a surprise performance. Regularly at the front of the fleet in the pre-season races, they both have tried and tested boats. Finally, it would be impossible to forget Quentin Vlamynck (Arkema 3). The young skipper from France’s Nouvelle-Aquitaine region has been constantly upping his game, as evidenced by the great control he has over his innovative prototype.

Relatively simple as it may be to come up with predictions for the prototypes, the same cannot be said of the production boats. Indeed, there are those who have competed in all the pre-season races, those whose offshore experience is unquestionable and those who have really shown a burst of speed, so it’s hard to choose between them.

There are certain skippers who seem to be really on their game in terms of the trimming. Clarisse Crémer (TBS) and Erwan Le Draoulec (Emile henry) have been harvesting the fruit of the hours and hours spent training and sizing each other up under the aegis of the Lorient Grand Large training centre and its coach Tanguy Leglatin. Both skippers may be lacking a certain experience of offshore sailing however.

Always at the front of the fleet in the major offshore events, they can sometimes appear to be less at ease in some of the pre-season sprint-type races. Tom Dolan (Offshoresailing.fr) is one of the most iconic representatives from this camp, together with Tanguy Bouroullec (CERFRANCE Kerhis). The duo competed in the last edition of Les Sables – Les Açores – Les Sables, where they were really able to show what they were made of. Henri Patou (da.fr) is another cert in this category. Like Tom Dolan, he already has one Mini-Transat under his belt, which will doubtless prove very useful when it comes to tackling the second leg between the Canaries and Martinique.

These sailors have already been there and done that, switching craft and racking up experience in different classes. They are versatile and come armed with a wealth of professional experience, which will serve them well. Pierre Chedeville (Blue Orange – Fair Retail), bolstered by his experience as an officer in the merchant navy, can pride himself on an impressive number of days spent at sea. In addition to his natural talent as a trimmer and helmsman, he may be the surprise package. The same is true of Rémi Aubrun (Alternative Sailing – Constructions du Belon), who boasts experience of both Mini and Class40, is a master sailmaker in La Trinité sur Mer, south-west Brittany, and has a strong technical background to his credit, which could make the difference, even though he has only had a short amount of time sailing his Pogo 3.

In terms of working out the bookies’ favourite, the guessing game is still in full swing. However, the Mini Transat has already shown that being the favourite is in no way a guarantee of performance. An offshore race is by its very definition synonymous with a number of unknown factors, which may handicap a favourite or shine the spotlight on some lesser known figure. As the saying goes, “It ain’t over till it’s over…”