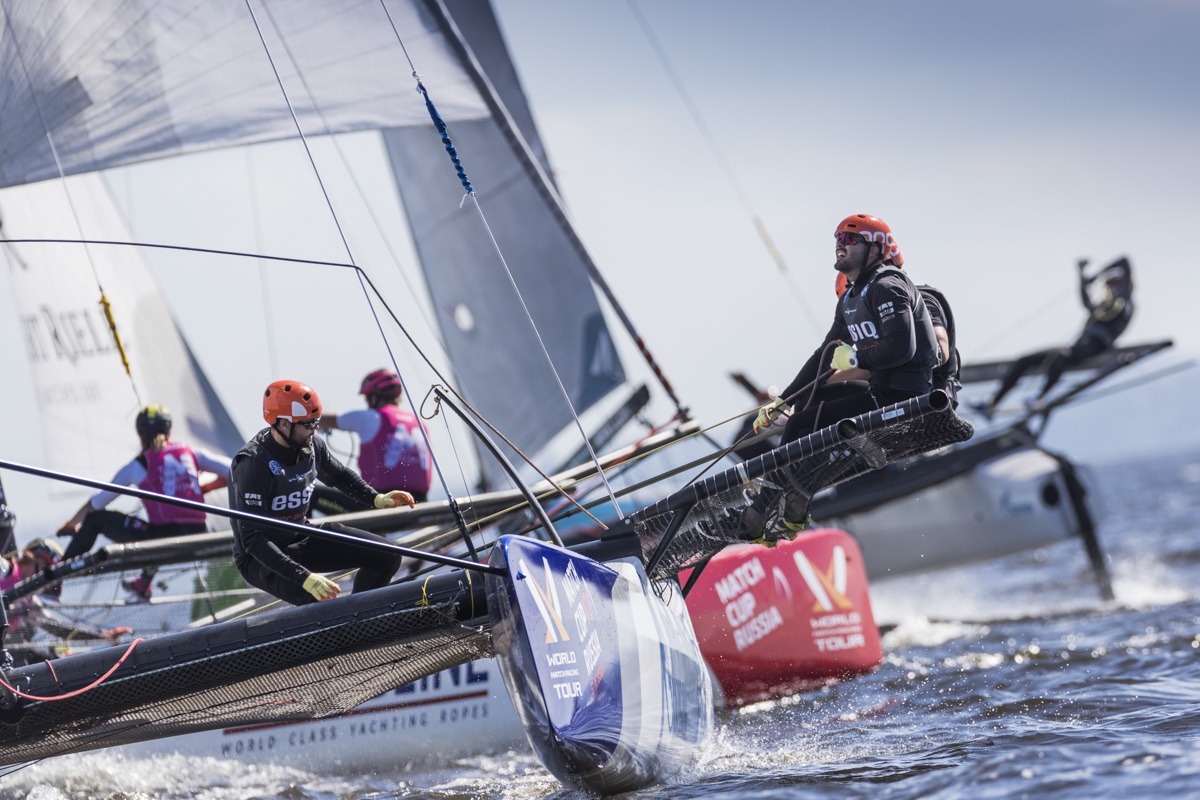 St. Petersburg, Russia (August 1, 2017) – A full first day of racing in glorious sunshine and solid westerlies at the WMRT Match Cup Russia in St Petersburg saw the big beasts making some early shows of strength as they sought the best seeding for the knockout battles to come. Phil Robertson (CHINAone Ningbo), Ian Williams (GAC Pindar) and Yann Guichard (Spindrift Racing) all topped their groups, but they did not have it all their own way.

If the draw produced a group of death, it was Group 1, where current Match Racing World Champion and this year’s clear leader, Robertson, discovered from the first race that it was not going to be all plain sailing. One of Perth’s many emerging talents, Matt Jerwood (Redline Racing), made an early impression by winning the first race after a three-horse race with Robertson and Pieter-Jan Postma (Sailing Team NL). “Our tactician kept putting us in the right place and we just snuck around Phil at the final mark,” Jerwood said. “As frustrating as it is drawing the number one seed in your group, it always toughens you up for the coming regatta. It’s always fun racing Phil because he and his boys are so good, you’re racing the best in the world when you race Phil.”

He is not wrong, Robertson remains the man to beat. The New Zealand skipper won stage one of the WMRT, Match Cup Australia, and was generally unbeatable in July. He followed a crushing victory in the GKSS Match Cup Sweden at the beginning of the month, by winning the inaugural M32 World Championship in Marstrand, Sweden, and then won the Extreme Sailing Series event in Barcelona in the third week.
Jerwood, currently fifth overall on the WMRT leaderboard thanks to finishing second at WMRT Match Cup Australia in March, where he lost 3-0 to Robertson, finished the day second in the pool after fluffing the start in race two and watching Robertson, score two bullets. But Jerwood roared off the start in the last race to make sure no one will fancy facing him when the knockout rounds start. He also did enough to perhaps elicit a small shot across the bows from Robertson.

“Matt had a pretty good day, I think he had a little wobble there, race two,” Robertson said, “but they’re a fast team and always going pretty nicely, and if they can get a clean start they’re definitely a bit of a threat.”

The fleet was more bunched in Group One, which probably reflected the depth of quality of the teams as much as the slightly shiftier breeze. In the early part of the day it averaged 12 knots, but dropped to 8 sometimes in the middle races and gusted to 14 at points. It was more stable, if slightly weaker later. The group stages are taking place at St Petersburg Yacht Club, in the slightly more offshore conditions of Neva Bay, before the knockout stages move into the city on the Neva River.

But for everyone it was a day when, as so often in fleet racing, the start was decisive. “It was very much a starting day, if you get ahead you get to stay ahead,” Robertson said. That was never clearer than in Group 3’s first race when Spindrift Racing were one of three boats that were OCS at the start and Steve Thomas (RPM Racing) won in his team’s first outing since Match Cup Australia in Perth. Guichard and Spindrift, with Sam Goodchild back on board after injury, did not give the others a sniff after that, reeling off three bullets in a row. “After that we made three really good starts in a row and when you’re not in the pack, it’s not tricky to control the other ones,”Guichard said.

In these early stages a good guide to form is how boats cope with bad starts, and on that score all the leaders showed their speed and consistency. Spindrift came from the back to finish second in the first race and GAC Pindar also gained ground to finish second twice, to go with their two bullets, won from the front.

In the first race in Group 2, GAC Pindar had a penalty re-start, went around the bottom mark in fourth but still managed to ease past in to second. “It’s a very short course, the races were not much more than 10 minutes, so there’s not much time to pull back if you have a bad start,”Ian Williams, the six-times Match Racing World Champion, said.