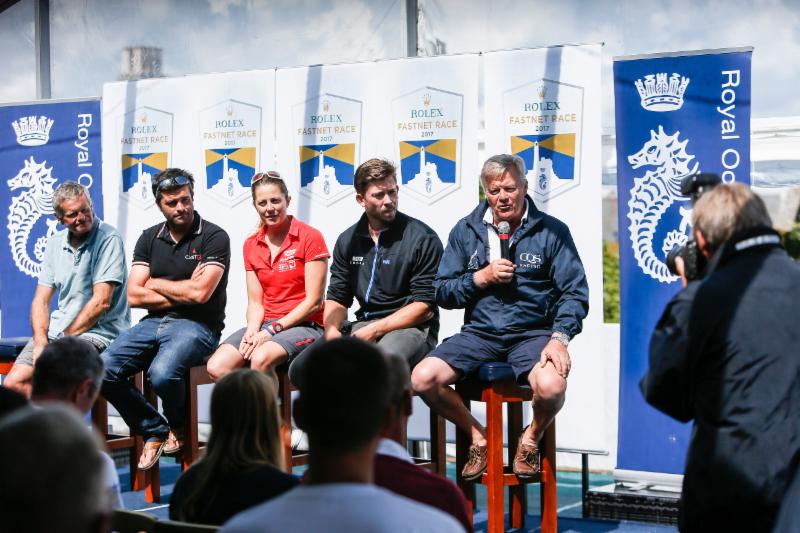 The eve of the Rolex Fastnet Race is a nervous time for the 2,700 sailors about to embark on this 605-mile offshore classic – for all gathered in Cowes on the Isle of Wight, a few are out to win one of the most coveted trophies in ocean racing, the Fastnet Challenge Cup.

For most of the crews on the 368 participating boats from 29 nations though, it will be sufficient to make it safely to the finish in Plymouth a few days from now.

Seventeen-year-old Montel Fagan-Jordan is about to compete in his first ever Fastnet just four years after taking up the sport. For a student from Greig City Academy, an inner-city state school from Hornsey in London, sailing does not usually feature on the radar of possible sporting pursuits.

Fagan-Jordan is one of seven students from Greig City who have just taken their A Levels and are now about to undergo a much tougher exam out in the English Channel and the Celtic Sea. Montel has the added responsibility of being the crew captain and helmsman on board Scaramouche, a Frers 45 that once represented the USA in the 1983 Admiral's Cup.

“Sailing is something different to what I'd normally do when you're thinking about what sports you do in London, which is landlocked,” said Fagan-Jordan, adding his friends at college don't completely understand what he does on the water or why. “Some are quite wary, some are quite supportive. But I love the different experiences you can get from going sailing.”

At the other end of the scale of experience and ambition are the professionally-crewed Grand Prix race boats including a healthy entry in the IMOCA 60 fleet. Vendée Globe and Volvo Ocean Race veteran Sam Davies sits in the driving seat of Tanguy de Lamotte's foil-assisted design, Initiatives Coeur.

Despite all her many thousands of ocean racing miles, Davies can remember the inspiration of the Fastnet Race when she was a young girl going sailing for the first time.

“I was convinced I would never sail as far as the Fastnet Rock, so being here brings back memories of being a young kid thinking, 'those people are so crazy doing that race but it's so cool.'

This time Davies' hope is to actually set eyes on the iconic Fastnet Rock and the welcome sight of that lighthouse that says it's time to turn home for the finish in Plymouth. “The Fastnet Rock is beautiful if you can see it and it's not raining,” she said. “Fortunately the forecast looks like we'll be going round during daylight hours this year.”

Among the favourites for crossing the finish line first are George David's canting-keeled Rambler 88 from the USA and the Australian super maxi CQS skippered by Ludde Ingvall.

The Finnish round-the-world veteran skipper did the double in the 1995 Fastnet Race with Nicorette, taking both Line Honours, by a 24-hour margin, and also winning the Fastnet Challenge Trophy for best time under IRC. With this year's forecast of westerly breezes suggesting it could be a long slog upwind all the way to the Fastnet Rock, the smart money is on 2017 being a good year for the big boats. Could Ingvall do the double again?

Ingvall is well versed in the quirks and unique challenges of the Rolex Fastnet Race, and says that his anchor was a key weapon in his 1995 victory.

“When the tide was against us, we threw our anchor at the right time and we stopped for our lunch while our opposition disappeared backwards.” CQS is a Swiss army penknife of high-tech ideas all merged into one boat, says Ingvall.

“I'm getting on a bit, I'm in my sixties, so I thought I'd better hurry up and throw all my ideas into one boat and see how it works,” he quipped. In addition to some cutting-edge technology, Ingvall is also racing alongside some top-notch sailing talent such as former America's Cup skipper Chris Dickson.

Other previous winners include Géry Trentesaux, racing this year on Guyader Gastronomie – a TS42 multihull. Competing in his 14th race and the winner two years ago aboard his JPK 10.80, Courrier du Leon, this year will be special as it marks the 40th anniversary of Trentesaux's first ever Fastnet race.

It was another French crew that won the race prior to that in 2013, when Pascal & Alexis Loison made history by becoming the very first two handed entry to win the coveted Fastnet Challenge Cup. Perhaps because of their success, this year has seen a notable rise in two-handed entries. “There are few things so important or as fun for a father and son to do together as doing a race like this,” said Pascal, a Cherbourg-based surgeon who taught Alexis to sail when he was very young.

Pascal summed up the unique appeal of the Fastnet: “The course is fantastic, marvellous. You have several headlands, and at each headland you have a new battle. Other offshore races are more direct, less complicated. They are not the same battle as you find on the Fastnet course.”

Commodore of RORC, Michael Boyd is taking part in his eighth Fastnet Race, sailing with Nick Jones aboard the First 44.7, Lisa.

The CEO of RORC and accomplished professional racer Eddie Warden Owen will be watching the race unfold from ashore at race HQ. “I don't think it's hard to understand why this race is so popular. It's the Everest of yachting.

It's on the bucket list, it's a race that demands to be done. Yes, we talk a lot about the winners, but for most of the sailors it's about getting to the Rock and back. Most of us live cosseted lives and the Rolex Fastnet Race is an opportunity for adventure.”

The first warning signal is at 10.50 BST on Sunday 6 August as the fleet sets out in separate divisions from the Royal Yacht Squadron start line in Cowes.

The 47th edition of the Rolex Fastnet Race starts on Sunday 6 August. A record fleet of around 375 boats representing 29 different countries will take the start from the Royal Yacht Squadron line in the race organised by the Royal Ocean Racing Club. Follow all the action and don't miss out on updates throughout the race. Here's a quick guide.