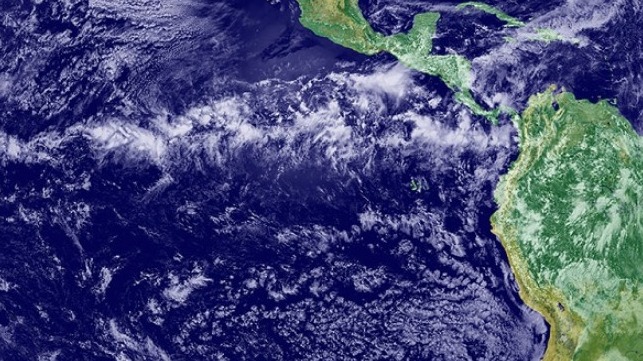 The “doldrums” is a popular nautical term that refers to the belt around the Earth near the equator where sailing ships sometimes get stuck on windless waters.

Known to sailors around the world, the Inter-Tropical Convergence Zone, (ITCZ, pronounced and sometimes referred to as the “itch”), is a belt around the Earth extending approximately five degrees north and south of the equator. Here, the prevailing trade winds of the northern hemisphere blow to the southwest and collide with the southern hemisphere’s driving northeast trade winds.

Due to intense solar heating near the equator, the warm, moist air is forced up into the atmosphere like a hot air balloon. As the air rises, it cools, causing persistent bands of showers and storms around the Earth’s midsection. The rising air mass finally subsides in what is known as the horse latitudes, where the air moves downward toward Earth’s surface.

Because the air circulates in an upward direction, there is often little surface wind in the ITCZ. That is why the area can becalm sailing ships for weeks. And that’s why they call it the doldrums.