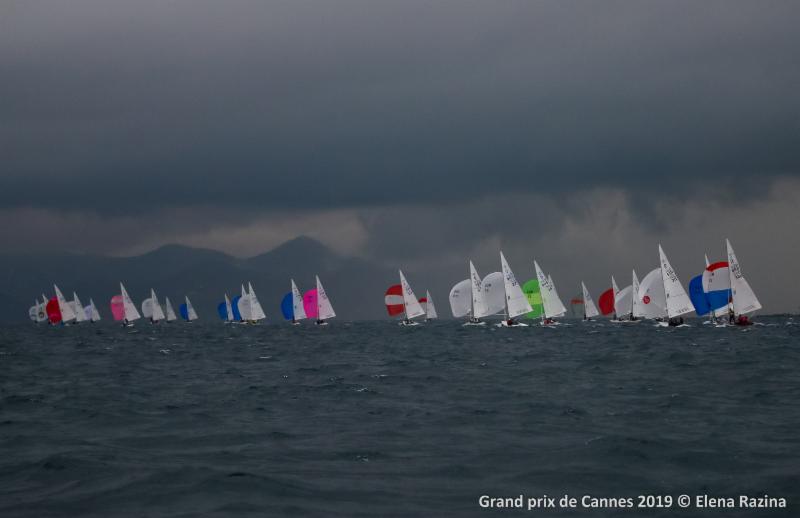 Cannes, France – 3 April 2019 – After the opening day's sunshine, the rain and squalls on day two of the Dragon Grand Prix Cannes were less than welcomed by the 51 International Dragon sailors competing in the first event of the 2019 Dragon European Cup series.

The leaden skies were initially accompanied by very light winds and the race committee was forced to postpone racing, initially ashore and then again afloat once the fleet had sailed out into the Golfe Juan race area – the easterly of the two available courses.

Attempts were made to run two races but only one could be completed, with the second being abandoned more than half way through. The winner of the completed race by a whisker was Portugal's Pedro Rebelo de Andrade, who beat Dragon stalwart Tommy Müller, a former Dragon World, European and double Gold Cup Champion by a whisker on the final leg.

Müller makes a welcome return to international competition after a couple of seasons break, sailing with a new crew of 2001 Dragon World Champion Phillip Malte and four time Olympian and three time Star European Champion Markus Koy. Müller has clearly lost none of his old touch and his second today combines with yesterday's two fourths to put him into a five point overall lead.

In second overall is fellow German Markus Brenneck, who took fifth in the race and is crewed by Olympic silver medalist Ingo Burkowski and the legendary Jochen Schumann, three time Olympic medalist and two time America's Cup winner. Britain's Grant Gordon crossed the line in seventh and ended the day in third place overall, just one point behind Brenneck, although he must have been hoping for more as he was leading the fourth race when it was abandoned.

After racing Gordon was sanguine about the situation saying “It was a good race obviously for us until it got abandoned. We had a great start and the boys were doing well. We made some good calls and were going in the right direction and the boat was going fast. But it’s been a great regatta so far, we’re still here and there are two more days to go so lots to play for.”

For 2017 Dragon European Champion Andrade and his team of top Portuguese dinghy sailors Goncalo Ribeiro and Joao Vidinha de Costa, a race win is familiar territory, but for their fourth crew member, 13 year old Kasey Marfo, it was a very special day. Marfo is part of the Scaramouche Sailing Project which uses sailing to develop the potential of pupils from the Grieg City Academy, located in the London borough of Haringey, one of the most deprived boroughs in the city. Started by geography teacher John Holt, this initiative brings sailing to young people who would never otherwise have the opportunity and it has already clearly demonstrated the amazing benefits the sport can bring to young people.

Holt and Andrade met by chance at a regatta and Andrade was so impressed with the project that he invited them to join him for regular winter training using his fleet of Dragons in Vilamoura. Kasey is one of several children who have subsequently been invited to race with Andrade and in addition Project Scaramouche has been offered the long term use of a Dragon in Cowes.

This regatta is full of world class sailor and perhaps one of the best known is also the furthest travelled competitor. Australia's Peter Gilmour is a three time World Match Racing Tour and is now helming JAP56 YRed for Yashiro Yaji as part the Yanmar Sailing Team. Yanmar are also a sponsor of the Dragon European Cup circuit and are title sponsor of the forthcoming Dragon Gold Cup in Medemblik.

After racing Gilmour spoke about Yanmar's support saying, “Yanmar is one of the world's biggest marine diesel engine manufacturers and love supporting sailing and the Dragon class. Their history extends over 100 years and the Dragon celebrates its 90th anniversary this year so there's a symbiotic relationship which is fantastic.” Of his day on the water and in particular the loss of the second race he said, “I think it was a great race and everyone was having a good time. It got a bit funky on the second run and there would have been fortunes made and fortunes lost so it was probably the right decision to abandon it, but it was difficult so far through the race not to be able to get a score.”

Looking at the day's races in detail the story opened with postponements. Eventually, at the third time of asking and under black flag, race three got underway with a clear line in light drizzle and a north easterly of around 9 knots. If anything conditions were even more difficult to read than on the opening day and it was Müller who made the smartest choices up the first beat to lead at the first weather mark by half a boat length from fellow German Stephan Link with Hungary's Ferenc Kis-Szôlgyemi in third and Andrade fourth. With the wind up and down in strength as well as shifting this leading pack battled it out but held their places for the next two legs. On the second run Andrade was to the right and timed his gybe perfectly to slip into the lead as he rounded the port gate buoy. With a shortened final beat he held his lead to the finish, Müller crossed second with Monaco's Jens Rathsack third and Kis-Szôlgyemi fourth.

The rain began to set in in earnest but the wind looked to be holding and the committee rolled into race four, hoping to complete ahead of the approaching thunderstorms. Initially things looked promising and Britain's Grant Gordon led the fleet comfortably for the first lap and a half, but on the second run things began to unravel and with boats pointing in all directions the race committee made the decision to abandon and sent the fleet back to harbour.

Back ashore and with thunder and lightning rolling across the bay, the Yacht Club de Cannes once again demonstrated why it is world renowned as one of the circuits most hospitable clubs, laying on a delicious and much needed post sailing meal and a warm and most importantly dry welcome.

The regatta continues until Friday 5 April with a total of eight races scheduled. The forecast for day three sees a welcome return of the sun with strong westerly winds.