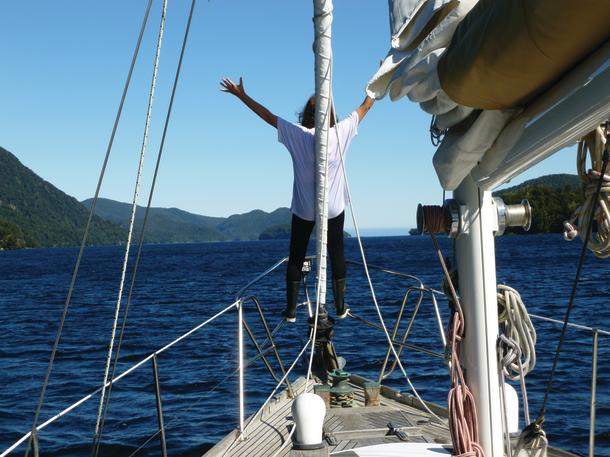 Captain Hunk was in his dolphin pose, sleeping with half his brain. “That,” he said, pointing. “At one o’clock. Four boat lengths away.” Something was floating in Whig Channel. Something pink, about half a metre long.

He roused himself and squinted at the water. “It looks like a fish.” SeaGuide continued to scoot along, leaving the object bobbing in its wake.

We gybed Sea Guide and glided back towards the floating snapper. For that is what it indeed was. And soon it would be our snapper.

When I say we gybed, I mean Capt. Hunk gybed. Not being purists, we were motorsailing into a gentle breeze. He wound in the roller furler, sheeted the main in hard and motored us around, in a semi-controlled manner, while I gaped at his competence and sat on my hands.

What little I know about handling a boat would only have added to the chaos.

I picked up our landing net, leant over the side and scooped, marvelling at the weight of the fish in the net. It pulled me over the rail, almost plunging me headfirst into the sea and baptising me like Jesus. Capt. Hunk grabbed me by the back of my shorts and flip-flopped me and the fish onto the deck.

“That was a cunning stunt,” said my man. I recovered my dignity and resisted the urge to deck him.

The snapper lay still, but freshly dead, with a chewing gum balloon blown out its mouth.

“I think someone must’ve hooked it, then lost it,” said Capt. Hunk, “but look, its swim bladder blew up while it was being wound up. That’s why it floated to the surface.”

It pays to keep a good lookout at all times.

Once underway again, feeling smug and back on course for Woody Head, I gutted and filleted our fish and put it in the fridge. It smelt fresh and its eyes were clear, so I decided I would make raw fish salad later, once we had buried our anchor firmly in the bottom of Crab Bay.

Time slipped gently by. Capt. Hunk re-assumed his dolphin-sleeping pose, scanning ahead with one eye while I steered us through the safe water to the west of the cardinal mark on Jagged Reef.

It was a west cardinal mark with two black triangles touching like a wine glass or woman’s hourglass waist; not mine though, alas.

We owned our own boat now; all the same, at times like this on a leisurely day-hop, my thoughts often strayed to Malc and his Emily. Malc had told me that lights and flags and shapes hoisted up a vessel’s mast meant something, but do not ask him what. They are not put up purely for decorative purposes, like courtesy flags and five knots signs.

Up ahead I spied a port lateral mark and immediately thought ‘there is a little red port left in the bottle’. I concur, being only a social wine drinker myself. Happy hour on SeaGuide is a short period of relaxation: usually between early morning and late evening.

Port marks are red, shaped like a can and flash red at night. Starboard marks are green, shaped like a cone (make mine vanilla) and flash green. Going into a port, you pass port marks on your left side and keep to the right hand starboard side of the channel. Umm, unless of course you are in some United States jurisdictions.

I would never dream of saying anything judgemental about another culture, but what is it with the USA’s stubbornly entrenched ‘red right returning’ rule? The exact opposite of that practised in Europe, Africa, Australia, New Zealand, the western Pacific and most of Asia, excluding Philippines, Japan and South Korea.

Plus, what is it with their need to remake Australasian TV programs with American actors? Because American audiences, apparently, cannot cope with funny accents and … oh, while they are at it, they also add more guns and litigation and take out all the expletives, sex and dope; which leaves, well not much really.

Excuse me for raving. The point I am trying to make is that the rules of the road, which is in case you had forgotten the topic of this story, are designed to prevent collision at sea. There is plenty of distraction while keeping watch without having to fret about which buoyage system you are using.

Imagine no ambiguity. It is not hard to do, nothing to blur or befuddle and no collisions too; imagine all the people sharing the same rule.

Now where was I? That’s right: SeaGuide was sailing along placidly in a feeble breeze, under popcorn clouds. There was not much else to do but tweak the course every so often and avoid other vessels and pods of dolphin herding fish.

I made a mental check of which tack we were on. Good, we were on starboard tack, with the wind blowing onto the starboard side of our boat and the boom out the port side. In theory, this meant the yacht closing in on our left should give way to us. Except that HappyDays was also on starboard tack.

As we were upwind, to windward, of them, HappyDays had the right of way because they were sailing to leeward of us. I drew two conclusions from this. First and foremost, HappyDays is a cracking name for a boat and, secondly, had the wind shifted and flicked our boom over to the other side, we would have to give way to our right and, if their boom also flicked over to port tack but they could not determine which tack we were on, then they would have to take give-way action.

Except that they might notice that we had our motor on. In theory, the law of the sea states that power gives way to sail. In practice, might is right and steel is stronger than wood. Plus, bear in mind that not everyone knows or adheres to the rules of the road. Buoy-oh-buoy is there any red port left in that bottle?

Anyway, I altered course to starboard and went around their stern. The briefest thought of ‘The Fonz’, masquerading under the dodger as unwilling worker, flashed across my mind but was gone before I could really enjoy it.

Up ahead, the wide empty channel eased my mind with the prospect of freedom, a towering land of tree ferns and sparsely populated bays. You could go anywhere under all this untroubled air and dazzling sunlight.

In spite of the tranquillity, I felt myself quiver. As we sailed along, I thought back to the stories Malc would tell from his past, about serving on a naval frigate and his years of cruising. Modern ships, he said, are so bristling with automated systems that there are only two on the bridge: an officer and a dog. Malc reckoned that the job of the officer is to feed the dog and the dog’s job is to bite the officer if he touches anything.

He claimed that on his many solo ocean crossings, he never saw any ships. Admittedly, that is because he did not keep watch. He figured that if he was going to go down, it would have been fighting in some foreign war and, anyways, at least he would go out doing something he loved. Sometimes he wondered how he lived so long.

It is hard keeping a lookout day and night, but it is also not that hard. It’s an enforced idleness. A chance to stay awake, observe nature and contemplate the sky; on a wide screen, with no ad breaks. Perfect. When do you ever do that in the city?

How wonderful at my age to discover a whole new person, by that I mean myself. SeaGuide rocks my world. Puttering around, discovering and rediscovering a love for this great country, sparking a renewed love of life, and … a whooping great ferryboat passed us on our starboard side, not four boat lengths away. Steel sides rising like cliffs, three crew on the bridge looking in our direction, mouthing ‘boo!’

A few seconds later, the wake of the ferryboat smashed into us and rocked away all residue smugness. It is called a wake because it rocks you a-wakey-wakey.

We survived a most shocking experience, shocking and yet a useful lesson for life.

It put the wind up me to think that was almost the end of our cruise, the end of SeaGuide, the end of us. It pays to keep a good lookout behind you.

How to avoid collision at sea

Will I take my own advice? I will if you will.

Take a yacht skipper course, where, if you are like me, you will be surprised to learn that deviation is mind boggling and variation is not a menage a trois.

Even if a ship does have crew on the bridge, will they be looking in your direction? Do not rely on it. A yacht is a tiny dot on a vast canvas. A mere blink on a radar screen. Chances are they will not see you, so you had better see them.

Never tell an idiot they are an idiot. It only make them more idiotic.

Risk of collision exists if the bearing of a vessel does not change and it is coming closer; i.e. it remains at constant compass direction from you and the distance between you and it is diminishing.

If you are the give-way vessel do not speed up, tempting as that seems. Either slow down, stop or make a bold alteration to starboard to go around the stern.

If you have the right of way, maintain course and speed. If the give-way vessel does not appear to be doing anything, then you must do something. Alter course to starboard, because you have been expecting them to turn to the right and give them a short blast of five expletives. ≈