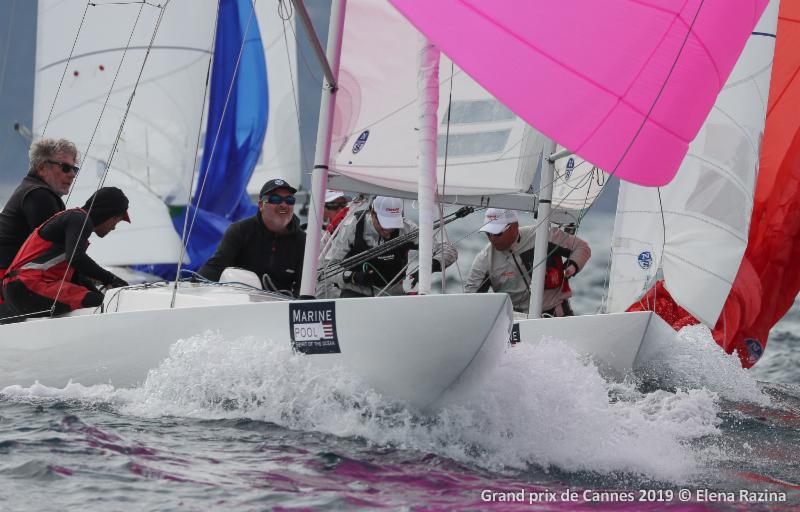 Cannes, France – 2 April 2019 – German 470 World Champion Tanja Jacobsohn showed the 50 strong fleet how it's done with some wonderfully consistent sailing at the opening day of the Dragon Grand Prix de Cannes on the Cote d'Azure, France. This first event of the Dragon European Cup 2019 has attracted an extremely strong field from 16 nations across Europe and as far afield as Japan.

Sparkling sun on the beautiful Iles de Lerins and Alpes Maritimes provided the perfect backdrop for what were to be two particularly challenging races, as shifty southerly winds varied from 3 to 13 knots and combined with tricky waves on the 1.7 mile long windward leeward courses.

The first of the day's two races went to Britain's Grant Gordon with Holland's Pieter Heerema taking race two, but it was Tanja Jacobsohn's 3, 2 scoreline which triumphed to give her a three point overall lead. Gordon came seventh in the second race to put him onto eight points overall and into second place on countback from Germany's Thomas Müller in third, who was also very consistent with a pair of fourth places. Fellow German Marcus Brennecke is in fourth place counting ten points with Heerema slotting into fifth on eleven points.

Grant Gordon's tactician Ruairidh Scott gives us a flavour of the day's conditions with his overview of race one; “We had a reasonable start down near the pin end, we got a little bit lee bowed by Pieter Heerema, he tacked and crossed us and we went a little bit further. Toward the top of the beat the wind went a bit left so we came to the top mark very close with each other and between the top five. We did a really nice job on the first run as the breeze was dropping quickly as we got close to the shore. The sea state was still very confused and the wind was very light and we did a nice job of gybing in the right places and extending away a little bit from the fleet. Only five or six boat lengths, but that was enough to give us the ability to sail where we wanted. From that point we could lead out to the right hand side where the wind filled back in from, and from that point on were were stretching out our lead. So a very good race for us.”

Behind Gordon second place in race one went to the Russian team of Yevgen Braslavets with Jacobsohn, who is crewed by husband Bernard Jacobsohn and Jan Scharffesser, third, Müller fourth and Switzerland's Hugo Stenbeck fifth. Despite his excellent start Heerema lost ground and crossed the line in tenth place.

Heerema and his crew of Lars Hendriksen and George Leonchuk are seasoned players though and went into race two determined not to make the same mistake twice. They led from the off and were never seriously challenged, Jacobsohn meanwhile had to battle the pack for her second place with fellow German Marcus Brennecke taking third and Müller his second fourth. Russians Dmitry Samokhin and Anatoly Loginov were fifth and sixth respectively, finishing just ahead of Gordon in seventh.

After racing a delighted Tanja Jacobsohn paid credit to her team saying “We had a good start and I think we were very fast. We trained a lot in the winter and I have a good crew. It was a good course too.”

Back ashore the crews enjoyed some of the Yacht Club de Cannes famous hospitality with a delicious post racing paella party. The après sailing gatherings for this year's Dragon Grand Prix Cannes have been generously sponsored by Yamaha, sponsors of the 2019 Dragon Gold Cup, which will be held in Medemblik from 9 to 14 June.

Racing continues until Friday 5 April with a total of 8 races scheduled. The sailing instructions indicate that two races will be sailed each day, but with the forecast threatening very strong winds for Thursday the Race Committee has elected to post an amendment which gives them the option to race up to three races on day two of the competition. The forecast for day two is for a lot of rain but good winds, with racing due to start at 11.30am.