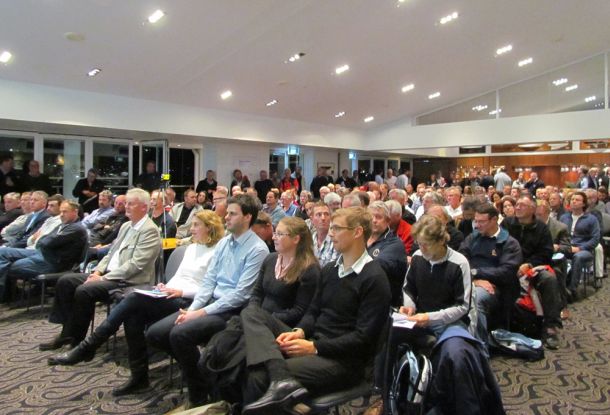 A fast and fairly comfortable race lies ahead for the 62 yachts taking part in the2015 Land Rover Sydney Gold Coast Yacht Race, according to the Bureau of Meteorology’s Michael Logan, who briefed crews at the Cruising Yacht Club of Australia last evening.

However, although predicted winds will give the yachts a nice reaching and running ride north, they are unlikely to be strong enough or long enough to allow either Perpetual Loyal or Black Jack an opportunity to eat into Wild Oats XI’s open race record of 22 hours 03 minutes 43 seconds, set in 2012.

Logan said the fleet would encounter mainly westerly winds and relatively flat seas throughout the race. For Saturday’s 1pm start, crews will enjoy 10 knots under sunny skies. The first of a handful of fronts is due on Saturday afternoon, bringing a 15-25 knot west to north-westerly inshore, with stronger winds offshore, at around 10pm that evening.

On Sunday morning at approximately 4am, the fleet will experience 10-15 knot westerlies. Around 4pm, the wind should move to the north at 10 knots. By 4am on Monday, the breeze should be back to the west at 15 knots, but will move into the south-south/west at 10 knots around 4pm.

“Our boat’s never been better suited to a race that this one. We’ve just modified the boat pretty heavily for lighter air, so the forecast is right for us,” said Mark Bradford, the skipper of Peter Harburg’s V70, Black Jack, which was designed for off the wind conditions.

On competing with Anthony Bell’s Perpetual Loyal for line honours in the 30th edition of the CYCA’s 384 nautical mile race, Bradford said: “I think the first night everyone will get a very rude awakening as to how strong that boat will be. I think the back end of the race will suit it nicely.

The main game though, is to win the race overall. Bradford thinks the forecast suits Chinese Whisper, the JV62 purchased earlier this year by Rupert Henry. “He hasn’t had the boat long, but if they sail it well, the weather is right up their alley,” he commented.

A class field means there are others in the running too. It will come down to tactics and timing, according to Ichi Ban’s navigator, Will Oxley, who is the navigation writer for Australian Sailing magazine. Matt Allen recently purchased the TP52, but will not make in back from the Transpac Race in time for the start, leaving Ichi Ban in the hands of Gordon Maguire and a gun crew.

“Great reaching conditions and plenty of breeze, although Sunday morning inshore looks light. If you decide to go offshore, you’d have to go way out, past the current,” Oxley said. “And I think that’s when the race will be decided, based on making the right decision.”

Oxley would not be drawn on which of the five TP52’s would be the one to beat. “Ichi Ban, Secret Men’s Business (Geoff Boettcher) and Celestial (Sam Haynes) all went to new owners this year, so who knows? And we have to take the Cookson 50’s (Victoire and Pretty Fly III) and the Farr 55 (OneSails Racing) into account too,” he said.

South Australian, Geoff Boettcher, agrees. “We’ve only raced locally; it will be interesting,” he said.

Boettcher’s navigator, Steve Kemp, agrees with Oxley’s summation of how the race will play out. “I’m happy with the forecast, although Sunday will be quite tricky,” he commented.

Tony Kirby, owner of Patrice, a Ker 46, said: “Coffs Harbour will be the deciding factor. Wherever you’re placed then is the place you’ll finish in. It looks like a good technical race – challenging for everyone.”

If the dice rolls the way of the smaller yachts, the likes of 2014 Rolex Sydney Hobart winner, Wild Rose (Roger Hickman), Ariel (Ron Forster and Phil Damp) and L’Altra Donna (Andy Kearnan) should come into their own. And if past performance is anything to go by, The Goat (formerly Celestial), purchased this year by Bruce Foye and Sebastian Bohm, could figure in the placings.

The race starts at 1pm on Saturday off Nielsen Park on Sydney Harbour, and finishes at Main Beach, Southport.