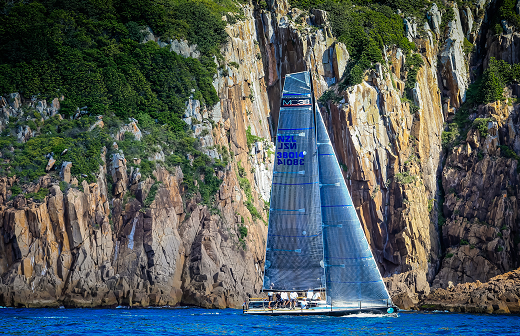 Sail Port Stephens 2016 sees the return of the MC38 class and the addition of Farr 40s to the ever-widening on-water program as the event with the handy April NSW school holiday time-slot shoots for the 200 boat mark.

It’s back to business for the Aussie Farr 40 fleet which recently hosted the class’ Rolex world championship. Though President Rod Jones isn’t able to compete at Sail Port Stephens due to other commitments, he suggests four to six Farr 40 crews are keen to consolidate lessons learnt at the worlds and are ready to hit the track again.

Depending on final numbers, the Farr 40s will either race in a division within the Port Stephens Trophy’s NSW IRC Championship or among the main fleet and be scored both under IRC and as a class.

“Sail Port Stephens is a great place and the guys going will have an excellent time,” said Jones. “Other commitments have got in the way of Kindergarten taking part but for the teams making the journey it’s a magic place for a regatta.”

Expect to see Gordon Ketelbey’s Zen, Joe de Kock’s Good Form and Rob Reynolds’ Exile plus a number of Pittwater boats lining up for the three-day series, April 15-17. Sail Port Stephens is listed on the class schedule but outside their Australian pointscore given they’ll be racing under IRC handicap rather than one design.

The high performance MC38 one design fleet last met at their national title on Pittwater in early February.  Class President John Bacon expects similar numbers to the Farr 40s for the MC38’s return to Sail Port Stephens, having sat out the 2015 regatta.

“We are excited about going back to Port Stephens and hoping for a good complement of regulars for the first round of our three part summer season championship,” Bacon said. “It will be the class’ first time travelling out of Sydney for a couple of years and we always get a great range of autumn conditions.”

Regatta director Denis Thompson says until entries close it’s too early to talk about the likely format for the two fleets. “We have the option of inshore and offshore, windward/leewards and short passage races, and a combination of both. The final schedule for the MC38s and Farr 40s will depend on the numbers and also the other fleets which may be sharing the same course area.”

Organisers are also inviting sports boats, trailable yachts and multihulls to join Sail Port Stephens as they bid to make the event inclusive of most of the active Australian fleets and appealing to all age groups.

Juniors under 18 can enter the two day off-the-beach series or race with their family as crew in the first half Commodore’s Cup or the second half Port Stephens Trophy incorporating the NSW IRC Championship. Over 18s have an enormous variety of choice when it comes to the class and style of racing that best suits.