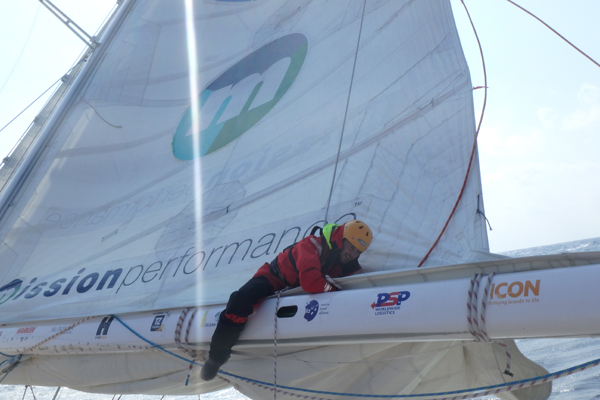 It has been another 24 hours of challenging seas and strong winds with the worst sea state of the entire circumnavigation reported by new race leader Garmin.

Former race leader ClipperTelemed+, which chose the northerly as opposed to the easterly route, has fallen back into third place on day 5 of The Sailing City • Qingdao Cup to China. Da Nang -Viet Nam, which took the eastern route, is now in second, and Qingdao third.

Garmin is making an impressive 10 knots with the wind having veered slightly, allowing it to squeeze more miles north before it broke past the northern tip of the island and entered the accelerated wind zone in that area.

Skipper Ash Skett described the conditions his ‘tireless’ Garmin team has faced as it entered the accelerated wind zone: “This made for an extremely uncomfortable, bumpy night as we experienced some of the worse sea state conditions of the whole race so far.

“Sleep was impossible and it was a very jaded team who made their way on to deck this morning to drag down the Yankee in very high winds.

“Thankfully, the wind and sea reduced soon after this and we hoisted up a different Yankee to resume our good progress north. However I fear that we have not seen the last of horrible seas as we can expect the wind and current to work against each other again once we pull level with the coast of Taiwan,” Ash added.

Daniel Smith, Skipper of Derry~Londonderry~Doire, in fifth place, said the race to Qingdao has become a lot more tactical since the fleet has spread out.

“Tactically we chose the east route looking to take advantage of flatter sheltered waters and an easterly wind shift. Early indications show this may have been a good decision,” Daniel said.

And Bob Beggs, Skipper of Qingdao, said it had been another busy 24 hours on board for his focused crew racing to their home port.

“The wind range in the last 24 hours – 2 knots and up to 56 knots in the gusts. It keeps us on our toes and the Qingdao crew are doing an excellent job. It’s back to being sticky and hot down below and we still are going airborne in our bunks occasionally.

“With our arrival in our home port beckoning hopefully just a week away we are staying focused,” Bob added.

*All positions correct as of 0900UTC