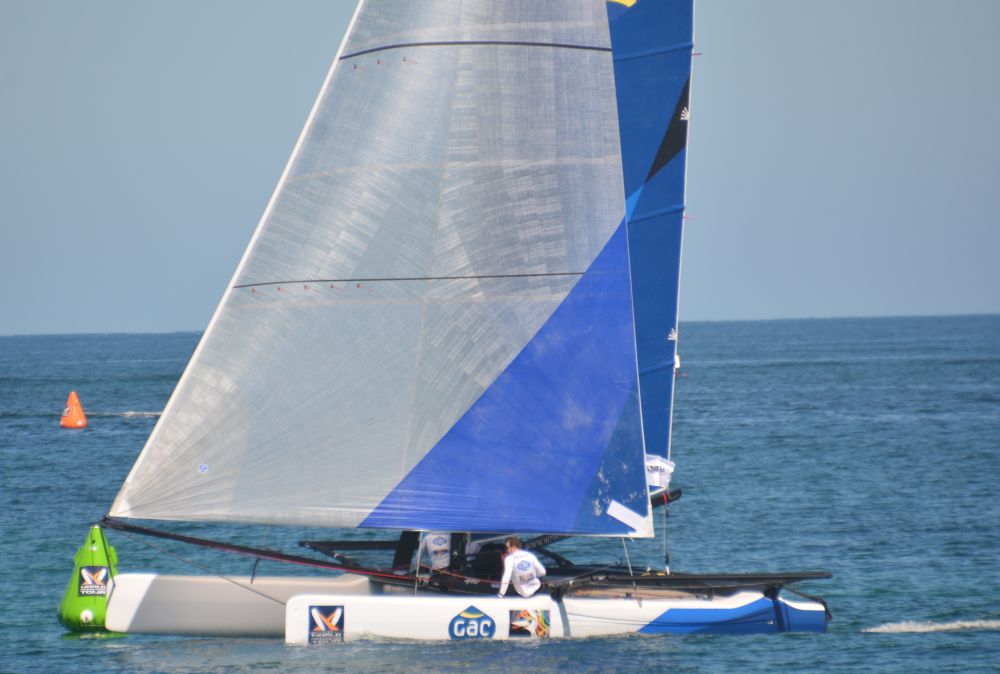 The first day of the World Match Racing Tour's historic move to M32 catamarans showed that these light and fast craft will be exciting to watch. The 20 crews were divided into four groups of five for the opening fleet racing and it didn't take long for the first group to start exciting the crowd.

Racing was delayed until just before 11am when a light sea breeze overpowered the morning south-easter at Fremantle's Bathers Beach. Although the boats could fly a hull only in the gusts in the first race, there were plenty of passing opportunities.

Seven times World Match Racing champion Ian Williams (GAC Pindar) was called OCS at the start and was consequently last around the first mark. However, as he explained in the post-race interview, that actually worked in his favour. “When you're last you have no option but to gybe away and that really worked out well for us. We went up the right-hand side and that's where we extended away.”

Back in the pack, Evan Walker from the CYCA managed to get the better of Nicolai Sehested who just pushed out local hope, Steve Thomas, for third place.

By the time the second race started, the breeze had freshened to over 10 knots and the hulls were starting to fly. But there was no change at the front as Ian Williams continued to give his younger and less experienced rivals a masterclass in cat sailing. Apart from a “whoops” moment at the first mark when a gust got under the boat and the traveller had to be dumped quickly, the GAC Pindar boat vanished, leaving an interesting battle between Steve Thomas and Nicolai Sehested behind. Thomas picked the stronger lanes well and finished a good second, but it was obvious that Williams would dominate this group.

His wry comment as they crossed the line was, “A bit less lucky and a bit more good.”

Ian's words proved prophetic as his well-honed crew again dominated in the third race, finishing the series with three bullets. By this time the wind had built and most skippers chose to go upwind without headsails. Sehested's consistency with three third places made him runner-up in pool A, while Thomas, Walker and Barkow were all tied on 11 points, each scoring a second, a fourth and a fifth.

By the time the first pool sailors had come ashore and been replaced by the second wave, the Doctor was definitely doing his rounds. A solid 15 to 20 knots was blowing from the south-west and reefs were put in the mainsails. As the day progressed the hulls flew higher and the bearaway manoeuvres became more radical, with bows digging in and only great crew work saving a pitchpole.

As expected, the two top seeds in Pool B dominated. Former champion Taylor Canfield and Swede Mattias Rahm finished tied on five points each. Rahm had two bullets and a third while Canfield had a bullet and two second placings. Third was Murray Jones from New Zealand , a point ahead of Australian Chris Steele, leaving Joachim Aschenbrenner, a qualifier from the South Of Perth Match Cup last week, in fifth position.

Jones pushed the leaders hard and managed to beat Rahm in the second race, but when he was forced to change boats after breaking a rack when he clipped a media boat, he finished last in the third. Chris Steele got up among the leaders in the final race but was badly worked over by Canfield at the bottom mark. Coming into the gate together, Steele managed to get the inside overlap, whereupon Canfield simply pushed him up into irons and bore away, leaving the young Aussie 100 metres in his wake by the time he reached the top of the course.

The third group featured Kiwi Phil Robertson, who had enjoyed success in the Extreme Series helming the Russian boat Gazprom, and Frenchman Yann Guichard whose previous big race was the round-the-world Jules Verne attempt on Spindrift 2. They were joined by Hans Wallen from Sweden and local Perth sailors Matt Jerwood and Mark Whittington.

Based on experience, the young South of Perth sailors should have been overwhelmed, but someone forgot to tell Matt Jerwood. He nailed the start on two occasions, threw the boat through tacks and gybes with reckless abandon and finished with a pair of seconds and a fourth to be runner-up in the pool behind Robertson. But for one bad tack when he had to unfurl part of the gennaker to get the boat moving, it was a faultless performance.

Robertson showed his class, always staying near the front of the fleet. Bullets in the first and last race and a third in the middle one had him on five points. But for Jann Guichard it was a very up-and-down day – he recorded a last place, then second and third to be a point behind Wallen. Whittington scored 13 points from his two fourths and a fifth.

The only Australian tour card holder, Keith Swinton, was joined by another Perth local, Sam Gilmour and fellow Australian Brett Burville in the final group. They were up against Swiss ace Eric Monnin and another Swede, Nicklass Dackhammar.

By the final race of the day the wind had eased a little and tacking was becoming slow with reefs still in the mains. To the delight of the crowd, Gilmour nailed the start and led the whole way, ending the day tied with Monnin on seven points. Dackhammer took third in the final race to be a point behind, while Burville is on 11 and Swinton brings up the rear on 12. He has a lot of work to do.

Today's placings were important in the overall qualifying. Fleet racing continues tomorrow with the same four groups of five teams. To automatically qualify for the match racing phase, teams need to finish in the top three of their group. The bottom two of each group compete in a sail-off and only the top four qualify for the final 16, meaning the bottom four drop out.

Racing is scheduled to start at 9am, but if today's conditions are repeated, the start will be delayed until the Doctor fills in. Check in tomorrow for full reports.