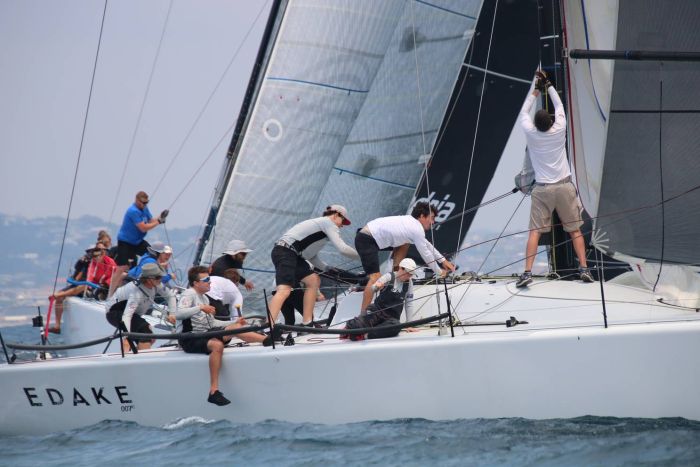 It was such a stunning day racing off Newcastle Beach even the dolphins came out to play, surfing on the bow wake of Edake leading them all the way to victory.

Farr 40 racing doesn’t get any closer than today with just three points separating first, second and third before Jeff Carter’s Edake sealed the deal winning the final race of the series.

The Edake crew is fresh back from winning the Corinthian World Title at the Farr 40 Worlds at Long Beach, California. Skipper Jeff Carter showed experience and consistency over all eight races and a win in the last race won them the regatta.

Tom Quick’s Outlaw was just two points behind Edake and once again found themselves on the podium in second place.

Local boat Good Form was looking like the hot favourite after winning the first two races on day two, however, Edake and Outlaw weren’t going to give up that easily and it wouldn’t be Farr 40 racing without an upset.

PRO, the legendary Ted Anderson, and his race management team had a challenging day on the water with persistent wind shifts as the southerly moved in. They absolutely nailed it getting the final race away with just two minutes to spare before the 1500hr final warning signal.

Kudos to Class newcomers Jason and Mary King’s Solymar and Janey Treleaven’s Finn. There was absolutely nothing in it between first and last. Well done Janey for sailing all weekend with a severely injured elbow.

The Class would like to thank the Newcastle Cruising Yacht Club for their superb hospitality and special thanks to PRO Ted Anderson and the race management team for getting eight races in over two days.