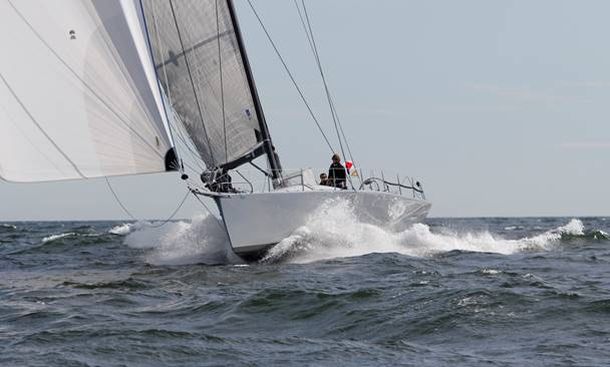 Siren will compete in the Transatlantic Race 2015 with father-son team of Bill and Will Hubbard. Photo courtesy of the Hubbard family.

NEWPORT, R.I. (June 18, 2015) – One of the greatest rewards of participating in the sport of sailing is becoming part of the larger sailing community: a group united by a shared love of the sea and the varied forms of sailing that take place on it. For some lucky sailors, that community includes family, and for the Transatlantic Race 2015, at least two fathers are cherishing the fact that they will share the challenge of sailing 2,800 nautical miles across the ocean with their offspring.

Bill Hubbard and his son Will Hubbard (both New York, N.Y.) will co-skipper the Reichel/Pugh 56 Siren, which will start off Newport’s Castle Hill Light on July 1 during the second of three staggered starts and begin the journey to the race’s finish at The Lizard, the southernmost point in England.  This will be the third Transatlantic Race for the Hubbards, who previously sailed the 2005 and 2011 editions.

“I am incredibly lucky to be able to have this experience with him,” said Will Hubbard of racing with his father.  “It’s special; not too many people get to do this at all, much less a couple of times.” Hubbard counts six Newport Bermuda Races, The Rolex Sydney Hobart Race and The Rolex Fastnet Race among the distance races that have factored into the 10,000+ nautical miles he and his father have sailed together.

When asked why the two were doing the Transatlantic Race for a third time, Will Hubbard laughed:  “Why not! We’ve been lucky the last two times, managing to do well in our class both times.  We hope to do it again.”

In 2011, the Hubbards sailed the race on Dawn Star, a C&C 36.  They endured no electricity for 10 days and limited weather routing. According to the youngest Hubbard, they were “more than anything, just happy to get there.”  Despite the difficulties during the race, the payoff came at the finish:  Dawn Star edged out Carina, the 48’ McCurdy & Rhodes sloop skippered by New York Yacht Club Commodore Rives Potts, Jr. (Essex, Conn.), by just over 54 minutes on corrected time to claim victory in IRC Class Four.

Among the skippers in the first start will be Bob Forman (Bayshore, N.Y.) aboard the Southwest 42 Jacqueline IV. With Jacqueline IV, Forman has twice won his class in the Newport to Bermuda Race, finished second in the Halifax Race and won the Annapolis to Newport Race, all with what he calls his secret weapon: his daughter Kara Foreman.

“She sailed with me in the 2011 Transatlantic Race where we finished third in class,” said Forman.  “It was a lifetime experience, but to do it with your daughter is something really special.”

Forman could not speak highly enough about his daughter’s sailing skills and contributions to the team. “Kara can do anything,” he said, noting that his daughter was a college sailor at Brown University and a member of the New York Yacht Club’s Wilson Cup Team that brought home the team racing trophy to the U.S. for the first time ever. “She’s my starting helmsman, and not only does she help drive the boat and navigate, but also she puts the meal program together. For 2011, she figured she prepared 441 meals in a six-day rotation using a combination of pre-prepared casseroles and freeze-dried foods. She even tests the food on her friends before we go and then doctors it to make it better.”

In the 2011 Transatlantic Race, Jacqueline IV took third in her class, finishing in 19 days, 21 hours and 15 minutes. “The wind averaged 13.3 knots for us; on our worst day we did only 73 miles and our best day we did 208 miles,” said the elder Forman. “This year is going to be different. The iceberg line is a lot farther south than in prior years. Unless something dramatic happens, the ‘Ice Gate’ will keep us pretty far south and put the Gulf Stream into play. The warmer temperature of the Gulf Stream can increase the wind speed by as much as 10 or 15 knots. If the wind is against the current, it will be a bumpy ride.”

Whatever the circumstances and regardless of how they perform, Forman will have accomplished what he wants most in having his daughter by his side.  “I’m lucky to have a daughter like her; she loves sailing, and so do I!”