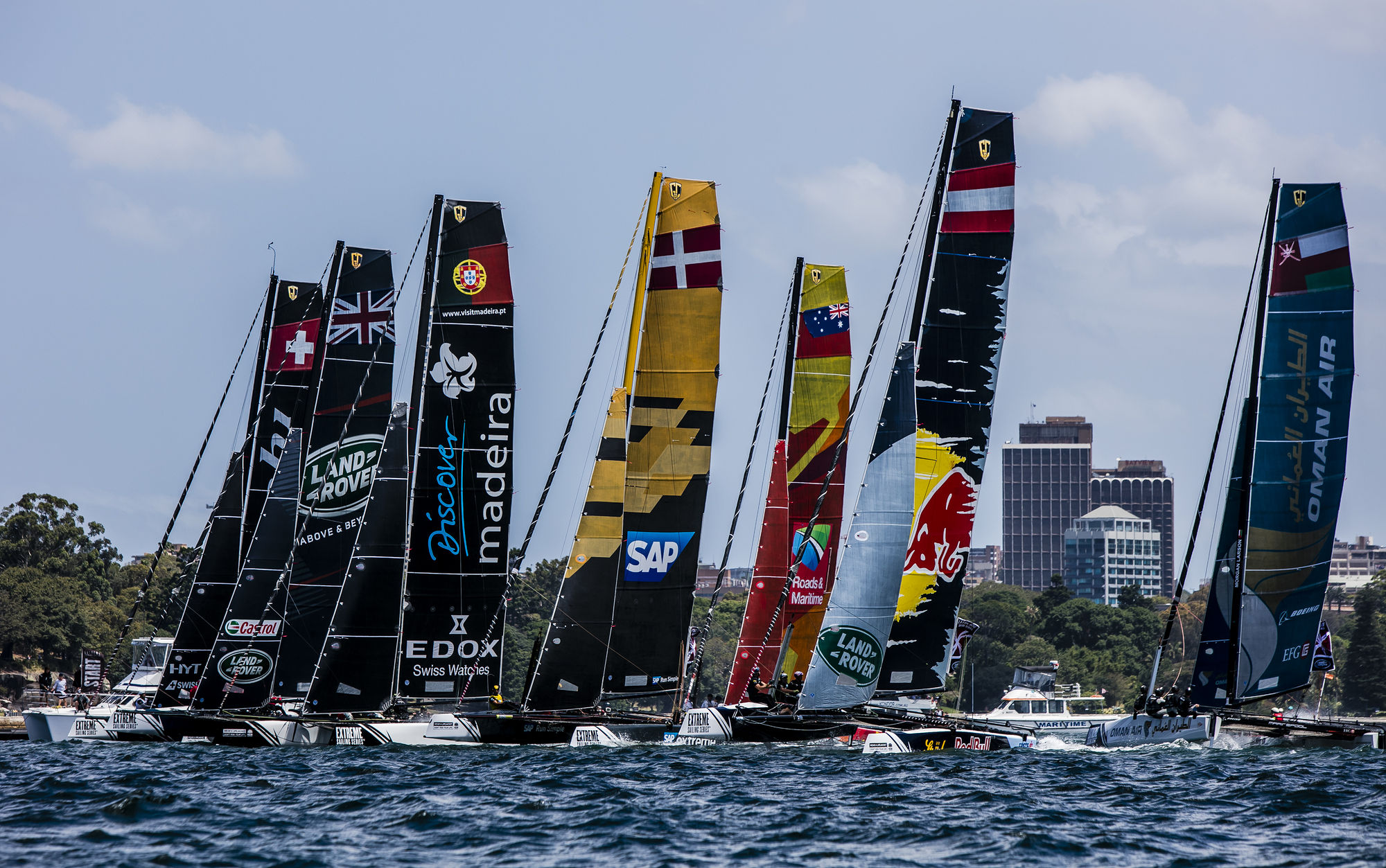 The GC32 fleet line up for a start during the penultimate day's racing in Sydney. Photo Jesus Renedo/Lloyd Images

The battle for the Extreme Sailing Series™ title took a new twist today as Red Bull Sailing Team squeezed in between Act 8 leaders Alinghi and overall table toppers Oman Air on the penultimate day of the 2016 season finale in Sydney.

Roman Hagara's Austrian crew had the pedal firmly to the metal as they notched up three impressive wins and three more podium finishes from the day's eight races, revelling in the fresh 13 to 20-knot easterly breeze.

As Red Bull Sailing Team celebrated their trio of back-to-back victories it looked like they were on course to end the day in pole position until Swiss crew Alinghi upped the ante claiming honours in the last two races of the day, leaving Hagara's men just six points behind.

Meanwhile overall Series leaders Oman Air were relegated to third place in the Act 8 rankings, 19 points adrift of Alinghi, following a mixed bag of results in which they only managed two podium finishes.

Just two points split Oman Air and Alinghi on the overall scoreboard, meaning the 2016 title will go to whichever of the two teams finishes Act 8 ahead. However, Red Bull Sailing Team could still win overall if they were to finish two places ahead of Alinghi and three ahead of Oman Air.

With the stage now set for a nail-biting showdown tomorrow, Hagara was pleased with his team's performance.

“We nailed it today,” said Hagara, no stranger to winning on Sydney Harbour after scooping the gold medal in the Tornado class at the 2000 Olympics on the same waters. “It was really great to have so many race wins. The conditions suited us; we definitely like the big breeze and our boat handling is working well.

“Our goal now is to keep on winning races. We're right up at the top of the table, it's perfect. We're going for our first Act win of the season for sure,” added the skipper, whose team has only ever previously won one Act in their time in the Series but has been on the podium at every Act this year.

Also finding their feet in the stronger winds were Danish team SAP Extreme Sailing Team, rocketing up the Act leaderboard into fourth place with four runners-up finishes. They now go into the final day just eight points behind Oman Air.

“It was a nice comeback for us today,” co-skipper Jes Gram-Hansen said. “We pushed a little harder in the starts but sailed the rest of the course better by being a little more conservative than we have been. Once you get that little jump on the fleet everything becomes a little easier, but when the racing is this close and this fast you can end up down the fleet if you make one mistake.

“The Act 8 podium isn't out of reach for us but then it's been like that a lot this season. We will just push again tomorrow and see how it goes.”

In a real show of their future potential Land Rover BAR Academy shot out of the blocks winning the opening race followed by a solid fourth place, but disaster struck in the third race of the day when part of their mainsail that holds it to the mast broke.

Alinghi, keen to see their British rivals back on the racecourse as soon as possible, came to the rescue offering up their spare mainsail. Neil Hunter's young crew missed the next two races while the new sail was retrieved and fitted but they came back guns blazing with a trio of podium positions. The missed races meant they dropped from fourth to a disappointing sixth on the Act leaderboard.

“Big thanks go to the Alinghi guys for lending us their spare which allowed us to compete in the last three races,” Hunter said. “It was really kind of them to get us back into the racing. It is annoying to have missed those three races. It puts us out of contention because we'd be right up there otherwise on the overall leaderboard.”

The two wildcard teams, Team Australia and RNZYS Lautrec Racing, were put through their paces by the regular Series' crews and got a taste of some classic Stadium Racing.

“It was really fun, it was basically ideal conditions; when it comes to that sort of racing you can't get much better. I'm sure it looked pretty good from the shore,” said skipper of the Kiwi entry, Chris Steele.