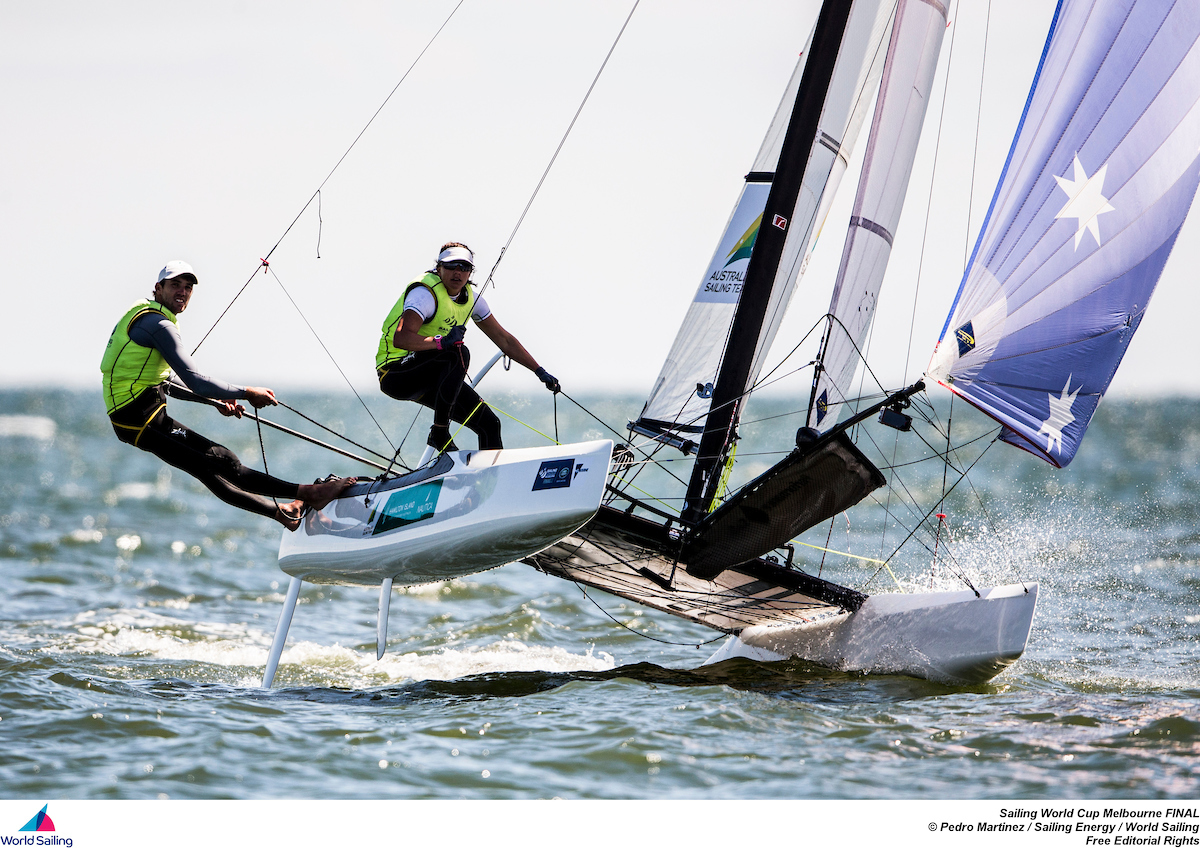 Australians have won Gold in two classes, Silver and Bronze on the penultimate day of SWC Melbourne 2016, the final event on the World Cup circuit for 2016.

Rio 2016 Silver Medallists, Jason Waterhouse and Lisa Darmanin won the medal race today to take the Gold in the Nacra 17.  The Aussies were very happy with the win, particularly given this week was their first time sailing the Nacra together since the medal race in Rio.

“We had a really fun day out there,” said Waterhouse at the conclusion of race.  “It was really shifty and quite challenging. We were watching the other fleets and we saw several start line disqualifications, so we knew we had to be careful.

“When we finally got out there, we got a good start and controlled the race from there.  We were leading at the first bottom gate and probably made the wrong call so we had to fight our way back, but we had fun doing it.

‘Next up is a bit of training back at home (Sydney) and then I’ll head back to Bermuda (for America’s Cup preparations) in the new year.  Lisa and I will try and do a training camp in Bermuda ahead of our first big regatta next year – the Nacra Europeans in Kiel during July.”

In the 49erFX class, Tess Lloyd and Eliza Solly also won their medal race to take the Gold in their class.  The Aussie girls have sailed consistently this week, winning three of the six races in the preliminary series.  Haylee Outteridge and Nina Curtis finished today’s medal race in fifth place, which was enough for them to secure the Bronze.

In the 49er class there was heartbreak for the Phillips brothers in today’s medal race.  The Aussies were blackflagged in the medal race, dropping them from their overnight lead to fifth place overall. Harry Morton and Harry Price won the Silver, while David Gilmour and Joel Turner finished in fourth place.

It was a mixed day for Jake Lilley in the Finn class, sailing in the final races of his preliminary series.  Lilley was u-flagged in the first race of the day, but came back to win the second race of the day.  He takes a six point lead into tomorrow’s medal race ahead of Great Britain’s Ed Wright.  Oli Tweddell goes into tomorrow’s final race in fifth place, after scoring a 3 and a 5 in today’s two races.

“I’m very happy to be back racing the Finn,” said Lilley. “I'm just suprised I can remember how to do it and I'm actually really pleased with how I am racing at the moment.”

Mat Belcher and Will Ryan also had a mixed day.  In the shifty conditions, they were u-flagged in their first race, but came back to win the second race of the day.  They take a 20 point lead into tomorrow’s medal race.

In the women’s 470 Carrie Smith and Jaime Ryan had two second placing’s today, finishing behind the Austrian team of Vadlau/Ogar in both races.  The Aussies go into tomorrow’s medal race six points behind the Austrians, so it will be nail-biting action!

In the Laser Radial, Australia’s Ashley Stoddart has dropped to sixth place overall after scoring 8 and 13 in today’s two races.  Stoddart will sail in her medal race tomorrow.

In the RSX Women’s event, Joanna Sterling finished her regatta in ninth place overall after an eighth placing in the medal race.