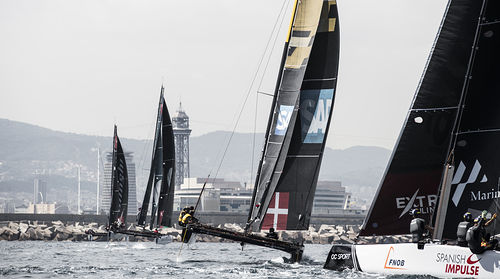 There's cause for celebration today in Barcelona, as home team Spanish Impulse finished day two of Act 3 on a high, clocking podium finishes in both the first and last races of the day.

As the crowds on the coastline cheered and waved in support, the Spaniards took the second day of the Barcelona battle by storm.

Spurred on by the spectators, the team zoomed around the racecourse at speed. A delighted Diego Botín, skipper for the team, stepped ashore smiling.

“We are very happy today,” he enthused. “One more day in the bag, learning in this type of boat and as a team. We're drawing many conclusions and we are thrilled with our performance. We have managed to score highly in two races today, and we are improving little by little.”

Extreme Sailing Series fans will have experienced a touch of deja vu as Red Bull Sailing Team and Oman Air battled it out for a second day win – the same two teams fighting for first in last year's Barcelona Act.

Putting in a repeat performance of yesterday's winning form, Austrian challengers Red Bull Sailing Team sailed with consistency throughout the afternoon, demonstrating the sheer expertise of their team.

They were a little too keen to bag a bullet though, suffering an OCS (over the start line early) in two consecutive races. Ultimate determination saw the team recover well; flying through the fleet, they took four podium finishes before being knocked into third by rivals Oman Air and Swiss-flagged Alinghi in the final race of the day.

Red Bull Sailing Team Sport Director, Hans Peter Steinacher, commented on today's results: “We are racing for the win here,” he said with confidence. “The points are very tight. In every race it's a different situation. There are still a few days to go and like we know in the Extreme Sailing Series, it'll come down to the last race.”

Last year's Barcelona Act winners Oman Air sailed with impressive skill straight off the start line, taking the first race win of the day and a total of five podium finishes throughout the afternoon. Skipper Phil Robertson commented on the competition on the water.

“We are seeing the game rising,” he explained. “It's because the teams are strong and everyone is pushing each other to go bigger and better. It's good action and for sure, we want to be beating the others.”

Race Director John Craig worked the teams hard, with as little as three minutes between races. Conditions on the racecourse varied across the afternoon, starting light and increasing as the thermal breeze came in.

INEOS Rebels UK skipper, Will Alloway, enjoyed today's racing. “Once that thermal wind came through and the breeze swung round to the right, we had pretty nice foiling conditions this afternoon. A good day for sailing,” he said.

Over on the Flying Phantom course, Team France Jeune reclaimed first place from Idreva Zephyr Foiling. Following Act wins in Muscat, Oman and Quiberon Bay, France, the French foiling superstars are aiming to make it a hat-trick here in Barcelona.

The Flying Phantoms are due to take flight at 12:15 CEST tomorrow, with the GC32 racing scheduled to start at 15:00. GC32 racing will be streamed LIVE on the Extreme Sailing Series Facebook and YouTube.