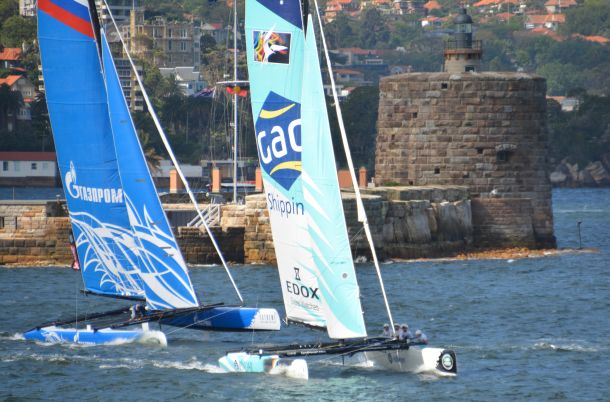 Extreme Sailing Series organiser, OC Sport, has today confirmed Sydney as host venue for the final Act of the 2015 season, in partnership with the New South Wales Government’s tourism and major events agency, Destination NSW. The 2015 eight-event global tour will culminate in Sydney from 10-13 December.

NSW Minister for Trade, Tourism and Major Events and Minister for Sport Stuart Ayres said: “The NSW Government is pleased to have again secured the Extreme Sailing Series for Sydney, through our tourism and major events agency Destination NSW. Taking place on the spectacular Sydney Harbour, it promises to be a fantastic experience for competitors and spectators alike.”

Thousands of spectators are expected to line the Royal Botanic Gardens and Sydney Harbour walkway to watch as the best in the business, including some Australian homegrown talent in Seve Jarvin and the crew on GAC Pindar, go head-to-head on a racecourse set between Garden Island and the Sydney Opera House.

“You can’t really beat the feeling of racing on home waters,” Jarvin said. “I’ve sailed here since I was six-years-old with my family so it’s exciting to come back with such a high profile fleet and I have no doubt the public will get behind the racing again this year. December in Sydney is always beautiful conditions for racing and the guys can expect a north east sea breeze and lots of sun – it should be perfect.”

Another local talent sure to enjoy the experience is Jason Waterhouse who fits the Extreme Series on Red Bull into his busy Olympic schedule.

Andy Tourell, Extreme Sailing Series Event Director, is delighted the Series is returning to Sydneyy. “Destination NSW understand what the Extreme Sailing Series is all about – the combination of elite level racing and entertainment, competing directly in front of the spectators. Against the stunning backdrop of the Sydney Opera House, racing just metres from the shore in an easy-to-understand format, it is not just aimed at sailing fans, but to everyone.

“The race village, within the Royal Botanic Gardens, will provide the prime viewing position and plenty of free entertainment for the whole family. The natural love for sport within the country make this a really unique venue in terms of the passionate welcome and overwhelming support we received in 2014. I have no doubt we will experience that again this year,” added Tourell.

The global circuit is now in its ninth year and so far in 2015 has visited Singapore, Muscat, Qingdao, Cardiff, and Hamburg, with Saint Petersburg, Istanbul, and Sydney all to come.