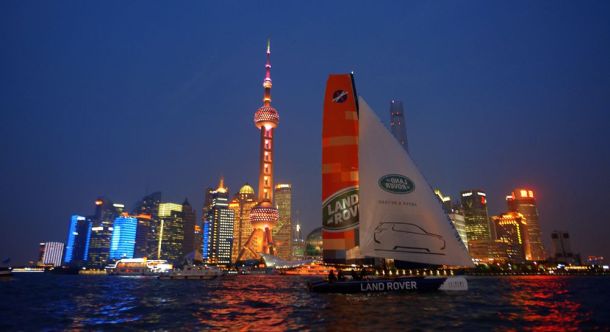 On one of the world’s busiest waterways, the Huangpu River, in the Bund area of Shanghai, hundreds of thousands of passers-by were stopped in their tracks today by the unique sight of the Land Rover Extreme 40 sailing on this iconic waterway alongside cargo ships, tankers and passenger ferries. The Land Rover Extreme 40 sailed right through the heart of Shanghai’s financial district in celebration of Land Rover China’s sponsorship of the Shanghai International Boat Show.

The Land Rover Extreme 40 also joined the dazzling night skyline with an evening fly-by, stunning the passengers on the river cruise boats who were given a spectacular display.

Navigating the busy waters and crewed by four international sailors, this history-making sight is the first time a professional racing boat has sailed on the waters alongside the Bund. For Extreme Sailing Series organisers OC Sport, this activation demonstrates the potential of bringing the highly contested Series to Shanghai as one of eight Acts on the annual global tour in future years – a vision shared by Series Main Partner Land Rover.

“Most of the venues we use for the Extreme Sailing Series are very challenging. Here in Shanghai we are in the centre of a busy city, we have a very commercial waterway with hundreds of boats passing every day, but OC Sport, Land Rover and the hundreds of thousands of Chinese public walking along the Bund today have all been really excited to see it here on the Huangpu River. It’s been an incredible event.

“With the Land Rover Extreme 40 sailing here, it highlights the potential opportunity Shanghai has as a future host venue for the Series, which is a very exciting prospect. OC Sport is forging ever stronger links in China, alongside Land Rover who are committed to aiding the development of sailing in China,” Lawrence concluded.

Mark Hall, Land Rover Brand Executive Vice President, added, “The Shanghai International Boat Show is the perfect platform to demonstrate Land Rover’s commitment to sailing. We are extremely proud to see our Extreme 40 sailing on the iconic Bund or Huangpu River – the first time this boat, or any like it has ever done so. Our shared values of adventure, composure and strength of mind are reflected in this endeavour and in Land Rover’s “Above and Beyond” philosophy, which has been at the heart of everything we do for the past 67 years.”

The spectacle comes as the Extreme Sailing Series prepares for Act 3 Qingdao (30 April – 3 May), when the fleet of eight elite Extreme 40s descend on China’s ‘Olympic Sailing City’ for the fifth consecutive year to compete on the city-centre stadium racecourse.