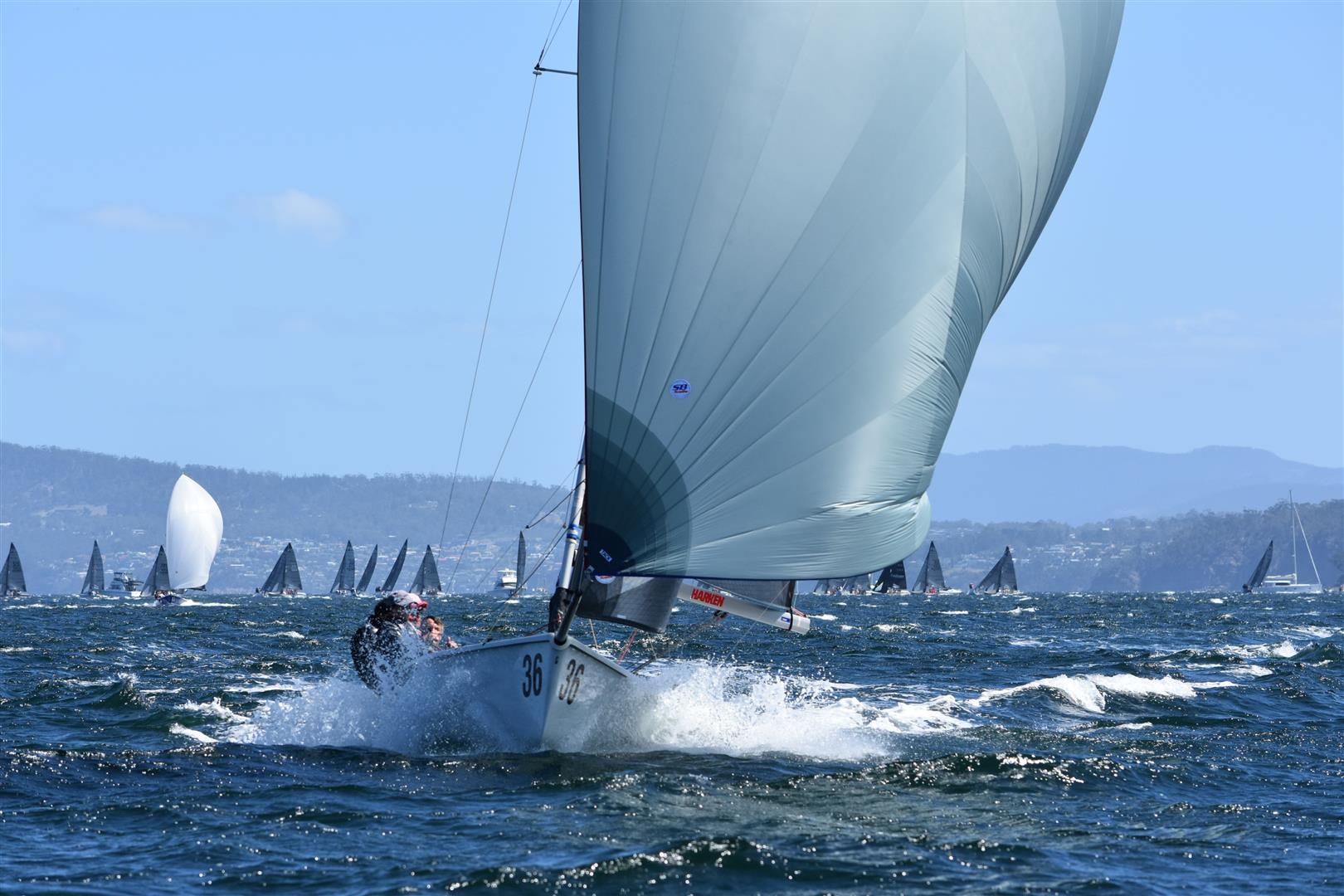 Hobart yachtsman Michael Cooper yesterday made an impressive start to winning the SB20 World championship on the River Derwent that he so narrowly missed at Cowes, England, last August.

Steering Export Roo, with same crew of David Chapman and Gerry Mitchell, Cooper scored two third places and a win on day one of the 2018 World Championship on his home waters. This has given Export Roo a commanding early lead in the four-day, 12-race regatta for these high performance, one-design sportsboat, crewed by three or four sailors, men, women and teenagers, with skippers ages ranging from 13 to 60 years plus.

Hobart and the River Derwent turned on brilliant sailing conditions for the 59 boats, 18 from overseas, contesting the Worlds – a south-east to south-westerly seabreeze freshening from 12 knot to !8 knots of the end of the day.

After three races, Export Roo has six points on the leaderboard, 13 points clear of his nearest rival, the French boat Le Grand Reservoir/Mazet & A (Achille Nebout) which placed 2-11-7 for 20 points.

Cooper showed his local knowledge by being the first to gybe on the final spinnaker run of the last race and stayed with the breeze while the following boats fell into a ‘’hole.’’

The Hobart businessman lost the 2017 Worlds on The Solent at Cowes to noted British yachtsman Jerry Hill by two points, with Hill using his own local knowledge in the final race.

Cooper has avowed revenge and is not only leading the 2018 Worlds but is also 24 places ahead of Hill, who today placed 4-38-28 in sportsboatworld.com

The Honey Badger’s other placings have been a 19th and a 14th for a total of 34 points.

Yesterday’s three races produced three winners, Export Roo, The Honey Badger and a Russian crew of MST who arrived in Hobart late last week and did not contest the Pre-Worlds.

However, Vasily Grigoriev and his crew showed great downwind speed to snatch victory in race one, crossing the line just seconds ahead of French Youth sailor Robin Follin in Take Me 5 -French Youth Team.

However, the French boat was disqualified under the Black Flag (BFD) rule following a general recall, along with three other boats.

Leading ten boats after three races on day one: