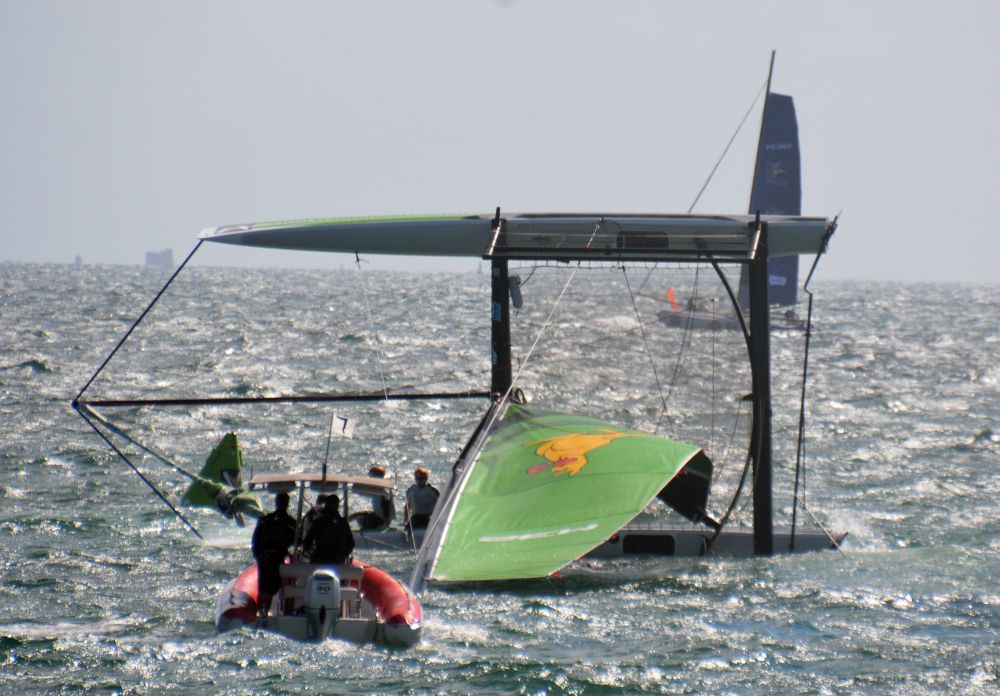 Jaochem Aschenbrenner and his Danish crew in the water after a capsize. Photo Roger McMillan.

The second day of the World Match Racing Tour's first event in the exciting M32 catamarans continued in Fremantle with fleet racing – and the rich got richer.

The 20 skipper fleet has been divided into four groups of five and today they sailed in reverse order. This meant that the first group from yesterday, who sailed in the shifting and lighter morning winds, should have been last away in the stronger afternoon sea breeze.

Group 4 was therefore first away in a moderate south-westerly breeze and the young Swede Nicolai Dackhammar showed that all the time he has spent on these boats on his home waters could be transferred into Australian conditions. He started with three bullets before being forced into second place in the final race by Australian tour card holder Keith Swinton. Swinton finished last in two of the three races yesterday but today his crew work was slicker and his starts were much sharper.

The race pattern is very interesting. In dscussions with the skippers last night, they confirmed that whoever wins the start is in a strong position to win the race, but that even in the steady winds that Fremantle tends to deliver, there are passing lanes for the other four boats. They said there were risks associated with trying to get perfect position for the start because a slight misjudgement could see them spat out the back. Hans Wallen said it was “a 50/50 proposition”.

The four races that this group sailed all followed the pattern, with the leader at the first mark extending away to generally win comfortably, while the other four crews got into some interesting scraps for the minor spoils. For the first time we heard voices raised in anger and the on-water umpires were called on to adjudicate a couple of close exchanges.

When the spray had settled, seven races had been run and one drop was allowed. That left Dackhammar clearly at the top with nine points, followed by Swinton on 16 and Eric Monnin (SUI) on 17. They automatically qualify for the final 16 who start match racing tomorrow. The two local hopes, F18 champion Brett Burvill and Peter Gilmour's middle son Sam, are the two who will go to the repercharge and fight for the final four places available.

By the time Group 3 hit the water, the wind had risen to 20 knots and would build to over 25 by the fourth race. Those are marginal conditions for these lightweight skiffs but the three more experienced skippers handled them with relative ease.

Phil Robertson, the Kiwi who helmed Gazprom in the Extreme Series, has been one of the stand-out skippers and apart from the fifth race when he suffered a breakage on the traveller when leading, he put together a consistent scoreline which included four bullets, a second and a third to win the group by five points.

Hans Wallen is not a household name in Australia, but in his native Sweden he's a hero. Winner of a silver medal at the 1996 Olympics in the Star class and the 2014 M32 champion, he is also a character who obviously enjoys life to the full. Wallen and Jann Guichard, the charismatic Frenchman who has gone from a 47 day round-the-world race straight into these 10 minute super-sprints, fought each other to a standstill, with the Swede victorious by a single point.

These three skippers had too much experience for the young match racers from South of Perth Yacht Club. Despite some meorable moments, Matt Jerwood and his former crew, Mark Whittington, tended to be fighting for fourth and fifth and will now face the repercharges.

Yesterday Group 2 started in light airs and the wind built to around 20 knots. Today they started in 25 knots and it built quickly from there. By the time the fourth race had been run, we had seen a capsize and four or five near-misses during bear-aways. White water was flying and at times it seemed the whole crew would be washed off the boat.

Former WMRT champion Taylor Canfield handled the conditions best, adding four bullets to his overnight score. He finished on just seven points and his drop was a second place. Mattias Rahm also spent most of the series in total control, recording three second places and a third for a total of 11.

But in many ways the stand-out performers were Murray Jones and his crew from the CYCA. They are the youngest crew in the event but handled the conditions like veterans. Unafraid to attack their more experienced rivals, they gave the large spectator contingent watching from the shore plenty to cheer about, especially when bearing away or charging at full speed into the bottom gate with gennaker flying. Jones got his reward, qualifying third on 20 points and progressing straight to the final 16.

Chris Steele from New Zealand finished fourth on 23 points but the young Dane, Joachim Aschenbrenner, was the culprit who capsized right in front of the beach, almost taking out another boat with his forestay. Aschenbrenner is the “accidental skipper”, coming to Australia on a whim after the Youth Worlds in Malaysia and qualifying for this event at the South of Perth Match Cup last week.

Showing that these M32s are tough, the green boat was righted within minutes and the Danish crew managed to resume racing. However, race management decided enough was enough and Group 1 will again face the lighter winds tomorrow morning after racing was suspended at 4pm. Ian Williams leads that group with three bullets.