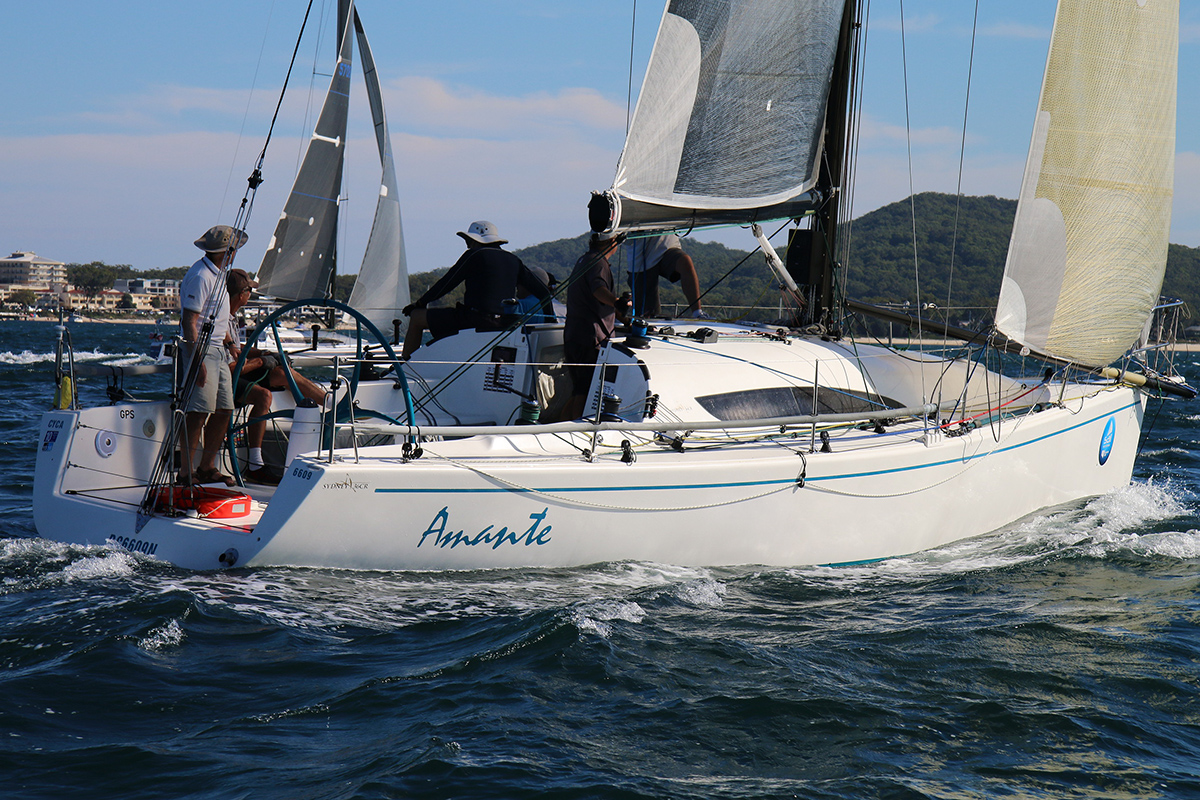 Day two of the Commodore’s Cup at Sail Port Stephens yielded a new division one winner and though the Archambault 32 Esprit’s handicap slug after day one made a second victory much tougher, sailing couple Jane Bartels and Greg Wilkins romped in another division two win.

Dennis Cooper’s Sydney 36cr Amante suits a windward/leeward track in fresh conditions, the reason Cooper “thought we were in amongst them” when told of his division one corrected time win. “The boat seemed to be on fire upwind in 18 knots and a really nice run in 20 knots at the right time helped. Yesterday we got everything wrong and today we got everything right!

“This is my seventh Sail Port Stephens in a row and we are sailing with a mixed bunch of my regular twilight crew and long-time sailing friends from 40 years ago. Our bowman is nearly 80 years-old and at least half the crew would be over 70. We come to have fun and have a great social week. We are hoping to go offshore tomorrow… I’m predominantly an offshore sailor,” Cooper added.

If wind and swell conditions are favourable, the Pantaenius Commodore’s Cup fleet will head offshore on Wednesday around an islands course for the concluding third race of the series.

Their perfect scorecard has the Archambault 32 Esprit leading the division two overall pointscore.

Second today was the Beneteau Oceanis called ‘New Beneteau 41.1’ (Micah Lane) being showcased at its first regatta as a lighter version of the 41. Lane and multiple 18ft skiff champion Michael Coxon on the helm plus James Dorran from the 18-footer Asko Appliances have the new boat powered up nicely in the fresher conditions.

Third was Rocksalt, Anthony Bishop’s Dehler 38, crewed by another rock star team made up of Team Windcraft guys and North Sails’ Alby Pratt. Originally from New Zealand, Bishop bought Windcraft and now he’s sailing one of his range, the third boat he’s owned but the first time he’s been part of a race program.

“We’ve had a great couple of days with a bit of everything and we’ve had all the sails out,” Bishop said. “My long-term plan is to focus on inshore regattas and get the boat going well.”

At 13 years-old Jessica Campbell is the youngest skipper at the 10th anniversary Sail Port Stephens and on Tuesday she helmed her family’s 38-footer for the 15 nautical mile passage race, including the hectic start in a fast-running tide that threatened to carry boats over the start line off the Nelson Bay breakwater pre-gun.

Jessica began sailing at six and cut her teeth in the Pelican and BIC classes until her mum and dad bought the Northshore 38 Cipriani, the boat dad Geoff partly built when he worked for Northshore back in the 1980s. In fact his pencil marks can still be seen inside the hull.

The family decided Jessica and her older brother Nicholas could start school holidays early and the teen is soaking up the opportunity to helm among a record Commodore’s Cup fleet.

Many in her generation have Olympic dreams but Jessica says her future is offshore sailing. “The first year I’m able to do the Sydney to Hobart race I really want to do that!” This means a five year wait until the minimum age of 18.