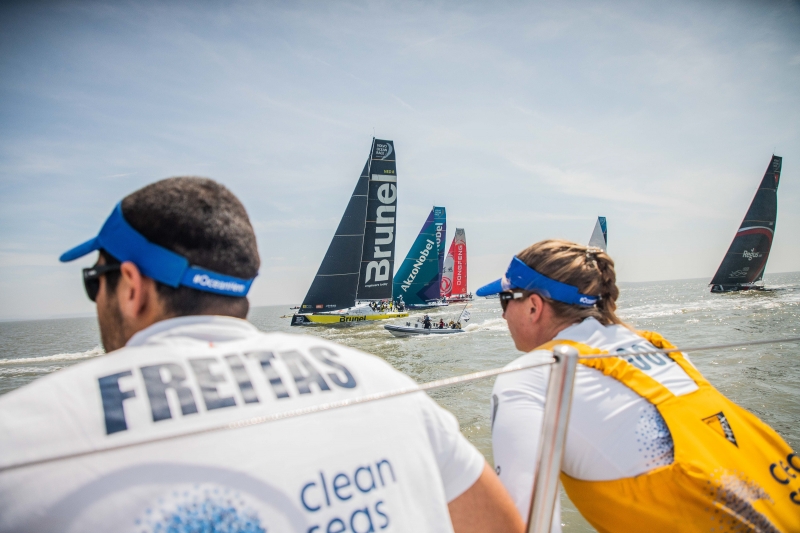 Cardiff stopover. Practice race on board Turn the Tide on Plastic. 06 June

It’s getting tense now as we reach the stage in the Volvo Ocean Race where every single point counts.

The top three teams in the race are heading into the final two legs separated by just three points on the race leaderboard.

After racing over 40,000 nautical miles, Charles Caudrelier’s Dongfeng Race Team, the new overall race leader, is ahead of the Spanish MAPFRE team by just one point, with Team Brunel two points further back.

The tight overall race leaderboard is bringing the In Port Race Series standings into focus.

Should there be any ties on the overall leaderboard at the conclusion of the Volvo Ocean Race in The Hague, then the final position of the teams at the In Port Race Series will act as the tie-breaker.

MAPFRE, skippered by Xabi Fernández, currently holds the tie-breaking trump card, sitting at the top of the leaderboard for the series, with three race wins and four second place finishes to boast the most consistent podium results.

Eight points behind is Dongfeng Race Team, winners of three in port races, but held back in the series standings by one disappointing result in the China stop.

The two Dutch-skippered entries, team AkzoNobel and Team Brunel are battling for the final podium spot, with Bouwe Bekking’s Brunel, just one point ahead of Simeon Tienpont’s AkzoNobel.

It’s all to play for with just three contests left in the In Port Race Series… the action starts in Cardiff on Friday at 1400 local time.