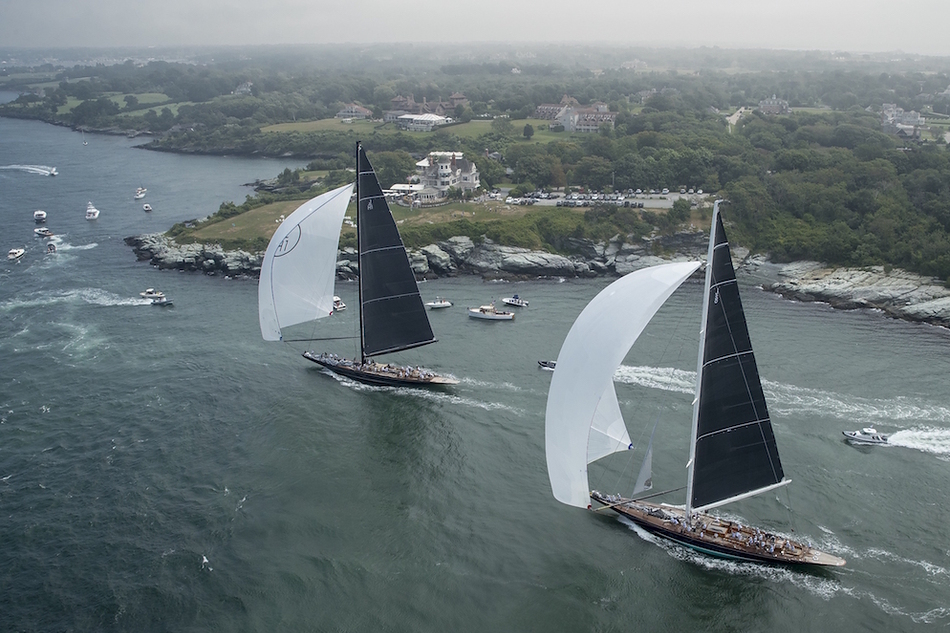 The sizeable spectator fleet on the waters off Newport, Rhode Island were treated to another pair of engaging, exciting races at the inaugural J Class World Championship, witnessing the return of one of the pre-regatta title favourites, Lionheart.

The team, lead by Bouwe Bekking, won the first windward-leeward and then battled to third in a second race in which Hanuman, skippered and steered by Kenny Read, was dramatically penalised during the top mark approach of the second beat.

Hanuman's resulting fifth costs them their clear overall lead in the no-discard championship series which completes Saturday and she is now tied on 13 points with Lionheart, winner of both significant J Class regattas during the America's Cup in Bermuda in June.

With the owner driven Lionheart winning today's first contest and Topaz the second, half of the six boat fleet have now scored a race win so far. With local Newport ace Tony Rey aiding Ross MacDonald with big picture strategy, Topaz's second race victory of the regatta promotes them to third overall, four points off the lead.

Patience and conservatism are proven, necessary virtues of the Lionheart afterguard, often contributing to their numerous regatta titles. Even so their patience was slightly tested by their arch-rivals on the first beat of the second race.

On a right favoured upwind Bouwe Bekking and the Lionheart crew had to sit pinned by Hanuman until both title rivals lost out significantly to the pack on the right, Lionheart rounding the top mark in sixth. But Lionheart's opportunity came around when Hanuman fouled. Taking full advantage of their place gain they pressed hard and smart down the last run, pipping Svea to third on the approach to the finish.

“It's all on now, isn't it,” said Lionheart's Bekking as he hosed down the black hull of Lionheart back at the dock in the Newport Shipyard. Of their inherently low risk philosophy which sometimes contrasts with the gambles taken by the pro driven teams.

The seven-time round the world racer considers: “The thing about risks is that I don't want to take them. We have to be very careful. There is a big difference between and owner-driver and a professional driver. If you put yourself in a difficult spot then sometimes it will come back and bite you on the ass.” .

“We just know that we can't put the boat in a situation which might prove tough. That's why we cannot afford to get it wrong. We maybe sail safe and a bit conservative because I have an owner-driver who sails the boat beautifully but there are positions I just don't want to get us into.

“On that first beat second race we just had to be patient. If you tack away you get slammed and you cannot afford that in these boats. So you wait for the opportunity. And they come. You have to be conservative and wait, minimise your losses,” Bekking ended.

Lionheart won the first race of the day, contested in 9-10kts of south-westerly breeze. Along with Svea they gained on the right, chasing Hanuman around the first windward mark. Her crew executed a smart gybe set and came in from the left of the downwind to make an equally tidy gybe drop and establish themselves on the preferred right.

Bekking and crew lead Hanuman through the finish line by 21 seconds with Svea holding on to third all the way through the race.

The two boats which went right early Ranger lead Topaz around the top mark of the second race which enjoyed perfect 13-15kts sea breeze conditions with pleasant sunshine enhancing the viewing pleasure for the spectating boats which flanked both sides of the course.

However, after the leeward gate Topaz got right earlier, from the left hand mark looking downwind, and were able to lead at the final turn. Hanuman, coming in on port and looking to consolidate a small gain, tacked in front of third placed Svea and was judged to have fouled them, the umpires calling a penalty.

Local knowledge has clearly contributed to Topaz's two wins, strategist Tony Rey – on his first ever J Class ride – reporting, “The sea breeze here is a tricky beast. I have a pretty good feel for the breeze. A lot of the time you can't physically get the boat to where you want to be, but the sea breeze here is different depending on how the clouds are setting up.

“Today we saw an earlier fill that forecast and a typically left sea breeze, marching left to correct from 240 to 210. But at some time the right comes good and today I was surprised that it came good an hour earlier than I thought it would. The second race you could not go right hard enough. It was go to the corner and ring the bell.

“We are having some challenges with our upwind boat speed.” Rey continues, “We are good enough downwind but we are working on our upwind. By Saturday we will be ready to race this regatta.”

It was a better day for the mighty Ranger holding fourth overall, returning a 3,2 to keep them ahead of the newest team on the blocks, Svea but only on countback.

“We are generally happy with the way we are sailing the boat. The second race we lead but we could not quite lay the left hand gate at the bottom and we got a bit left and lost few lengths on Topaz but that was all that was in it. We sailed well downwind. We were happy with today,” Murray Jones, Ranger's tactician, said.