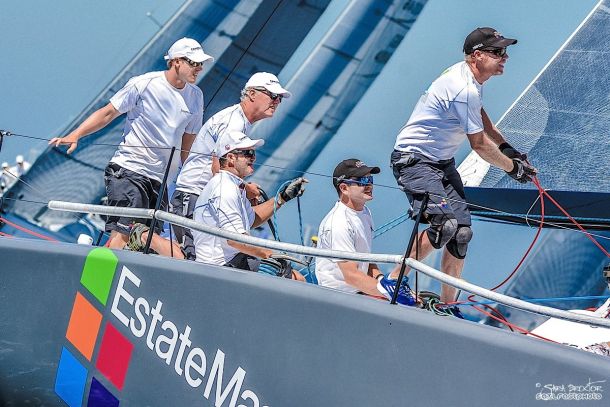 Martin Hill and his Estate Master crew may not have won the 2015 Rolex Farr 40 World Championship, but the Australians finished on a high note by winning the final race off Long Beach, California today.

Estate Master finished the Worlds as she started out – in sixth place overall. In the final two races she scored seventh and first places to close the gap and finish one point behind fifth placed Flash Gordon 6 (Helmut Jahn).

Hill, who represents Middle Harbour Yacht Club and the Royal Sydney Yacht Squadron, said that while the team did not achieve the hoped for fourth overall, they were on a high after winning Race 11 to cap off four days of incredible racing and in conditions they are at their best in.

“We put our seventh place behind us and lined up for the last race. The line had a pin end bias. We got a great start in clear air and a good shift so we port-tacked the fleet. We led the whole race to win,” an elated Hill said ashore this afternoon.

“Conditions were perfect for us; 14 knot winds and we extended our lead. We knew the top three were behind us fighting it out for the Championship. The end of the race was really exciting, with choppers flying over and spectator boats around.”

The battle between the top three raged behind Estate Master with the trio trading places around the course.

A new world champion was crowned when John Demourkis (Groovederci) sailed over the top of defending world champion and Championship leader, Plenty (Alex Roepers), to finish second in the final race to claim his first world title in the one-design class.

Plenty (USA) finished Race 11 in seventh place, handing Groovederci the title by one point. Struntje Light (Wolfgang Schaefer) was eighth in that race, enabling the German boat to hold on to third overall, three points behind the winner.

Hill, who skippered the only Australian entry taking part, is also the President of the Farr 40 Class. On the event as a whole, he commented: “It was a great Championship. The lead changed constantly every day and we have a new world champion.

“The level of competition could not be any better, and you expect that when you have high level racing and the who’s who of tacticians in the fleet: Ian Williams, John Kostecki, Sten Mohr, Vasco Vascotto, Morgan Larson, Terry Hutchinson and Francesco Bruni.

“Our thanks go to the organisers who put on a wonderful event. Long Beach Yacht Club made us all welcome,” he said.

Hill said his crew was now looking forward to the end of regatta celebration party.

“Rolex has got a fantastic party ready to go for all of us. We’re in for a great night – a wonderful way to end the Championship,” he ended.

The Rolex Farr 40 World Championship was hosted by the Long Beach Yacht Club. Estate Master was one of 17 boats from six nations.