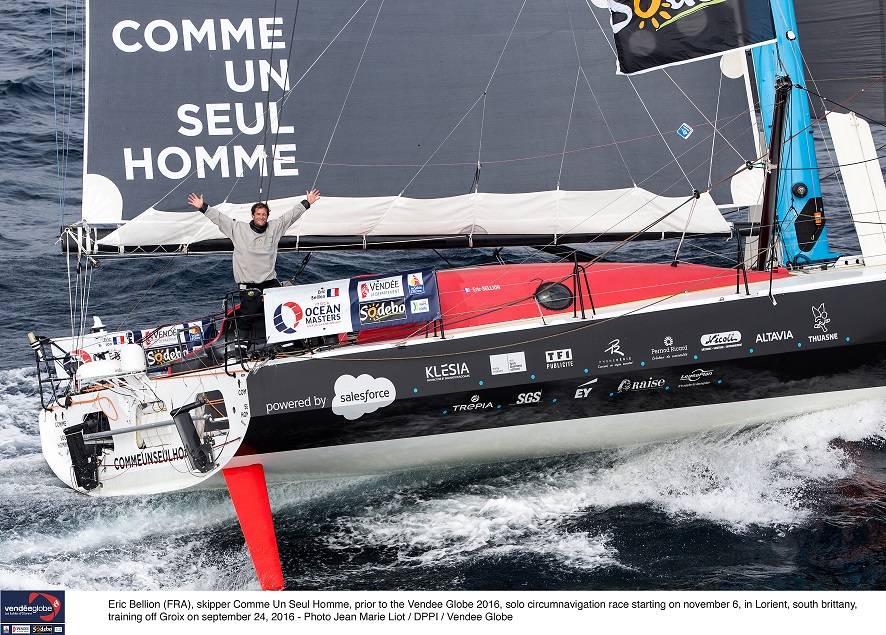 From one of the most prolonged and challenging storms encountered by any of the 29 skippers who left Les Sables d'Olonne on Sunday November 6th last year, French solo skipper Eric Bellion emerged triumphant, securing a remarkable ninth placed in the Vendée Globe solo round the world race when he crossed the finish line at 1658hrs UTC. Bellion took 99 days 4 hrs 56 mins for his actual 28,048 miles route, averaging 11.78 kts. He is the first ‘rookie' solo skipper – someone who had never before started the Vendée Globe – to complete this eighth edition of the solo round the world race.

Although he is a vastly experienced sailor in his own right with a circumnavigation already to his credit, he only raced an IMOCA 60 foot race boat for the first time 15 months ago. For a skipper who set out largely to see if he could complete this race, one of the toughest challenges in global sport, his ninth place is well ahead of all his pre-start hopes and wildest dreams.

Bellion's odyssey is a classic tale, revealing a huge increase in personal confidence and solo racing ability but is a result which comes neither by luck nor by accident. An accomplished and inspirational leader who assembled an excellent support team in cooperation with double Vendée Globe winner Michel Desjoyeaux's company Mer Agitée, Bellion's Vendée Globe started relatively slowly but saw him faster and faster during his first time racing in the ‘big south', dealing strategic and mental challenges of a slow, light wind South Atlantic climb, and the final big hurdle – a vicious four day North Atlantic storm which ripped a section of his mainsail mast track off and which left him racing the final miles upwind across the Bay of Biscay with just his J3 jib and no mainsail.

Bellion's CommeUnSeulHomme (meaning Stand As One) project promotes positive roles for people of diverse abilities, encouraging companies and organisations to embrace less able workers and realise the positive contributions made. Under the banner #appelpourladifference he has mobilised hundreds of thousands of followers to realise his positive messages. Fourteen different companies with more than 80,000 workers have supported his programme.

Before the start Bellion said: “I'm approaching it with a real sense of pleasure. Sailing is my passion and I feel at home in the middle of the ocean. Sailing in solo configuration is not something I've ever done before so it's a big challenge. This Vendée Globe is a gift to myself for my fortieth birthday! I position myself among the non-professional sailors and I'm here as an amateur and an adventurer. I'm not putting myself under any pressure. I'm just aiming to sail a clean race and be proud of myself at the end.”

Explaining the roots of his passion for diversity and inclusion he explained: “As a child, I was taunted about my father's stuttering and I didn't understand. Later on, I sailed with mixed crews of able and less able-bodied sailors and there I understood that difference is a key factor in a team's happiness and success. Being different is one of the hardest things to live with, but if we want to be happy and grow together, it is the only way forward.”

Bellion's partnership with his boat, the Finot designed former DCNS, grow stronger with every mile. In fact his boat had never finished a major IMOCA race, indeed had never made it across the Equator until he and young British skipper Sam Goodchild raced the Transat Jacques Vabre in 2015, as Bellion's first big race. They finished seventh and the French skipper learned a lot.

Goodchild said today: “Eric was clearly a very experienced sailor with many ocean miles under his belt but he knew nothing about an IMOCA or solo racing when he started. But he always made it clear he wanted to learn. It was impressive to see how quickly he learned though. Most of all it was fascinating to work with him, he is incredibly inspirational. Three years ago he basically knew enough to be safe at sea in any conditions, but now here he is finishing ninth in the Vendée Globe. He had a dream and he set out to achieve it. Behind the scenes he has a very happy, hard working team who have prepared the boat so well and that is an insight as well into how he manages and inspires everyone to do their best work. At first he struggled with the whole thing, how to sleep when your boat is doing 20kts for example, that was one of his biggest hurdles for him initially. But, like he does with everything, he worked at it and found solutions.”

The race down the Atlantic

Eric Bellion began the race with a lot of questions of himself, sailing at the rear of the fleet. CommeUnSeulHomme went a long way west to get across the Doldrums, where he met Romain Attanasio (Famille Mary-Etamine du Lys), who was to sail alongside him for a long time. They headed south together talking on the VHF.

Gradually, the skipper saw that his boat could do better than finish 22nd, but he wondered about his own ability. “It doesn't come naturally to me like it does for the experienced solo sailors. I'm trying to keep the brakes on, but the boat wants to speed up.”

Bellion took his race step by step, building confidence on the way down the Atlantic. His chance came west after he and five other skippers grouped together, holding back to allow a big storm to pass in front of them. When they emerged Bellion sailed steadily in the north of the group but built in confidence in the way he could sail his boat, finally deciding to sail it how he felt he wanted to and not trying just to follow the advice he has been given by Desjoyeaux, Goodchild and others. From that point he sailed faster and faster and was one of the quickest in the fleet mid December and in the Pacific.

Discovery of the southern ocean

Bellion tested various ways of trimming and got used to his boat. He was following in the wake of Arnaud Boissières, when in a strong gust, his boat was knocked down causing his rudder stock to break. There was a repair session for twelve hours, but in the end he was able to get back in the race, feeling much more confident. At Christmas, in order to avoid a big storm, Bellion slowed and encountered Alan Roura and Enda O'Coineen. He gradually stepped up the pace in the Pacific, and overtook the group formed by Fabrice Amedeo, Arnaud Boissières, Rich Wilson and Conrad Colman.

In ninth place at the Horn on 11th January – two days behind Nandor Fa and nineteen after Armel le Cléach – Bellion was enjoying himself. “I'm not the same man. There has been a radical change. The lows used to scare me, but now I love fighting them.”

Tiring climb back up the Atlantic

Bellion had to remove weed from his keel and avoid the horrible calms and deal with violent gusts, before facing the lows in the North Atlantic. “I am going through hell. This final part of the Vendée Globe is the toughest. I wasn't expecting that.”

During his final week, his engine refused to start and he had to save energy and repair his water-maker. He faced hellish conditions 48 hours from the finish with 70-knot winds. His mast track snapped off on CommeUnSeulHomme, forcing him to finish the race under reduced sail.

On the day of the start Eric Bellion declared: “One thing at a time. The exit from the harbour to start. I'm not aiming to win. We're going to try to enjoy ourselves.”

After ten days of racing: “I'm a bit special in this race. I'm not interested in the rankings. I'm sailing my own race. I enjoy every day out on the water. I'm feeling more and more confident. I hadn't imagined so much emotion at the start. It took me 5 or 6 days to get over that. This is my third solo race and it's a big one. I feel alone, but not like back on dry land. We're kept busy with our boats around the clock. This is the first time I have been alone for so long. I'm friends with Isabelle Autissier, who told me that the Vendée is one mile, then two, then three. I'm taking advantage of every day, as I know it could all end tomorrow.”

6th Dec – rudder damage: Éric Bellion informed his shore team at 1720 UTC that his starboard rudder had been seriously damaged. He had been sailing in heavy seas with winds averaging thirty knots. The boat was knocked down in a gust in excess of fifty knots. Due to the violence of the crash, the rudder stock twisted. The rudder blade is still joined to the boat, but cannot be used. He is heading for 47° (NE) under reduced sail to find calmer seas which he should reach late in the morning. That is when he intends to carry out repairs and fit his spare rudder.

8th Jan alongside Conrad Colman, moves up to ninth

11th Jan – 90 miles ahead of Conrad Colman: “I rounded Cape Horn for the first time 12 years ago,” Bellion said. “I was excited like a kid at Christmas, and it's the same again this time, but it's not the same when you're sailing solo. I know what Cape Horn looks like, but this time the approach to it is different. I can tell you that it's quite tricky here. I got hit by a 45-knot squall with some hail and huge waves. If the Vendée Globe is an Everest, it is the Horn that is at the top and the road to Les Sables d'Olonne is to be the descent to the base camp.”