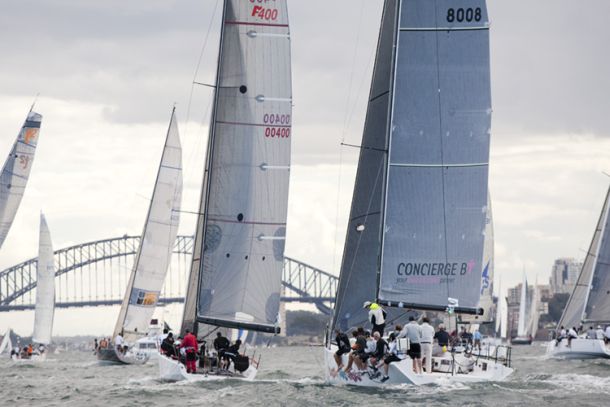 The fleet heads to the first mark. Credit David Brogan

Online entry is now open for the Land Rover Winter Series, which has been part of the Cruising Yacht Club of Australia’s sailing calendar since 1949. The series commences on Sunday 19 April with the traditional Great Veterans and Opening Ladies Day race.   Click here to enter now

Land Rover signed with the CYCA as a major sponsor in 2014, taking naming rights to the Land Rover Winter Series and Land Rover Sydney Gold Coast Yacht Race, signalling its commitment to sailing sponsorship in Australia.   However, Land Rover is not new to the sponsorship of sailing and has been a sponsor of the Clipper Round the World Race via the GREAT Britain yacht, and the Extreme Sailing Series internationally.

Every Sunday, from April to mid July, through rain, sun and at times fickle breezes, in excess of 140 yachts sail on Sydney Harbour creating a colourful backdrop to this iconic landscape.

This year, the series consists of ten pointscore races and a three-race Ladies Day series.    The Ladies Day Series consists of the opening race of the Land Rover Winter Series on 19 April, the race held on the June long weekend and the closing race on 12 July, just prior to the many yachts who will head north in the Land Rover Sydney Gold Coast Yacht Race (25 July 2015) and to other Queensland Regattas.

The Great Veteran’s Race is a non-spinnaker race and is the Cruising Yacht Club of Australia’s annual tribute to those classic Sydney Hobart Yacht race yachts that sailed south in the 1940s, 50s, 60s, 70s, and early 80’s.  Eligible veteran yachts that have competed in a Sydney Hobart Race and are over 30 years of age are invited to enter, with the winner having their name engraved on the historic Windward Trophy.

The Land Rover Winter Series pointscore starts on Sunday 26 April with ten races for spinnaker and non-spinnaker. The pointscore series consists of ten races, with up to three drops allowed, if all ten races are completed.

CYCA Commodore John Cameron encouraged yacht owners to participate in this great winter tradition. “I would like to encourage yachts owners to enter into this fantastic winter regatta. It is one of the longest ongoing series on Sydney Harbour and is sailed with a great spirit of camaraderie and competition”.

Weekly prizes are the highly sought after exclusive CYCA Land Rover Winter Series merchandise awarded to 1st, 2nd and 3rd placegetters in each division and Land Rover will provide the opportunity for one of the divisional winners to test drive a Range Rover Evoque for a week.

In addition, the Noakes Group is pleased to provide a Lift stand launch and two free layday prize for one lucky divisional winner each week.

The great tradition of The Breakfast Club continues once again with a band of passionate volunteers providing crews with a traditional BBQ breakfast before the day’s racing. All proceeds from Breakfast Club sales are used to purchase items for the club house to benefit members.

The Bistro is open every Sunday morning to serve breakfast and after-race snacks.  LEat also offers a variety of on-board catering which must be pre-ordered – email Alice at LEat for further information.

For more information on the Great Veteran’s Race and the Land Rover Winter Series visit www.cyca.com.au or phone the CYCA sailing office on 02 8292 7870 or email sailingoffice@cyca.com.au.