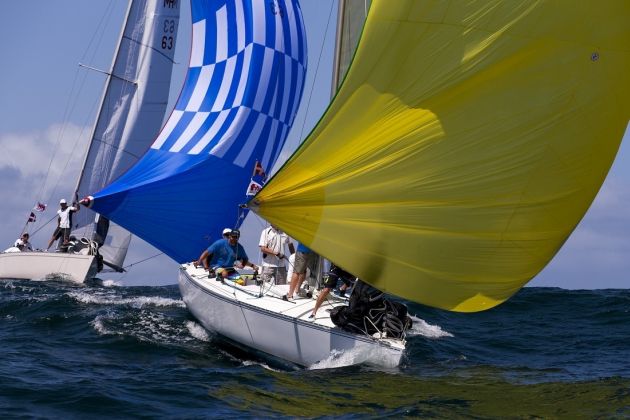 The 11th running of the regatta is nearly five weeks away, but strong interest is already being shown across the board for the autumn event that customarily closes the warm weather season.

With summer’s major regattas out of the way, the focus shifts to the 2016 Sydney Harbour Regatta, to take place over the weekend of 5-6 March. Already entries are flowing in across the 21 classes, including the many one-designs that have become a prominent feature of the regatta.

John Anet’s A31, Precision and Steven Proud’s Kernan 44 Swish, and Neil Padden’s Beneteau 40.7, Wailea are among the early entries in the grand prix IRC, where and ORCi classes, where many more are expected to try their luck, including last year’s winner, Patrice (Tony Kirby) and Andrew and Pauline Dally’s local contender, Khaleesi.

Mitchell Miller with Rock Solid and Rob Clarke with KicknChase were quick to enter their Adams 10’s. Bob Stoddard was first entry in the International 5.5m class with Skagerak, while local sailor, John Crawford was the first J24 with Innamincka.

Indications are good for a strong line-up in the J70 class, which came down to the wire last year, with Ray Entwistle’s Jedi prevailing over Tim Ryan’s (James) to be named new NSW champion. Stephen Brady’s YKnot is among the entries already received, while Melges 32 devotee, Kim Williams, was in early with Rock N’ Roll.

James Mackenzie’s Jaws was the first entry received in the former Olympic class Yngling. A top line-up is expected in this class that has spawned its share of world, national and state champions. Among them are reigning Sydney Harbour Regatta champion, Hamish Jarrett with Miss Pibb, and former winner and triple Olympian, Karyn Gojnich (Evie.

The popular Sports Boats will again provide the excitement of thrills and spills and James Dwyer and Jon Rowe were first to put their hands up with Emma Peel and Monkey Business respectively. The same can be said of the Performance Class (Super 30), where two Flying Tigers, Flying Brandy (Marco Tapia) and Ophir (Bruce Tavener) were first cabs off the rank.

Once again, the Cavalier 28’s will hold their NSW Championship at the Sydney Harbour Regatta, and defending champion, Craig Mitchell (Centaurus) will lead the charge and is to be joined by others such as John MacLeod and Cecil Williams’ Quambi and Joka.

A variety of boats usually sign on for the Performance (PHS) spinnaker and non-spinnaker classes. Boats as diverse as the Adrian Walters skippered Rob Shaw 11 Metre, Little Nico, and Terry Daly’s Mungral 25, Beware of the Dog, will provide plenty of colour and close competition on their course.

Of course, the replica Historical 18 footers will also add colour and a bit of nostalgia when the likes of new Australian champion, Aberdare (John Winning AM) and runner-up, Yendys (Harold Cudmore) take to the Harbour.

While the IRC classes will tackle multiple offshore windward/leeward races, the remaining classes will fill the Harbour from The Sound to Kirribilli, giving Principal Race Officer, Denis Thompson, a mammoth task to facilitate good racing and keep all on track.

Entries in the Sydney Harbour Regatta close at 2400 hours on Monday 22 February. Enter on line at: www.shr.mhyc.com.au/