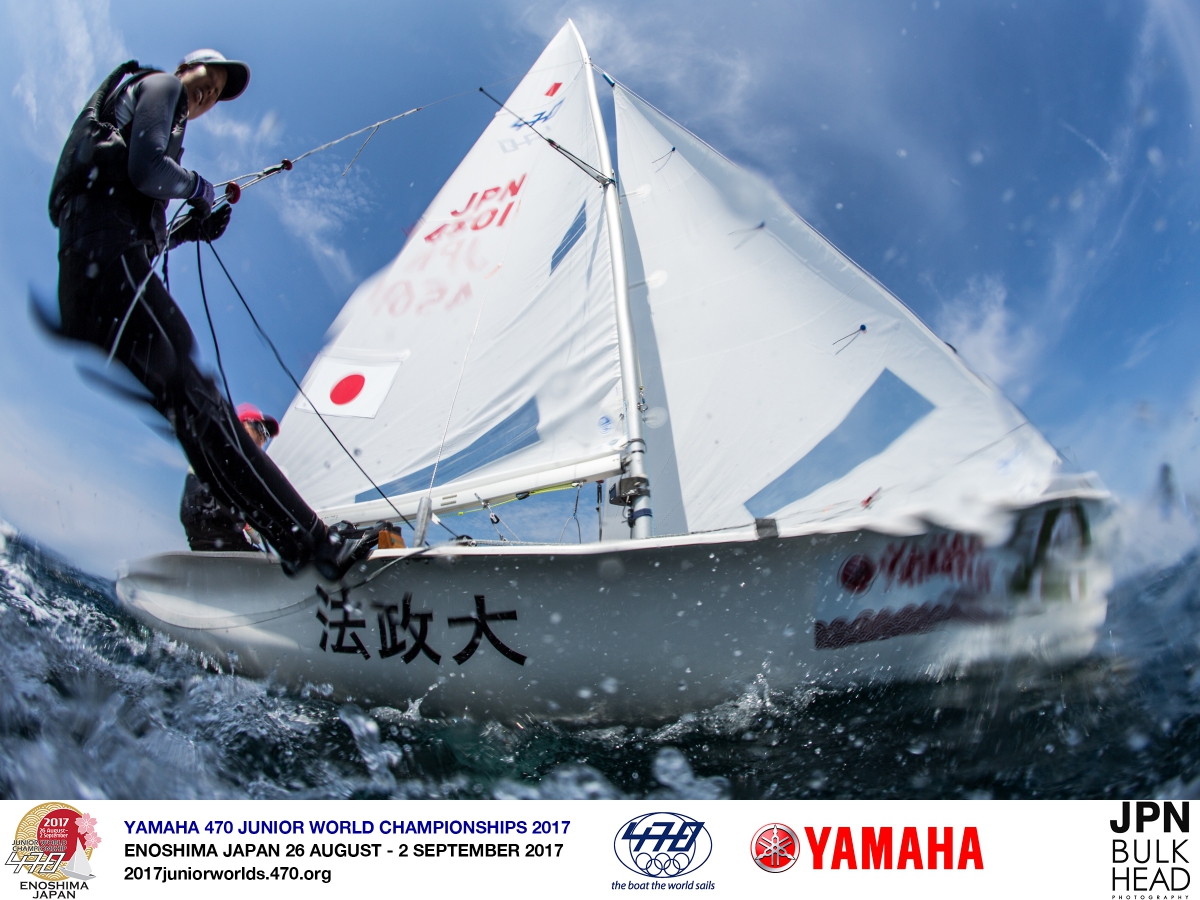 Reading the breeze was definitely a challenge for teams today, as the wind fluctuated in pressure and direction as light winds greeted teams for the opening day of the 2017 470 Junior World Championship in Enoshima, Japan.

Conditions were anything but typical, and a real contrast to the race track many of the teams experienced at last week’s All Japan 470 Nationals, with the current, shifts and pressure exceptionally hard to read. The mainly light seabreeze filled in from the south for the afternoon, also bringing with it an unusual current, which at times was hard to beat and needed smart decision making.

After racing, the Organizing Committee hosted a Kimono  party which saw sailors dressed in traditional Japanese dress, trying some Japanese dancing and enjoying a buffet of local specialities as well as sake, the national drink.

Three races are scheduled for both fleets on Tuesday 29 August, kicking off with the women at 1200 hours, then the men.

470 MEN
Hippolyte Machetti/Sidoine Dantes narrowly missed out on the gold medal a few weeks ago at the 470 Junior Europeans and came here intent on changing the record. The pair were today thwarted by former Junior World Champions and fellow-French team mates Guillaume Pirouelle/Valentin Sipan who racked up the win in the opening race, before Machetti/Dantes hit back to claim the race 2 win.

“The breeze was really tricky and we didn’t see anything on the water and we couldn’t read the shifts, so we had to deal with what we had at the moment,” explained Pirouelle on their day. “We did very well in the first race, and there was no wind on the right side and we tried to do our best speed which made all the difference.”

The Pirouelle/Sipan have taken time out of 470 racing over the summer, with Sipan tactician for the French team at the Red Bull Youth America’s Cup in Bermuda, and both racing in the Tour de France a Voile over the summer and finishing third.

“It’s great being back in the 470, and it is hard to be fast as we haven’t sailed a lot together, but we trained in France before coming and worked hard at the Japan Nationals. So we will do our best and see at the end,” concluded Pirouelle.

Despite their aversion to light winds, Japan’s top performers were Daichi Takayama/Naoya Kimura with scores of 3,6. “We are excited to race in an international fleet and I am really happy to have the Junior Worlds here and that everyone has come to Japan,” said Takayama. He won the last World Championship held on his home waters, the 2015 420 Class Worlds in Karatsu – so a repeat will not be far from his mind.

470 WOMEN
Marina Lefort/Lara Granier (FRA) finished 2nd at last year’s 470 Junior Worlds and second at the 470 Junior Europeans earlier this month, and opened with a win, before trading places with team mates Jennifer Poret/Camille Hautefaye who took the race 2 victory.

“I think we have a good team and all our sailors are very good,” was the simple summise from Granier on the day’s performance. Alongside the racing, the opportunity to experience Japan is a first for many and make an impact, as Granier continued, “I am really happy to be here in Japan. I think it is such a respectful culture and very different from European culture. I really love it and love everything about this country.”

“It was really hard to read the race track,” said Despares as she headed off to dress in a Kimono, “but that is sailing!”

“It is a really good experience to learn about Enoshima and the racing areas,” added Barcelo on the opportunity of racing at the Olympic venue in Enoshima, with Mas continuing, “It is exciting to see the venue and all the teams already here training, and the feeling is that everyone is looking forward to Tokyo 2020.”

Third to Beste Kaynakci/Simay Aslan, with Aslan commenting, “We averaged good results, and for the next days it can get better.”

New kids on the block are twin sisters Courtney Reynolds-Smith/Brianna Reynolds-Smith who had an eye opener of a day at their first ever 470 Championship. Coached by two-time 470 Olympian Paul Snow-Hansen, the partnership proved they have come a long way since stepping into a 470 at the start of this year, showing impressive potential with results of 24,8, pitching them to 2nd in the fleet at one point in race 2.

The leading Australians are Sophie McIntosh and Orla Mulholland-Patterson who are 12th, with Nia Jerwood and Monique de Vries in 16th, Dana Tavener and Katherine Shannon in 21st and sisters Carissa and Natalie Bridge in 24th.