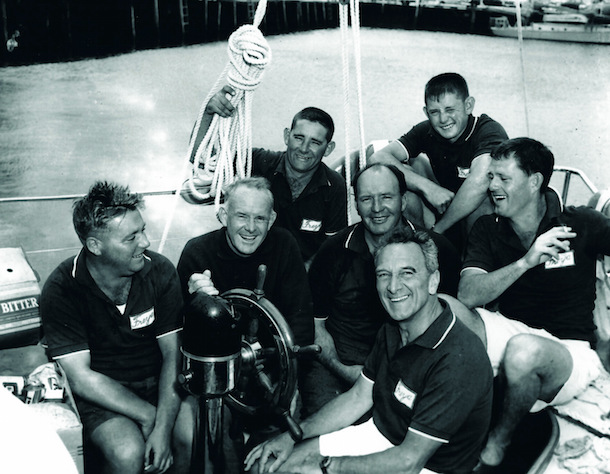 An extraordinary era in Australian yacht design, building and ocean racing came an end yesterday, 27 July 2015, with the death in Sydney of Magnus Halvorsen, just short of his 97th birthday.

The record set by Magnus and his brother Trygve (who died in November last year) in the Rolex Sydney Hobart Yacht Race may never be eclipsed. They won three consecutive races with Freya, in total achieving five firsts and five seconds in the 1950s and 1960s in Australia’s famous ocean race.

The Halvorsen brothers (five all told, plus two sisters) came from a line of Norwegian shipbuilders and sea captains on both sides of a family that went back five generations,  migrating with their parents and siblings to Australia in the 1920s.

All the sons were to make their mark on recreational boating in Australia, but it was Trygve and Magnus who have left such a legacy to ocean racing with superb yachts Solveig IV, Peer Gynt, Anitra V and Freya, the only yacht to win three consecutive Sydney Hobart Races on corrected time.

Trygve’s great talent was in design, Magnus’ in celestial navigation, a self-taught skill.  In fact, he once told me he learned the basics of celestial navigation by taking sighting of the sun and stars from the foreshores of Waikiki in Hawaii.  Magnus was a great seaman, too, a gentle giant of a man who could do everything at sea.

Both Magnus and Trygve contributed much to the Cruising Yacht Club of Australia ocean racing organization, becoming members in the early days of the Club.  The CYCA recognised the brothers by inviting them to be the official starting team of the Sydney Hobart in 2007, an honour which I shared with them that year and, sadly, was the last time I saw them together.

After the Halvorsen family’s arrival in Sydney, their father established a small boat-building enterprise on the Harbour but when he died at a relatively early age his sons took it over, with Magnus and Trygve subsequently becoming joint owners of the expanding business.

During World War II, the Halvorsen’s became an important part of the war effort, building many vessels for the Australian and US armed services, including the well-known Fairmile.

As wooden boat builders they carried on the traditions of their Norwegian forebears and their skills in this medium were displayed as the builders of their ocean racers but also the America’s Cup challengers Gretel and Gretel II.

Not only did they build the Alan Payne-designed Gretel for Sir Frank Packer’s 1962 Challenge for the America’s Cup, but both Trygve and Magnus were part of the team.  Later they built Gretel II for the 1970 challenge and re-bullt her for a later challenge in 1977.

Freya was the most famous, winning the Sydney Hobart in 1963, 1964 and 1965 as well as being a member of Australia’s first challenge for the Admiral’s Cup in England in which the team finished second.

Freya was a 38-foot 6 inch LOA double-ender with a vertical spade rudder and a long, straight keel, planked in Oregon and splined (wedge glued between the planks instead of caulking). She could carry full sail to windward in 30 knot and carry a shy spinnaker much longer than any of her competitors.

The transition from Solveig IV to Freya saw many innovative changes in hull shape, keels and rudders, and in yacht construction engineering.

The brothers also won four Trans-Tasman races between 1948 and 1961 with Peer Gynt, Solveig and Norla and also competed in the TransAtlantic Race.

After sharing the 1966 Australian Yachtsman of the Year honour, Trygve and Magnus went their separate ways in yachting; Trygve sailing in several more Hobarts, while Magnus navigated the American maxi yacht Kialoa III when she set a long-standing Sydney Hobart race record in 1975.

Magnus also navigated Peter Kurts’ Love and War at the Admiral’s Cup and in the 1974 Sydney Hobart.  Crew mate Peter Shipway recalled how, when I met them coming up the Derwent, he yelled out “what time did Bumblebee 3 finish?”  When I told them, Kurts and his crew knew they were close to victory.  It was an incident I included in my report on the race for Modern Boating magazine, which I then edited.

Peter said his one great memory of Magnus in this race was when Love and War was crossing Bass Strait in a vigorous westerly his very strong message was “don’t get jammed on the Tassie coast”, meaning don’t get an early landfall.

“This is exactly what happened to Bumblebee 3 if you remember,” Peter recalled. “She was the red hot favourite but closed the coast too early, got becalmed and we were roaring along about 50 miles east of Freycinet still in a strong westerly…no doubt that he won that race for us.”

Trygve and Magnus Halvorsen last got together to be the official starters of the Sydney Hobart in 2007 and again in 2012 when a small group of yachtsmen attended a lunch at the Royal Sydney Yacht Squadron to mark 50 years since Australia’s first challenge for the America’s Cup with Gretel in 1962.

Trygve passed away on 8 November 2014 at the age of 94 and with the death yesterday,  27 July 2015 of Magnus at the age of near 97,  a remarkable combination has ended:  Australia’s most successful yacht designers, buildings and ocean racing sailors of the 1950s and 1960.

Whenever old salts get together to talk about ocean racing, Magnus and Trygve will be remembered in awe!  Sadly, there were few yachties at the memorial service for Magnus Halvorsen.  Love and War crew Mike Hesse, John Harris and Peter Shipway were there, as were two of the original crew of Gretel in Dick Sargeant and Rob Thornton.