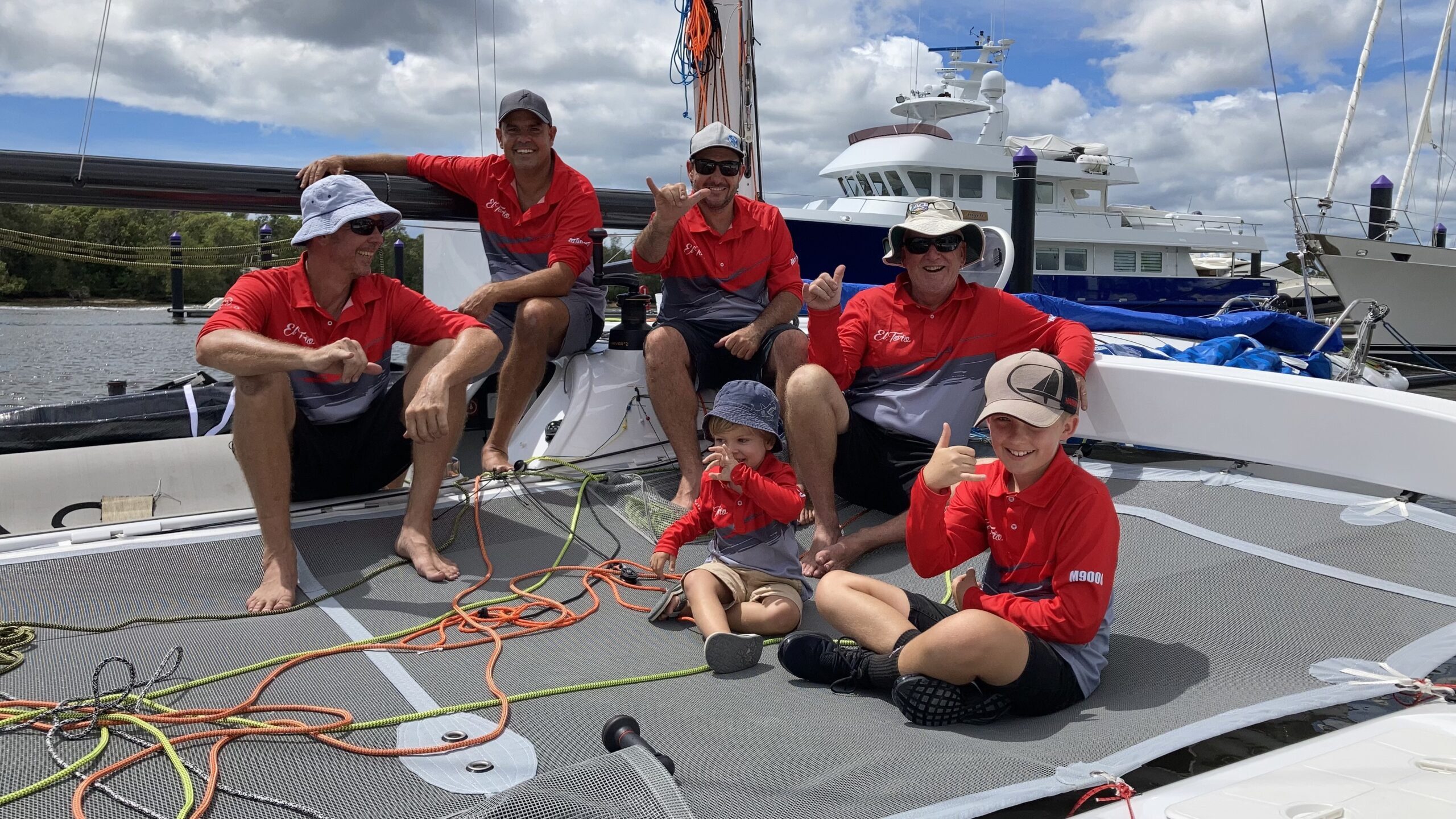 Sleek and razor sharp, the nine metre trimaran, El Toro is a labour of love, brought to life by some of the Australia’s top talent and has undergone her commissioning at The Boat Works on the Gold Coast.

Led by Ben Kelly, Asia Pacific multihull specialist from North Sails, the project has taken the team over seven years, as he explained.

“I used to race The Boat Works Extreme 40 with Julian Griffiths from Noosa Marine, and since then, a group of sailing mates and I have been building our dream racing trimaran.

“We designed and built the boat ourselves with a team of four owners including two boatbuilders, a painter and me in charge of sails and rigging. It’s taken us six years of weekends to build, no paid labour just ourselves in a shed at Tweed Heads. We have been very grateful for industry support and there is a wide range of hardware brands on show in the boat’s fit out.”

The design was completed by co-owner and boat builder, Aaron Carle and Ben, with the design name Cassius 9m – a tribute to Aaron and his wife Julie’s son Cassius, who tragically passed away during the build process.

Boat Builder Doug Fuller, well known on the Queensland multihull scene, brought a wealth of knowledge and wisdom to the team. Painter and now almost a boatbuilder himself after six years of experience, Russell Kerr achieved a fantastic finish on the vessel after many hours of fairing and painting.

The sails are all North Sails and a mix of panelled and 3di technology.

“The concept was for a fast upwind platform that is wide and stiff and can handle the sails power,” Ben continued. “The boat is to be as simple as possible and easy to sail. We also had to use build processes we could achieve on our own.

“The vessel is an 80 percent epoxy glass build with the boards, mast, boom, beams and extra reinforcement all done in Carbon Fibre. We took our design cues from many successful Trimarans globally, such as the awesome French boats.”

Naming the beast was as drawn out as the build. Ben admits he spent most of the six years dreaming up names, and it wasn’t until the day the platform was first bolted together and all four of them were standing back admiring their work when one noticed the self-tacking jib track’s resemblance to bull horns.

“Then somebody else said ‘El Toro’, and I said that sounds like a good name. We all agreed on the spot.”

After sailing Extreme 40s for several years, Ben admits El Toro will not achieve that level of performance, but he is confident they will be successful in their own class.

“We will race to a rating rule called OMR and the boat has been tailored to achieve results in this fleet of racing. We hope to have many years of fun racing and ultimately try to achieve winning a national title along the way.”

At The Boat Works, El Toro is enjoying the finishing touches, including final coats of Jotun paint, supplied by Marine Trade Supplies & Chandlery onsite, and all the accessories.

“We have relied on many of the trades at The Boat Works over the past seven years. Most importantly, it’s the best location for works and as a launch space for our team,” said Ben. “I enjoyed being part of owner, Tony Longhurst Extreme 40 race crew for years and I have been coming through the gates at least once a week in my job as a sailmaker ever since. All my clients always rave about how great the experience, the staff and amenities are. Finally, after many years building this boat, we also get to sample this for ourselves and it is the perfect ending to a long and hard build process.

“The facilities at The Boat Works worked perfectly as a centralised destination for the launch. Post-launch, our crew, family and friends enjoyed a celebration at the new Boat Works restaurant, Kokomo Kitchen & Bar overlooking El Toro on the superyacht basin.

“Such a real milestone for us; putting together the pieces we have built over the past seven years and then lifting her in the water for the first time. It was a proud moment for all of us.”

Now, looking ahead to competition season, Ben is keen to test their mettle in the Queensland Multihull Championships regatta in April at Royal Queensland Yacht Squadron.

“From there we would like to do the Bay to Bay, Surf to City and a couple of other events on the east coast.

“The other key aim is for the boat to be able to just go out for fun and weekend overnighters in the bay for family and friends to enjoy. My 12-year-old son, Luca has been waiting half his life for this boat to be finished so it will be incredibly rewarding to share some of these experiences with him.”

About The Boat Works:

Australia’s cleanest, greenest shipyard and marina facility founded in 1980s has recently expanded with the only purpose-built New Superyacht Yard complimenting the already resort like boatyard.

At 55 acres (21.8 hectares) The Boat Works is the largest Shipyard & Marina facility in the Southern Hemisphere. With two complimenting Yards featuring Gold Coast’s largest boat hoist at 300 tonnes the North Yard facilitates the white boat – Superyacht 50m vessels with the expansive Southern Yard featuring the Catamaran specific hydraulic Sealift, 70 and 100 tonne lifts. The facilities operate at full capacity, with a haul out rate of 50 vessels out-of-water per week, 80+ marine trade professionals, onsite chandlery superstore all set within the epicentre of the Gold Coast’s Marine Precinct.

The Boat Works is a ‘one stop shop’ for all boating requirements and is the ideal pit stop destination.