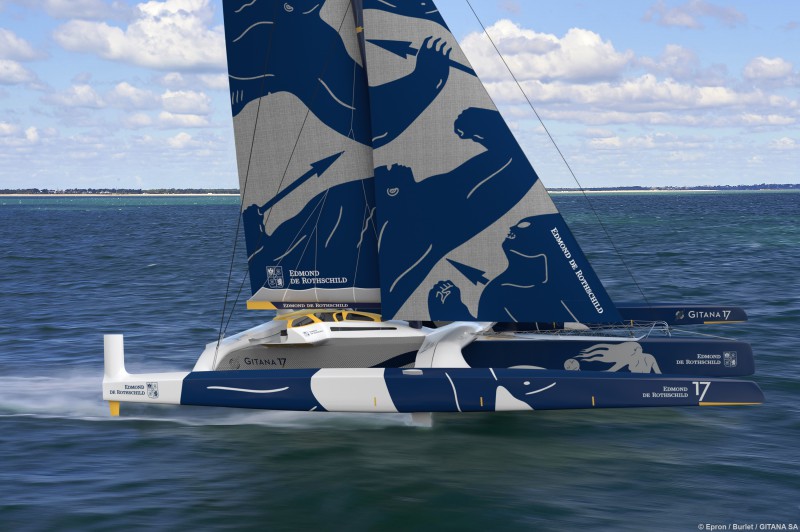 On Thursday, the Gitana Team invited the press to the Palais de Tokyo museum in Paris to mark the official launch of the Maxi Edmond de Rothschild, a ‘giant’ measuring 32 metres long and 23 metres wide, which is undergoing her final few months in the yard after a build process spanning over a year and a half. The launch of this new Gitana craft is scheduled for this July. We get the low-down on the general concept, highlighting the forms and the architectural choices, with a focus on the special features of the platform, not to the mention the announcement about the sports programme, as well as the discovery of the livery… Sébastien Josse and his team were careful not to dodge any questions, aside from those relating to the appendages; a highly strategic point given the team’s clear aim of building and developing a flying offshore maxi-trimaran.

A new type of Maxi
A new chapter in the history of offshore racing is very likely being written. Who could have wagered just ten years ago that a 32-metre long and 23-metre wide multihull would be capable of flying around the world driven by just one skipper? And yet, this is the gamble accepted by Ariane and Benjamin de Rothschild and the members of Gitana Team, their offshore racing stable founded in 2000.

This ‘Ultime’, which has fully adopted a long-term approach with the team involved in extensive research and development on the Multi70 Edmond de Rothschild since 2014, once again testifies to the passion for innovation and performance that guides the owners of Gitana on a daily basis. Designed by naval architect Guillaume Verdier and his team in collaboration with the Gitana design office, the Maxi Edmond de Rothschild is paving the way forward for a new generation of large offshore multihulls. Indeed, it will be part Archimedean boat (submerged hull), part flying craft.

Beyond her majestic platform, which is an imposing sight from the first visit to the Multiplast yard in Vannes, the boat features purposeful planing hulls beneath the waterline that are both aggressive and innovative and a far cry from those used on the current fleet of oceanic multihulls. Everything about the forms of the floats and the central hull shouts flight. With this in mind, she will be equipped with the very latest architectural and technical advances in terms of appendages, with T-foil rudders and L-shaped foils, which are sure to set tongues wagging, though Gitana Team does not intend to unveil them prior to the boat’s launch. With everything geared towards flight, a great deal of care has gone into the aerodynamics of the platform. The forms of the beams in particular testify to this, as does the integration of the living space/ cockpit between the two beams.

First official competition in November
The broad outline of the sports programme for the Maxi Edmond de Rothschild has already been established for the next three seasons. Christened Gitana 17, she has been devised, developed and built with the focus on solo sailing, though she will also be the ideal boat for crewed races as well as the major records.

Entrusted to the expert hands of Sébastien Josse, the skipper of the Edmond de Rothschild craft since 2011, the first official competition for the Maxi will take place this November for the famous double-handed transatlantic race, the Transat Jacques Vabre between Le Havre and Salvador de Bahia, in Brazil. For this trial run, Sébastien Josse will be accompanied by the navigator Thomas Rouxel. Hailing from the Figaro network of excellence, the Breton sailor is one of the loyal members of the sailing team on the Edmond de Rothschild craft and boasts a wealth of offshore experience that notably includes a Volvo Ocean Race and a Jules Verne Trophy. The Route du Rhum 2018 and a solo round the world in the autumn of 2019 will round off this programme, which is as thrilling as it is demanding.

When Art takes to the open sea
Though the Maxi Edmond de Rothschild has proven to be innovative in both her design and her realisation, this is as much the case for her livery. The latter is the fruit of a fantastic collaboration between the Gitana Team and the Palais de Tokyo, spurred on by Ariane de Rothschild.

To sublimate and support this new atypical project, the owners of Gitana were keen to entrust an artist with the ‘visual personality’ of this craft with her extraordinary dimensions. Thanks to the commitment and dynamism of its president Jean de Loisy, the Palais de Tokyo is embarking on the adventure and the Maxi Edmond de Rothschild is joining one of the Palais’ artistic programmes, which goes by the name of the “LASCO PROJECT”. This urban arts circuit, which has embraced the subterranean sections of the famous Parisian museum since December 2012, has played host to a succession of exhibits from over sixty international artists: from Futura to Cleon Peterson, to Mode 2, Boris Tellegen, Olivier Kosta-Théfaine, Stelios Faitakis, André, Jacques Villeglé, Dran, SKKI, Evol, Vhils, Azyle, Antwan Horfee, Ken Sortais, Lek & Sowat, O’clock, Pablo Tomek, Philippe Baudelocque, Craig Costello, as well as JR and the OSGEMEOS. However, with this particular project, it is escaping the confines of its walls so as to be transported to the sea for the very first time.

It is the American artist Cleon Peterson who has been selected. For this latest remit, he has specially designed an original work that Jean-Baptiste Epron, Gitana Team’s loyal designer, has adapted to the silhouette of the Maxi Edmond de Rothschild. It is a committed creation, which is perfectly in harmony with the character and sleek lines of this new generation ‘giant’. Through this invitation, the painting by Cleon Peterson is taking to the open water where it will confront the ‘other-urban’ territory that is the sea. The American artist brings his painting to life through the stormy nature of the ocean, reminding us that art and sailing pursue the same mirage: the crossing of fringes like horizons.