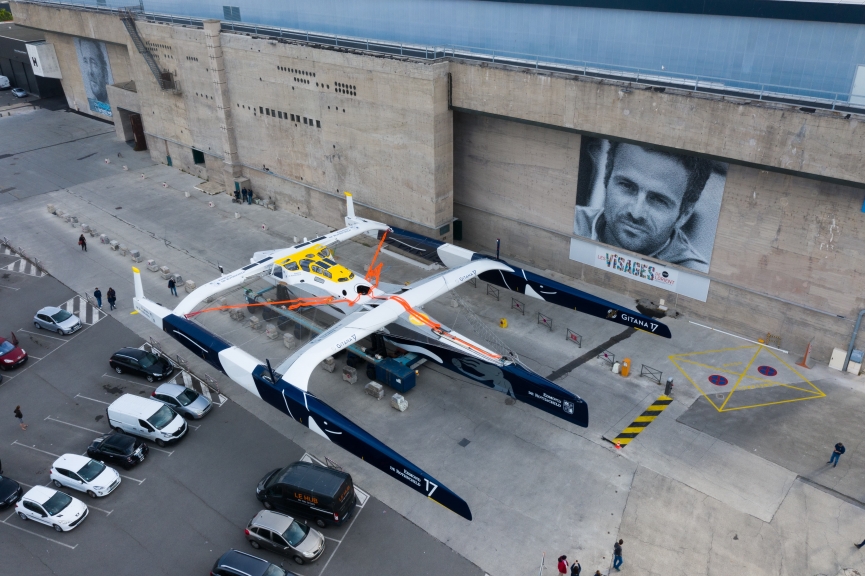 There is no doubt that the large offshore multihull season is up and running! Following on from Actual Leader last week, Macif yesterday, today was the turn for the Maxi Edmond de Rothschild to return to the ocean this at her Lorient base. Following a six-month refit, focused on the repair of the starboard bow section lost during the Route du Rhum, together with the optimisation of the giant 32-metre platform, the team was keen to see the latest addition to the Gitana fleet back on an even keel.

Charles Caudrelier, one of two new team skippers, had a ringside seat to witness proceedings; always a very emotional moment. Meantime, Franck Cammas monitored this return to the water remotely as he’s lining up today for the first of GC32 Racing Tour season event. Both sailors will be reunited next week for some sailing at their team base host port.

On 5 November 2018, after around ten hours at sea and a stunning start to the race, the Maxi Edmond de Rothschild suffered serious damage following the loss of the trimaran’s starboard bow. Sébastien Josse’s race came to an abrupt halt.

On 21 November, there was a major recovery operation for the maxi missing 10-metres of flat and she made it back to her technical base in Lorient, Brittany. Six months later, after a long and tricky rebuild, Gitana 17 is back on the pontoons, with two new skippers at her helm who are itching to discover their steed.

“Six months is a long time, but that’s how long we needed to make another float mould, have the part manufactured at Multiplast, bond it to the platform and paint the whole thing. We only had a month for this entire last bonding element and the finishing touches, and it wasn’t a day too long!” according to Pierre Tissier, the team’s Technical Director.

Sébastien Sainson, head of the in-house design office gave us the low-down on the method applied throughout the studious winter refit: “Our main difficulty was having to carry out a series of investigations to understand what led to the damage, at the same time as getting started as quickly as possible with the rebuild. To achieve this, we worked closely with Guillaume Verdier and his teams. It was a long, painstaking job requiring the utmost precision! Everything was reviewed, from the health of the material to the implementation of the original plans. Using the various materials available to use and notably the data from the on-board inertial unit, we managed to come up with the most convincing hypothesis, revise the structural and fluid calculations and then opt for reinforcements accordingly.”

The new bow section and the structural reinforcements made to the other two bows naturally required scrupulous attention and all our know-how, but the five-arrow team also made the most of the winter months to continue the development and optimisation of the Maxi. In this way, to benefit the ergonomics and aerodynamics, the cuddy was cut away and revised. In line with their reputation as honed technicians and performers, the two new skippers have already got together with the various members of the Team and considered some new avenues for improvement. Aerodynamics will be at the top of the list once again this summer to make further gains in terms of performance.

The recently named skipper pairing will really have their work cut out in the coming weeks. Indeed, Franck Cammas and Charles Caudrelier will have to quickly get their bearings and tame what is a complex and demanding machine. This Tuesday, the duo will go out for a series of sessions out on the water, in crewed configuration initially, with the aim of participating in the legendary Rolex Fastnet Race, then double-handed to prepare for the great sports clash which awaits them on 3 November 2019. The latter event goes by the name Brest Atlantiques, a 14,000-mile triangular course setting sail from and finishing in the metropolis of Brest in north-west Brittany, via Rio de Janeiro and Cape Town in South Africa. This first trial run will be a fantastic test both for the Maxi Edmond de Rothschild and the skippers, who will set sail double-handed for nearly a month at sea accompanied by an on-board reporter.

“This launch is a first achievement. Since Franck and I joined the team, we’ve made a lot of observations about the boat in terms of the numbers, both on the plans and digitally. Now, we’re keen to get out sailing on her and feeling what she’s all about. This discovery phase is inevitably exhilarating. The team has proven that it’s made a good, seaworthy boat and now it’s down to us to make it all sing. The Brest Atlantiques race is at the forefront of our thoughts and our preparation has begun. We hope to get in as much sailing as possible, aware that these are complex boats that require fine-tuning. The slightest little issue can take time to resolve but the team has done a fantastic job this winter. The Maxi has been sailing for two years now, she’s been made more reliable and despite the major structural issue she had in the Route du Rhum, all the peripheral systems are working very well. As such, we hope we’ve turned a corner now so we can focus more on the sailing, which is a great opportunity”, said a delighted Charles Caudrelier, skipper of Edmond de Rothschild.

Following the damage suffered in the Route du Rhum, the owners of Gitana were very clear about the fact that they wanted to be present for the 2019 season, which meant that the team had to adhere to a very tight schedule given the scale of the task in hand.

Cyril Dardashti, who has managed the racing stable for the past ten years, is all too aware of the effort and commitment required for such a refit both on a collective level and individually: “It’s the first time we’ve done work like this in our yard in Lorient and it’s a source of great pride for the whole team that we’ve managed to pull it off. It was ambitious as there were tight deadlines and it was a complex bonding operation. However, the team, and notably the composite specialists, all stepped up to the plate despite their understandable disappointment about the breakage and our retirement from the race. Hats off to everyone.

“Of course, my mind turns here to our owners and the Edmond de Rothschild Group, who are continuing to support us. I sincerely hope that we can quickly thank them for their patience in the best possible manner. From the moment we managed to come up with the explanation for our breakage, a whole series of things clicked into place and we’re fired up again like never before. I think you have to take inspiration from failure. We’re up and rolling again now so we can write a whole new chapter.”

“The loss of the bow section raised a lot of questions… This damage was a real knock-back for everyone, but despite all that, we’ve managed to stay on track and keep in line with our objectives. I think that by rebuilding the boat, we’ve rebuilt ourselves too!” concluded Pierre Tissier.