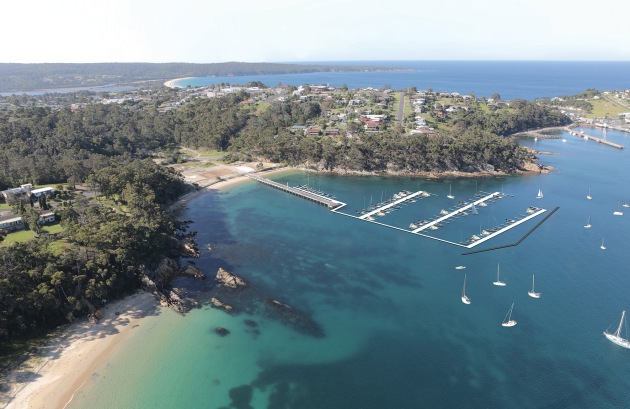 An artist's impression of the proposed Cattle Bay marina development at Eden on the NSW south coast.

The developers behind the proposed Eden Marina at Cattle Bay in Eden on the NSW south coast have announced that, following a recent judgement by the NSW Land and Environment Court, the marina has now been granted Development Approval (DA).

Spokesperson for the project, Bob Carter, said that with DA now finalised and an application made for a Construction Certificate, the project is ready to commence and now only requires NSW Government support for a wave attenuator in order to proceed.

The installation of a wave attenuator to protect the marina from Eden’s exposure to south-west gales has been a sticking point for the Cattle Bay project. The developers are seeking $8 million in government funding to build an attenuator for the marina. The NSW Government, however, has thrown its support behind the construction of a $10 million attenuator for an adjacent marina development in the neighbouring Snug Cove. The construction of the attenuator for the Port of Eden Marina is expected to go to tender later this year although the design has yet to be finalised.

In the meantime, the Cattle Bay developers are pushing ahead with the Eden Marina project, arguing that with the “timely approval of Government funding” boats could be entering the new marina in late 2019.

“The developers are ready to go and commence works on the marina once the NSW Government steps up and provides the essential infrastructure,” said Bob Carter.

“Our specialist marina consultant Michael Jarvin has been to Tasmania to inspect the exact wave attenuator specified for Cattle Bay. The contractor, Tasmarine Construction, has their marina construction rig currently at Port Welshpool and they’re ready to go and start work at Cattle Bay.

“Eden Marina at Cattle Bay is a significant project which will deliver great economic, social and tourism benefits to regional NSW. It will also provide all of the maritime safety needs in Eden, specifically, a safe haven for passing vessels and a protected marina for local boaters.

The Boating Industry Association has thrown its support behind the Cattle Bay project. BIA president Alan Blake commented that the Eden Marina is a desperately sought development.

“Boating facilities on the Sapphire Coast are extremely limited,” he said. “This is just as much a safety issue as well as an opportunity to provide boaters on the Sapphire Coast with a world class, safe marina at Cattle Bay. There is an urgent and critical need to provide a safe haven for boaters sailing in Bass Strait, plus strong consumer demand for this marina to be built.”

“It is time for action and time for the NSW Government to commit and allocate the funds for the wave attenuator to be built at Cattle Bay,” he added.