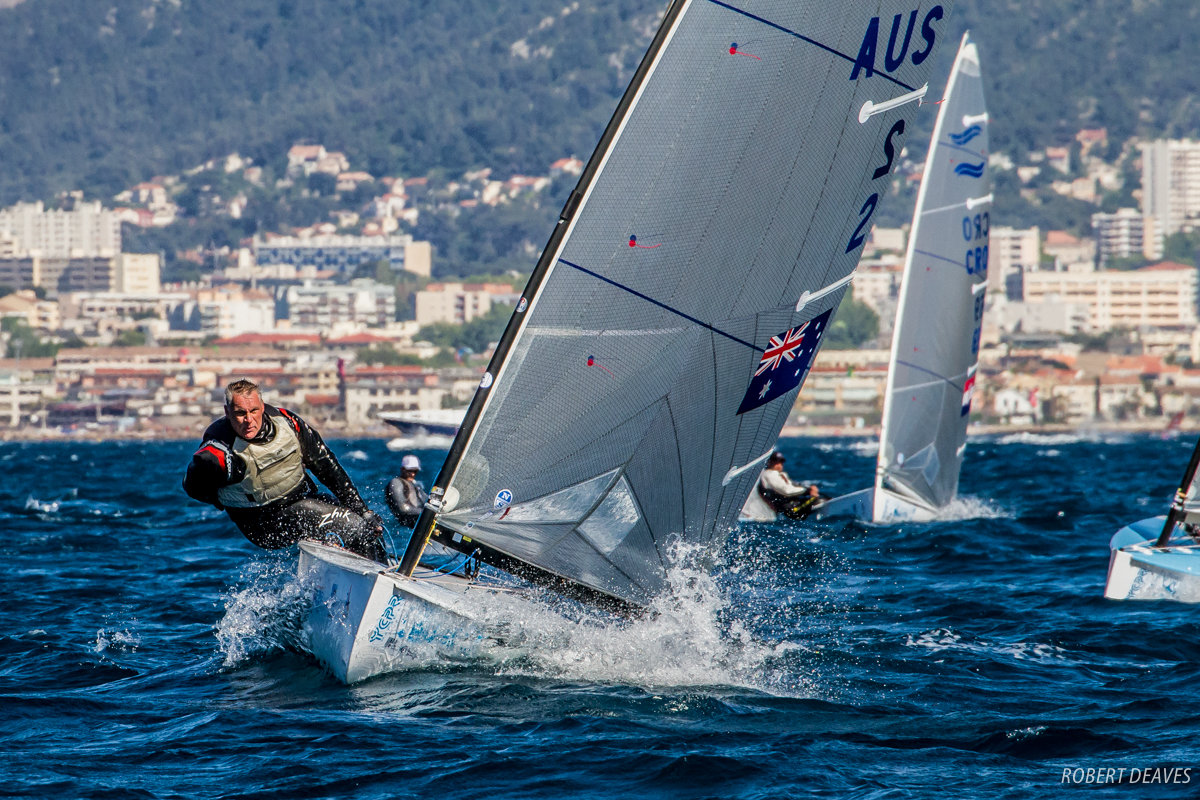 Ed Wright from Great Britain has opened the 2017 Finn European Championship with two emphatic race wins after a strong mistral kept the fleet on shore for most of the day. France’s Jonathan Lobert was consistent with two fourth places to sit in second, while two fifth places for Anders Pedersen of Norway leaves him in third overnight.

After the practice race was abandoned yesterday, the mistral was still in place for the first full day of racing and though the early indication was that racing would start on time, this was soon rethought as gusts of 37 knots and a very steep sea was recorded on the race area. So the fleet sat on shore under AP under mid afternoon, when finally the wild wind abated slightly, but enough to get some racing underway, though the wind was still topping out at 30 knots.

Each race started with one general recall and then the black flag. The race was really one of two halves: in the starting area big waves and 25 knot winds; at the top mark, 10 knots, flat water and 60 degree shifts, with the windward mark set a few hundred metres of the high ground of L'île de Pomègues.

The first race was initially led by class veteran Rob McMillan, now of Australia, who had a 30 second lead round the top mark. However his training partner, Wright, had taken the lead on the second upwind to extend down the reaches for his first win of the day, followed by Hungarian Zsombor Berecz and Ben Cornish of Great Britain.

The second race was much the same with the strong winds at the start line giving way to huge random shifts the further the fleet progressed up the course. This time Wright led all the way round, to win from Sweden’s Max Salminen and the young Nenad Bugarin from Croatia.

The fleet finally came ashore after 19.00, exhausted, but happy after an awesome day of Finn sailing.

McMillan has made various comebacks over the years, but after shocking a few people in Hyères last week, was stoked at leading round the first mark today.

“I had a really good day. First start was pretty average but I managed to drop into the shifts quite nicely and I had really good speed upwind and was about 30 seconds ahead at the top mark, which was very pleasant. That was a highlight for me.

“It was a lot of fun and really crazy with the wind shifts. Completely random and in a way quite frightening at times. It was so windy you never really knew what was going to happen next, but what a great performance by Ed today and great to see after all the training we have done together that we can both sail upwind very nicely. But I must clearly work on my downwinds.”

On yet another comeback, at the age of 51, “I will keep coming back as long as I am competitive. I am actually sailing better than I have done for many years, I haven’t really featured since the 1998 Europeans, I took ten years out and really only came back in 2008 for fun. I got a bit more serious in 2011, but I just love training with the guys in Australia. I love Finn sailing; it gives me a reason to stay fit and I will keep racing at this level all the while I am not coming last.”

Salminen commented on his day, “We were just to leeward of this really high island so the wind was shattered all over the place and was really gusty and you had to be on your toes not to get caught. And downwind you had big swells coming into the bay and this short chop that had been building all day. So really tricky to keep the mast upright.”

“I like it when it is this marginal as I am good at keeping the mast pointing upwards.”

On his day, “In the first race I was a little bit behind at the start and was fighting my way through. In the next I was second behind Ed.”

Wright, “We were sailing right underneath an island and it was pretty shifty at the top, so very difficult sailing. But great fun.”

“I got two first today, so I can’t complain. Really thoroughly enjoyable.”

“The biggest challenge today was just to keep the mast upright. Especially on the downwind, the gusts would hit you so hard and from nowhere.”

“Upwind it was not full hiking, as you had to control the boat, but in the Finn in these conditions, when you just get the bow out of the water and start trucking along it’s just awesome sailing upwind, and downwind.”

Racing in the opening series continues until Saturday, with the Semi-final and Final scheduled for Saturday afternoon.