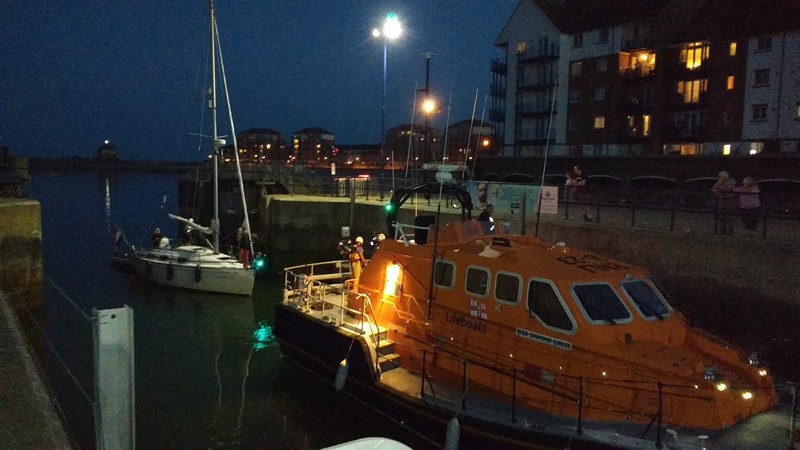 Monday (6 Aug) proved to be a long and arduous day for the volunteer crew of Eastbourne lifeboats, starting at 08.30 and finishing with a dash 26 miles offshore to rescue a stranded yacht finally returning to station early on Tuesday morning.

The inshore lifeboat (ILB) was launched at 08.30 to assist police and coastguards with the search for a missing person. Whilst returning to station with nothing found, they were re-tasked to Bexhill to help recover a dog which had swum out to sea and was refusing to return to its distressed owner. The ILB was stood down when the animal decided his morning swim had finished and it returned to shore unassisted.

At 19.54 the ILB was requested to launch again when a yacht got caught in fishing gear whilst approaching Sovereign Harbour. Fearing the casualty vessel could drift over the wreck of the Barnhill the all-weather lifeboat was launched to assist. The yacht was eventually freed and towed into harbour.

At 23.00 a distress call was received by HM Coastguard from a 26ft yacht with two persons on board which had lost propulsion 26 miles offshore and was drifting helplessly between the busy shipping lanes of the English Channel. The vessel was taken under tow and the long process of returning to harbour began, finally arriving in the safety of Sovereign Harbour at 04.00.

The lifeboat crew then tried to grab a few hours sleep before setting out for their day jobs.