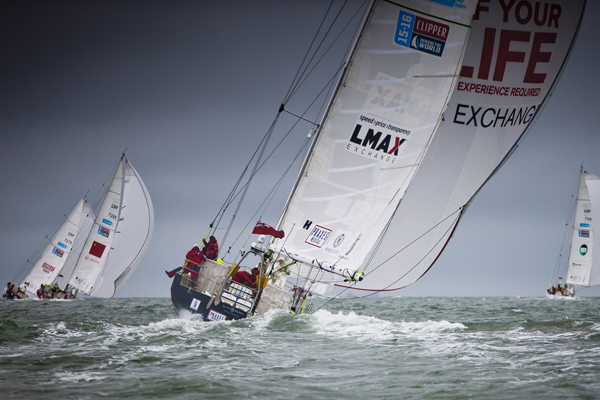 The Clipper fleet racing off the coast of England. Photo Clipper Ventures.

Day 1 proved to be a totally thrilling first day of close-hauled racing with a jostling of positions and leads as the fleet raced along the south east coast of England, making for addictive Race Viewer action from the off.

After flying first over the line ahead of GREAT Britain, LMAX Exchange lost its spinnaker early, allowing Derry~Londonderry~Doire to take the early lead until the turn at Margate, whereupon GREAT Britain took it on the inside with an early gybe. It held this lead until Dover where Qingdao’s decision to take a closer inshore route edged itself into a short-lived lead. After another unplanned spinnaker drop which plunged it into eighth place, the LMAX Exchange team righted the problem and strived to hunt down the pack. A successful comeback complete, the team is currently leading by just over 0.1NM as of 0900 UTC.

LMAX Exchange skipper Olivier Cardin explains: “Just after the start it was like a dream, we were making good speed, and the team was just focused on trimming, but after 30 minutes the tack-line (line which maintains the spinnaker at the bow) slipped from the winch. We had to drop the spinnaker, but managed to do that very quickly. We then hoisted the Yankee 1 and prepared the Code 3 spinnaker, a smaller one, ready to hoist. With the Code 3 spinnaker up, we were still in fifth place.

“And 45 minutes later, there was another mistake: We dumped the spinnaker halyard instead of the vang. Another crash drop with all the team trying to recover the kite; followed by another Yankee hoist and kite preparation. With the Code 1 up, we were then in eighth place.

“After a debrief with the team about the incidents, we all decided to make a comeback. We all know our capability to be fast! So, at Ramsgate we were sixth, with Visit Seattle and Ichorcoal behind. At 2000, we said bye bye to Mission Performance. And at midnight we took the lead after huge reactivity from the team who hoisted the spinnaker first. Since then, we have been fighting against GREAT Britain and Qingdao on a long run across the English Channel.”

GREAT Britain skipper Pete Thornton, currently hot on the heels of the leaders in second place, provides his thoughts on the closely contested race. “Just 18 hours into Race 1 and if the racing all the way down to Rio is as tight as it has been up until now, I'll be a tad crazy.

“Having had Derry~Londonderry~Doire lead round the first mark, to us leading at the second only to have Qingdao overtake us on the inside round Dover and then LMAX Exchange sneak up under spinnaker post sunset while we were trying to keep it safe and easy around the western end of the Dover Traffic Separation Scheme (TSS).

“This forced our hand into another quick asymmetric spinnaker hoist in the dark drizzily night. After which we managed to claw back some time on LMAX Exchange in the early hours. However at that point Qingdao made a move south and all three of us have been pretty neck and neck trucking down towards the Channel Islands at around 11 knots average into this grey daybreak.

“Now it will be interesting as I've sacrificed speed to stay north, allowing Qingdao and LMAX Exchange to move slightly ahead, but further south, which might cause them problems getting round the north west side of the Channel Islands.”

Mission Performance skipper Greg Miller, currently in twelfth place, details this point and the rest of the fleet’s decision to stay north, as he says: “Our next turning point is north of the Casquets Traffic Separation Scheme (TSS) which is north of Alderney in the Channel Islands. When we get there, there will be a foul tide trying to push us back if we went south of it, so we have decided to go north where the tide will still be against us but will be considerably less.

“It looks from the positions that most of the fleet have decided the same tactics, so that is a good thing and a great sanity check!”

Clipper Race Meteorologist Simon Rowell forecasts the upcoming conditions the fleet will face. “These current north/north westerly winds should persist through Biscay, but the strength will vary greatly depending where teams are across the track. The acceleration around Cape Finisterre due to a localised gradient between the Iberian heat low and the North Atlantic High should be there, probably giving moderate to strong north/north east winds.”

With less than 30NM separating the entire fleet, the race to Rio could still be anyone’s.

All standings correct as of 0900 UTC.