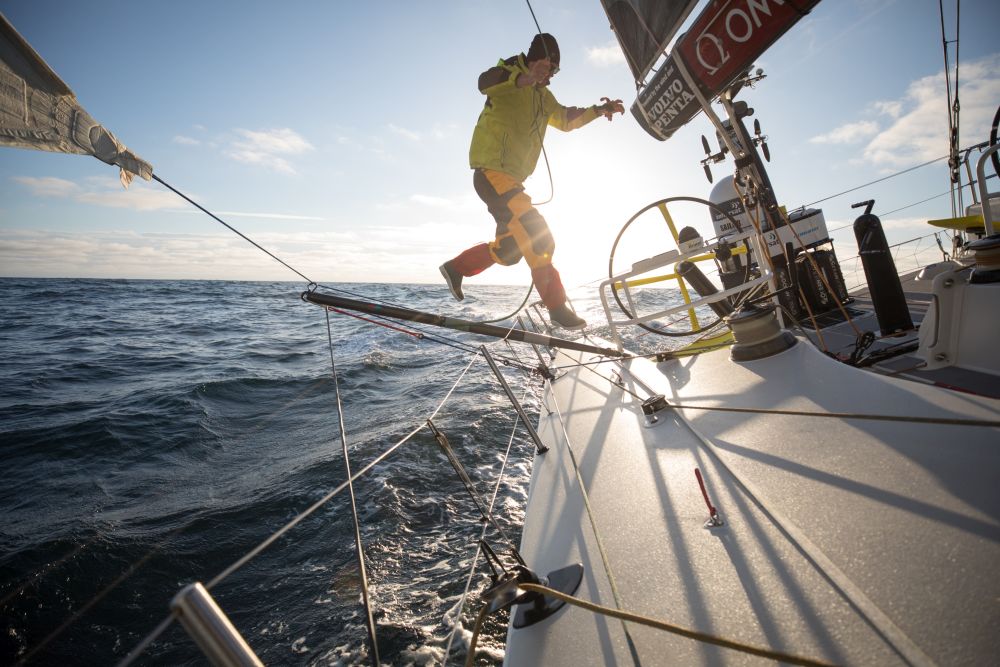 Team AkzoNobel and Team Brunel were racing practically neck and neck on Sunday as the Volvo Ocean Race fleet geared up for a nail-biting Leg 9 finale.

With less than 300 miles remaining to the finish line in Cardiff, Wales, the two Dutch boats were just two miles apart at the front of the seven-strong fleet and matching each other for speed.

Having broken free of the clutches of a high-pressure ridge west of Ireland that halted their fast progress across the Atlantic, the fleet faces one last hurdle – a cyclone off Land’s End, the most westerly point of England.

The depression will force the teams to sail upwind, tacking to take what they believe is the quickest route to the finish line. There will be an enhanced emphasis on tactics, sail selection and above all team work on the final miles to the finish.

Having had victory snatched from them at the last minute in Leg 8, Brunel are out to exact revenge on rivals MAPFRE and Dongfeng Race Team by defeating them in Leg 9.

At 1300 UTC Dongfeng were 32 miles behind them in third, with MAPFRE in fifth some 87 miles off the pace.

Brunel’s veteran skipper Bouwe Bekking said that with the two red boats taken care of, his crew would then set their sights on overhauling AkzoNobel in pursuit of their second leg win this edition.

“The finish looks tricky – we have to manage a low-pressure system just off Land’s End, England that means upwind sailing and tacking eventually, then one more park-up before sailing into the finish,” Bekking said.

“We expect Dongfeng will push hard south east as it’s their only way to have a chance to gain mileage on us. But it can be tricky for them as well – if they get caught in the low, it means no pressure.

“We can't control them if we’re sailing in a different weather pattern, so we can’t think too much about that. We have to make the right moves for what is the best for us.

“Objective number one for this leg was, and is, beating the two red busses, so that hope for overall victory is still alive.

“Let’s make that happen first and we feel we can pass the leader as well.”

AkzoNobel were equally fired up for the final fight in Leg 9.

“We’re ready for a long match race, potentially all the way to the finish line,” AkzoNobel’s Chris Nicholson said. “Everyone’s up for it.”

As well as the regular battle between the seven teams, a personal scrap between the race’s two Welsh sailors – Bleddyn Mon on Turn the Tide on Plastic and Trystan Seal on Sun Hung Kai/Scallywag – has developed, with each looking for bragging rights sailing into their home country.

“There are two Welshmen in the race and the race is on between them. We have Bleddyn Mon and Scallywag have Trystan Seal and we are racing to bring a local hero home,” said Dee Caffari, skipper of sixth-placed Turn the Tide on Plastic.

“I am sure both will be Welsh celebrities by the end of the stopover but this is now about bragging rights and we need to find our victories somewhere, however large or small.”

The Race Village in Cardiff officially opened on Sunday morning. The Welsh city becomes just the third port in the UK to host the Volvo Ocean Race, after Southampton and Portsmouth.

Current ETAs have the leading group finishing late Monday night and into the early hours of Tuesday morning, with the rest of the fleet following throughout the day.