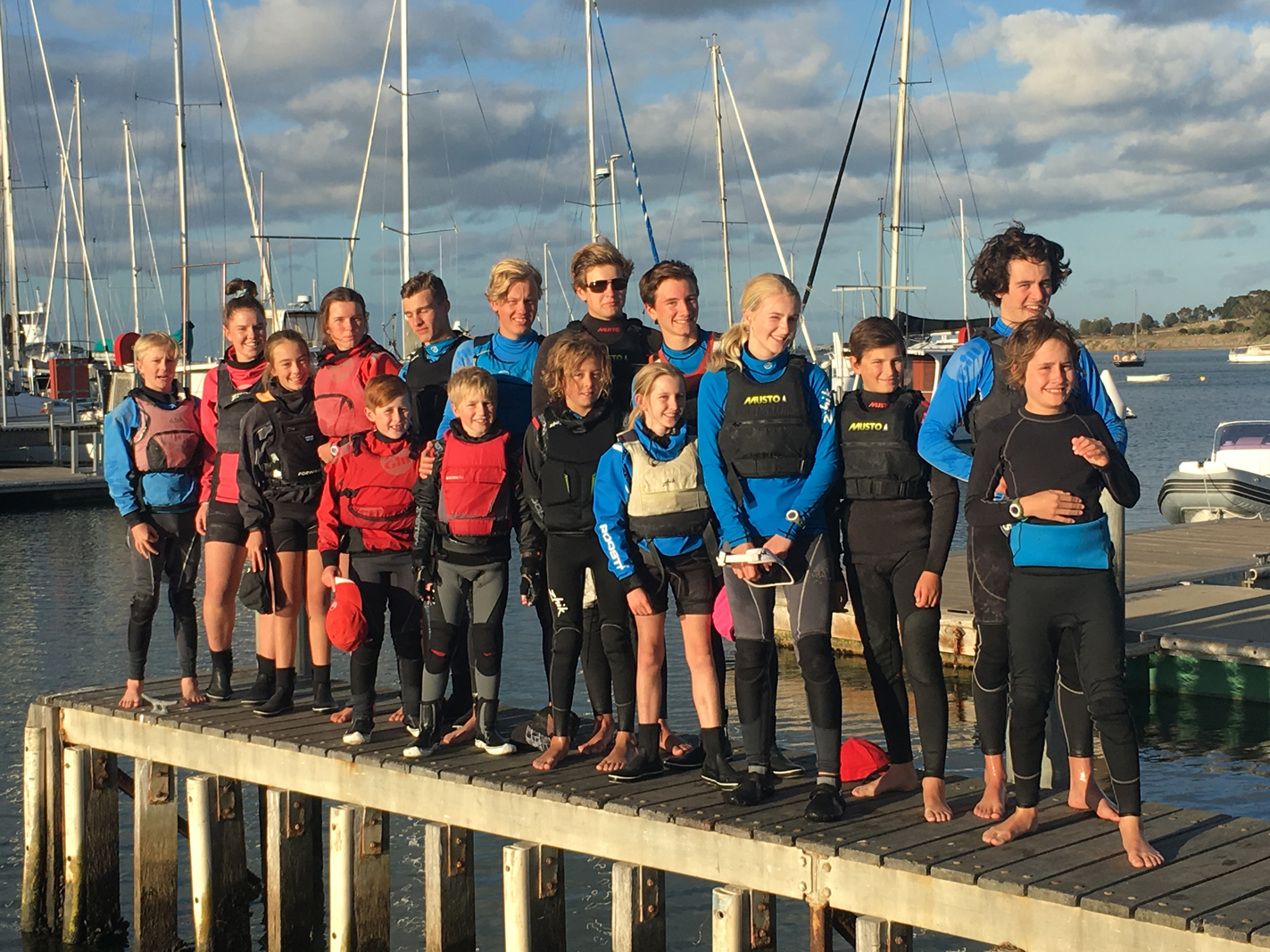 The Australian International Cadet team will head to Germany for the World Championship in July. Photo Harry Fisher.

Preparations are underway for the Australian International Cadet team as training ramps up ahead of the upcoming World Championships in Germany later this year.

The team of eight boats and 16 sailors was selected following the qualifying stage during the summer of 2017/2018 – a magnificent national championship conducted by the Metung Yacht Club in the Gippsland Lakes region of Eastern Victoria.

A total of 66 boats from four different states competed in the event where the top eight cadets were selected to represent their country at the world and promotional championship in Bodstedt, Germany. The regatta will be held from 26 July through to 3 August this year.

The excited young team has been training hard under the experienced and watchful eye of national coach Tony Bull, more affectionately known as Bully. Together, they recently completed a five-day training camp in Geelong and will have a ‘frostbite’ session in Hobart over the June long weekend prior to heading overseas in July. There will be a further one week training camp at the regatta venue in Germany from 18 July right up until the worlds start on the 26th.

The location of what is known as a German holiday destination and the organisation of this event at Bodstedt has been a labour of love for German Cadet Class personality 'Big Alex', who has promised the lake location on the coast of the Baltic Sea will offer flat water, but stronger breezes than many European centres. This will hopefully suit the Australian team, which traditionally finds lighter conditions to suit other countries a little better.

The team is spearheaded by the Sandy Bay Sailing Club team of Hurricane. This well-established Cadet duo is helmed by 16-year-old Jacob McConaghy, aka Spoon, who is attending his second world title, and crewed by the 9-year-old Sam Hooper, aptly known as Teaspoon, who is also attending his second world title. Last year this team were the highest placed Australians and Jacob won the best helm under the age of 16 so we are hoping to expect big things from them. Despite all the training, Teaspoon still prefers his Mum to help him get into the gear required for the chilly winter training in Hobart.

The Little Devil team, also hailing from Sandy Bay Sailing Club in Tasmania, is joining the team with 15-year-old Archer Ibbott, aka Bronte, on the helm and attending his third worlds – he has crewed once and skippered twice on the international stage. His 12-year-old crew James Gough, better known as Dipper, has been sailing with Archie for less than a year but is determined to do well in his inaugural world championship. He stated early on in the campaign that “pain is temporary, but glory is forever”. Wise words from a young and talented sailor.

The 16-year-old Peter Allen, known to his team mates as Pete, is on the helm of Spitfire, which hails from the Royal Yacht Club of Victoria in the Williamstown area of Melbourne. He is well supported by his 9-year-old crew Ashton Rawstron, aka Ashraw. While Pete has crewed in the worlds before, and competed well in the promotional regatta last year, this year will be his first as a helm in the Australian Team in the main regatta and it is Ashraw's first time crewing in a world championship. They're a bit greener on the international stage, but they're as eager as ever to perform.

The fourth boat in the team is Schmoken, and it is helmed by the 15-year-old Jack Allison, aka Jabba, and crewed by the 11-year-old “Noodle Head”, Luca Groves. Both of these young sailors are in their first world championship and are eager to be representing their country. They are the third boat from the renowned Cadet breeding ground that is the Sandy Bay Sailing Club and are looking forward to the opportunity of travelling overseas, having qualified for the worlds after Jack spent last season on the helm of a Laser 4.7.

The next Aussie boat is Ikon 10 and it is another that represents the Sandy Bay Sailing Club in Tasmania. Hugo Allison, known to his mates as 'Just Ham', while only 13 years old is known as the ‘old man' of the team, having previously won two national titles and one world title as a crew. This event will be his fifth world championship but the first time at the back of the boat. He is joined by 12-year-old Gracie Hooper as crew, whose primary aim is to beat her younger brother Sam. There is a rich Australian history of world championship crews becoming great skippers, so expect exciting things from this team.

The beautifully restored timber boat Anaconda, skippered by 15-year-old Elliot Hughes and crewed by 10-year-old Cate McCoy is the fifth member of the team and the first of three boats from Victoria's Royal Geelong Yacht Club. Anaconda has shown some history as being a magnet for other boats, which has kept Elliot's Dad busy on the hull repairs. While Elliot has represented Australia previously as a crew, this is his first time as a helm and Cate's first worlds altogether, having only recently joined Elliot in the boat.

Adding some 'sparkle' to the Aussie team is the 15-year-old Emma Kelly and the 12-year-old Ollie Grieve, who hail from Royal Geelong Yacht Club. Emma has been to three worlds as a crew and is now heading into her first international regatta as a helm, while Ollie is heading to his second world titles as crew. More affectionately known as ‘Em’n’Ol’, the duo are regarded as one of the chirpier crews in the team. Emma’s parents Mike and Mandy have supported their children through eight world championships and are breathing a sigh of relief that this will be the last

The 14-year-old Jarrah Harris Moore, known to the team as 'Pole Bender', and her 11-year-old crew Evie McDonald, sail on the Geelong-based Smooth Criminal. This is Jarrah's second season as skipper and Evie's second year as crew and while neither have been to a worlds before, they are showing rapid improvement. In a race at the 2018 Cadet Nationals in Metung, they received special acknowledgement for doing six penalty turns in very light winds on the start line following multiple protests, instead of the required two.

The Australian team are looking to working together and improving their skills so they can make the most of the opportunities provided by their parents and supporters. In total, the Australian contingent travelling to Europe equates to more than 50 people and they are sure to represent themselves, their clubs, and their country to the best of their ability and with the utmost pride.