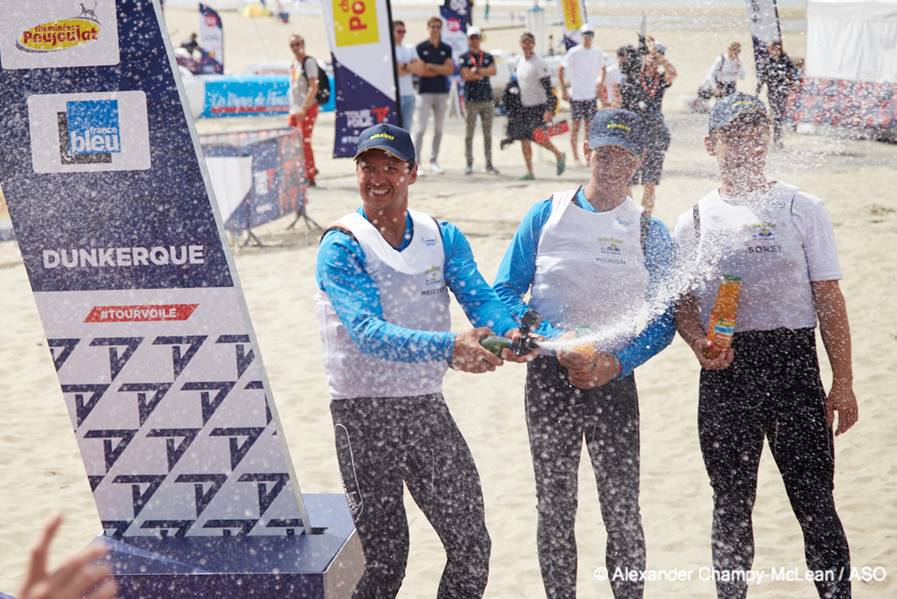 Light winds and strong tidal currents off Dunkirk’s Malo Les Bains beaches conspired to deliver surprises and upsets on the first day of the Tour Voile, as the Belgian team Caraibois BE.Brussels won the opening stage nautique Final, and two of the top seeds were effectively eliminated from the Final for jumping the start gun.

The strongly tipped Réseau Ixio-Toulon Provence Méditerranée skippered by Sandro Lacan, and Golfe du Morbihan Breizh Cola of Solune, sailed by Robert and Riwan Perron, were over the line early, so scored minimum points. The outstanding favourite, Robin Follin’s Cheminées Poujoulat, started slowly in a gentle 4-6 knots of onshore breeze and was forced to catch up.

In contrast, the Belgian flagged team, considered outsiders among the eight finalists, started smartly and with speed. They were quickly able to eke out a small lead which they increased to finish ahead of last year’s runners-up, Team Beijaflore in second, with Cheminées Poujoulat in third.

Local Dunkirk ace, Clément Meister, led his team to a surprise win. A product of the Voile Ambition Dunkerque initiative, Meister learned his Tour skills under Bertrand Pacé and ironically was on board the last time the Be Brussels team won, back in 2012 on the M34 monohull.

Meister raced for three years on the Dunkirk team’s Diam 24 OD, but in today’s very gentle breezes, it was more about racing in the best streams of current and keeping the boat moving.

Meister grinned on the podium where he was accompanied by his family dog, “This morning there was no way we considered there was a chance we might win today. We are still a bit shocked that tomorrow we will be flying the blue gennaker for the leaders of the General Classification.

In the light winds of the day, it was essential to know the water well, especially the flow of current.

Neither Beijaflore nor Cheminées Poujoulat won the first day, but both top seeded teams finished well on a day their rivals faltered.

Beijaflore’s Valentin Bellet was content with their second: “We hit our goals. We have been consistent through the day. Our confidence took a bit of a dent just before we came here so we needed to re-establish that. We know what to expect and have prepared to try and go one better this time.”

Cheminées Poujoulat’s skipper, Robin Follin, echoed the words of his rivals, “ We know we have good speed and we generally make good strategic choices, so we kept the risk very low today.

“The start of the Tour in such complicated conditions can be very tricky. So we just strived to stay consistent. That was really the idea. Third place means we realise that objective.”